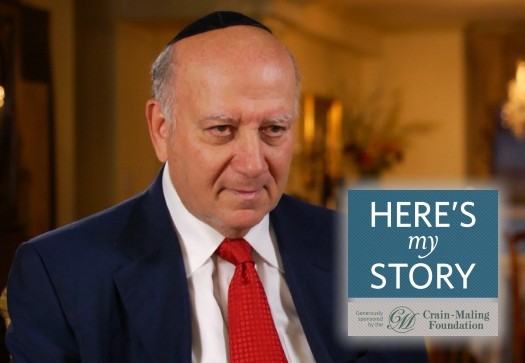 Judge Jerome Hornblass served for 17 years as Justice on the New York State Supreme Court. He is presently a U.S. Administrative Law Judge. He was interviewed by JEM’s My Encounter with the Rebbe project in his home in New York City in January of 2012.

In 1973, when Abraham Beame was elected mayor of New York, he appointed me as City Commissioner of the Addictive Service Agency. I thus became the first Orthodox Jew to head up a major city agency, which was responsible for developing a network of prevention programs to keep young people from getting involved with drugs, as well as for setting up a network of treatment programs for drug and alcohol addiction.

Shortly after my appointment, I had an audience with the Lubavitcher Rebbe. I had met the Rebbe before and attended many of his farbrengens but, on this occasion, I came to talk to him one-on-one about my role as a City Commissioner and as a Jewish public servant – about what people expected of me and what I should do.

The Rebbe was very forceful about one responsibility that I had – to make sure that I take care of the Jewish people. I said to him, “But my agency is involved with people addicted to drugs – to heroin, cocaine, marijuana, alcohol. That’s not a Jewish problem.”

The Rebbe contradicted me. “Yes, it is. There are many Jewish people who have problems with addiction, and you should make sure you take care of the Jewish people first.”

I repeated, “But really, it’s more of a non-Jewish problem.”

He said, “It’s a Jewish problem also. And you have to make your people your priority. If you express Avahas Yisrael, if you demonstrate your love for the Jewish people, the non-Jews will respect you more. They will see that you are not ashamed of who you are.”

He spoke about this at length. He said that, of course, I had a responsibility of taking care of all people, and I had to make sure that public services were dispensed to Jews and non-Jews alike. But he stressed that, within the framework of taking care of all people, I should not be ashamed of helping the Jewish people. Jews involved in the government often bend over backwards not to do anything for their fellow Jews, erroneously thinking this makes them appear unbiased. There have even been instances throughout history where Jews in positions of power, instead of helping their fellow Jews, actually harmed their fellow Jews. So the Rebbe stressed that I should avoid anything like that. Of course, I should help everybody. But I shouldn’t leave out the Jews, and I shouldn’t do anything that would be harmful to the Jews.

I took his words to heart. In 1974-75, when the budget crisis hit New York, I made sure I followed the Rebbe’sadvice. At the time, we had to cut tens of millions of dollars in programs. This meant that many people lost their jobs, and many people were very upset with me. And they said to me, “Cut out your Jewish programs.” But I responded, “I’m not going to do that. I’ll treat everybody the same, no more, no less – the budget cuts will be uniform.”

They were very angry with me. When I came to meetings, people shouted at me and threatened me – even threatened my life – and since some of them had criminal backgrounds, it was a very difficult time for me. Very, very difficult. But I always had in my mind what the Rebbe said – that I needn’t worry as long as I take care of the Jewish people, and in the end, the non-Jews will respect me more for that.

Then one day in February 1992 – I believe it was the last time he gave out dollars – the Rebbe looked at me and said, “Oh, tekiyas shofar,” meaning “sound the ram’s horn.” I thought that perhaps because of his eye problem he didn’t recognize me, but I couldn’t figure out what he meant by that. Now, my name – Hornblass – does mean “horn blower,” and my whole family, going back to my great grandfather and including me and my sons, have served as baalei tokeya, blowing the shofar on the High Holidays. But what the Rebbe said didn’t make complete sense until I met Rabbi Zev Katz, the gabbai, caretaker, of the shul at the Chabad Headquarters.

Rabbi Katz said to me, “Maybe you remember me – my mother was a patient at Memorial Sloane Kettering Hospital this past Rosh Hashanah, and you came to blow the shofar in her room.” Suddenly, it hit me: “Did you, by any chance, tell the Rebbe about this?”

“Right after Rosh Hashanah, I told him,” he said.

This was just like the Rebbe – he had a tremendous, tremendous memory. And he also had a tremendous ability to see into the future and to give the right advice. Whenever I met him I was riveted by his eyes, which seemed to be seeing something otherworldly. I had the feeling of being in the presence of somebody of great spiritual power – of a giant among men.