« From Days Gone By: Walking Down the Aisle
Man Indicted for Killing Girlfriend in Crown Heights Crash » 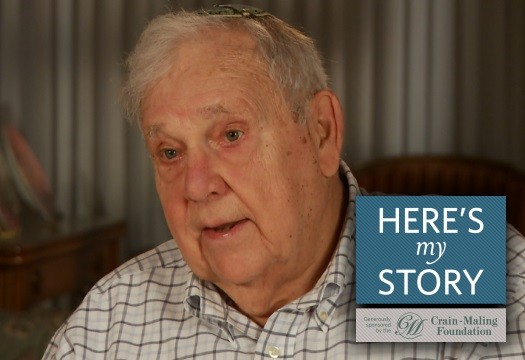 Mr. Arnold Dalfen currently lives with his family in Montreal, Canada. He was interviewed by JEM’s My Encounter with the Rebbe project in his home in January of 2011.

I grew up in Montreal, where I attended the Chabad yeshiva, which had been started by nine of the Previous Rebbe’s emissaries who had escaped war-torn Europe to Shanghai. From there, they made their way to Montreal and started a yeshiva with about two dozen boys, of whom I was one.

In 1941, the war was still raging, and my teachers wanted very much to see the Rebbe in New York and get a blessing from him. The first one to get a passport was Rabbi Menachem Zeev Greenglass, and he agreed to take a few others with him on the trip, which took place at the end of Passover week. My two uncles went and I went.

That is how I met the Previous Rebbe and also his son-in-law, the future Rebbe. I’ll never forget the experience as long as I live, for when the Rebbe spoke I felt that I could see the Shechinah, the Divine Presence, on his face. That is a very special memory from my youth.

After I left yeshiva, I went into business, but I remained close to my yeshiva teachers, especially Rabbi Aryeh Leib Kramer. He was the person I consulted in times of trouble such as when my wife had a hard time conceiving, and we discovered that the problem was with me.

The cause was what happened when I was perhaps nineteen or twenty years old. At that time, I started losing my hair. As male pattern baldness was common in my family, my sisters started to fret, “You’re going lose all your hair … you’re going be bald.”

One of them found a doctor in Montreal who was dispensing drops which worked miracles, and I got a prescription for this medicine. I was living in Val-D’Or at the time, which is around 350 miles from Montreal, so I didn’t go for periodic check-ups like I was supposed to. Instead, I just kept renewing the prescription again and again. It did, in fact, work miracles, because my hair stopped falling out. Unbeknownst to me, there were hormones in that medicine which affected my whole system, and this was the reason my wife could not get pregnant.

When Rabbi Kramer heard my tale of woe, he said to me, “You must go down to New York and get a blessing from the Rebbe.”

So this we did. Rabbi Kramer arranged an audience for us, and we explained the problem to the Rebbe.

His advice to us was that we move from the rural area where we were living into the city – like into Montreal, where there was a mikvah. Living in the sticks as we did forced my wife had to travel ten hours just to reach the mikvah, and doing this on a regular basis was very hard for her. But the Rebbe said we had to move where we could keep the Laws of Family Purity, Taharas HaMishpacha, very carefully. These laws mandate that the woman is to immerse in the mikvah on a monthly basis.

The second part of his advice was that I should seek treatment from a certain Dr. Simanovitch in Canada.

The doctor heard that and tried, but his treatment did not work. Nothing worked for quite some time.

Meanwhile, the Rebbe took a special interest in us. I don’t know why but we must have found grace in his eyes and we would receive letters from him. In one letter he wrote, “I haven’t heard from you in a long time. How come I don’t hear any good news from you?” That was amazing to us – that he remembered us and cared about us so much.

Finally, after two years, my wife became pregnant and our first child was born, a boy. After that, with the Rebbe’s blessing, we had two more children, a boy and a girl.

When we were trying to name our firstborn we couldn’t decide if we should name him after my father or my wife’s father. We wrote in to ask the Rebbe but he didn’t reply. So we made up our own minds about it and named the boy Shlomo after my father.

A while later, I sent a couple of bottles of vodka for the Rebbe’s farbrengen with Rabbi Kramer and heard back from him a most amazing story. When the vodka was poured, the Rebbe raised his glass and said, “L’Chaim to Shlomo!” Rabbi Kramer hadn’t told him what we decided to name the baby, but he knew anyway.

Sometime later, in the 1960s, I was going through a bad phase financially, and I sought the Rebbe’s advice because I wanted to start another business. He gave me advice, and he also gave me a loan – $3,000, which was a lot of money in those days.

When he made the offer of the loan, he said it was on the condition that I keep Shabbos. I told him that I couldn’t because Fridays and Saturdays were crucial to the success of the business.

The Rebbe then directed me to Rabbi Yitzchak Hendel in Montreal and said that Rabbi Hendel should issue me a Shtar Mechira, which would allow me to sell my business to my non-Jewish manager for Shabbos. In other words, I would own the business for five days and my manager would own it for two days.

I’ll never forget what the Rebbe said: “Make sure you follow what I say, and remember – I’m your partner.”

I went to Rabbi Hendel who at first did not want to issue the Shtar Mechira, but when he heard that I was following the Rebbe’s instructions, he agreed.

The business was successful, and it evolved into something else which did not require me to be open on Shabbos. And two years later, I was able to repay all the Rebbe’s money.

We came to see the Rebbe often, and as the kids grew up I brought them along. I remember one time I brought the two boys – they were six and five at the time. And the Rebbe asked my older son Shlomo, “What is the most important of the Ten Commandments?”

We were having a bit of a problem with Shlomo at the time – he was not as obedient as he should have been – and it was as if the Rebbe sensed that.

Then the Rebbe answered his own question, “Honor your father and your mother.”

That made a big impression on Shlomo. The Rebbe – with his usual amazing wisdom – hit it right on the spot, as he always did.

In the following video, you will see part of an interview with Mr. Arnold Dalfen where he describes his first visit to the Previous Lubavitcher Rebbe, Rabbi Yosef Yitzchok Schneerson:

« From Days Gone By: Walking Down the Aisle
Man Indicted for Killing Girlfriend in Crown Heights Crash »