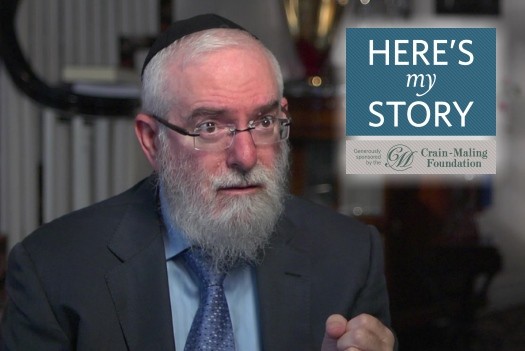 Rabbi Eliezer (Leizer) Laine lives with his family in Brooklyn, New York. He was interviewed in JEM’s My Encounter studio in August of 2014.

In 1973, I was offered a job to establish and direct a Jewish day camp in Flatbush, New York. It was a significant project enrolling about 75 to 100 children at the start. But my wife and I threw ourselves into the job so wholeheartedly that, when the camp opened, we had more than 200 children.

That summer – which was not long before the Yom Kippur War – the Rebbe was speaking at every opportunity about the obligation of each Jew to see to it that every Jewish child get a Jewish education, and he also spoke in favor of day camps for all Jewish children.

Although the organization that had hired me was not a Chabad organization, since I was Lubavitch, I naturally wanted to fulfill the Rebbe’s instructions. So I met with the board of directors and asked them to expand the camp to children who could not afford the tuition. The board agreed.

I dedicated one full bus for non-paying children, and I wrote to the Rebbe that this is what I did. The Rebbe responded with a blessing that the camp should be a great success.

In the middle of the summer, I received an invitation from the Rebbe to bring my children to the next children’s rally at the Rebbe’s synagogue. The Rebbe himself would be attending the gathering. Although it was primarily Lubavitch children from the neighborhood who took part, the Rebbe singled my camp out for inclusion. I felt this was a great honor.

We collected the children and we came to 770 Eastern Parkway. When the afternoon prayers were finished, the Rebbe announced, “Leizer Laine and his camp should come up to receive coins to give out to charity.”

We walked up with the camp in two groups – boys and girls – and the Rebbe gave each child a coin.

Now some of the counsellors had just come from an outing and they were not dressed properly for a synagogue and they were embarrassed to go up to the Rebbe in shorts and flip-flops. They felt that would not be respectful.

After the Rebbe distributed the coins to the children, he turned to me and asked, “Did everybody in your camp get money for charity?”

I didn’t know what to say. I couldn’t say yes because I knew that some of the counsellors did not come up. So I didn’t say anything. I just stood there and looked at the Rebbe.

So the Rebbe announced, “All those that didn’t get yet, should come up and get.”

I walked over to my group, and I said, “Ladies and gentlemen, apparently the Rebbe noticed that there is a group that didn’t come up to get  coins for charity. The Rebbe doesn’t care how you are dressed. So come up. Get a coin from the Rebbe, and it should be for a blessing.

And they all walked up. They came up to the Rebbe, and the Rebbe gave each of them a big smile along with the coin.

Every time I remind myself about that smile of the Rebbe, I get the shivers. I bumped into some of the counsellors many, many years later. And they said to me, “The smile that we got from the Lubavitcher Rebbe stayed with us. We live with it.”

While I am speaking about the Rebbe’s smile, I’d like to tell another beautiful story on the subject.

I don’t remember exactly when this happened – it was in the mid-1980s when I was in business, running a furniture store.

A gentleman came into my store and started looking around, walking up and down the aisles. I asked him if I could be of help, but he said, “No, thanks,” and he walked out. He came back again a few more times, and each time he didn’t buy anything and didn’t want my help, although each time he chatted with me. Then, one day, he walked in with his wife, and he asked if I would join them for a conversation.

He said, “We know you’re a Lubavitcher, and this is why we’d like to tell you about a problem we have. We’ve been married a few years, and we don’t have any children yet. We have consulted with various doctors … we have gone to various rabbis for blessings. And we want to ask you: Could you go to the Lubavitcher Rebbe and ask him for a blessing for us?”

By then, I knew this man well enough to know that he was raised in an environment totally opposed to chasidic ways and particularly opposed to Chabad-Lubavitch. So I was shocked.

Still, I told him, “Listen, the Rebbe answers anyone that writes to him. Sit down, write a letter to the Rebbe, tell him your problem and ask for a blessing.”

He said, “We don’t believe in writing to the Rebbe. Why can’t you speak to the Rebbe for us?”

I said, “I would also only write a letter. But your cry is coming from a deeper place than any request I could make on your behalf.”

He refused, but then he asked, “Is there ever a time that I could walk up to the Rebbe as he passes by and talk to him?”

I said, “Erev Rosh Hashanah, the Rebbe’s door is open and whoever wants can pass by the Rebbe and get a blessing for a good new year. So you could stand in line and you can ask for a blessing for children.”

He liked that idea. He came with me and we stood in line for about two hours. But when his turn came up, he couldn’t speak. It was as if his lips were glued together and nothing came out.

Afterwards, he was practically crying, and he wanted to go back in line and try again.

I told him, “You know what – here’s what you should do: In a week’s time, Erev Yom Kippur, the Rebbe will be giving out lekach, honey cake. If you’d like, we can meet in the same place, same time, and we’ll do the same thing. You’ll pass by the Rebbe, and you’ll have another chance to ask when he gives you a piece of lekach.”

So now this is what happened: We stood in line, and when he came up to the Rebbe, he stuck his hand out for the lekach, but instead of asking for the blessing, he just cried out with his whole heart, “Rebbe!” He couldn’t say anything more. And the Rebbe said to him, “Zara chaya vekayama – May you have healthy and viable children.”

He was totally shocked. He couldn’t believe what just happened. He said, “But I didn’t say anything. How did he know?!”

I said, “The Rebbe read your eyes!”

Now, that’s not the end of the story, because the following year, he came to see the Rebbe again Erev Yom Kippur, carrying his newborn baby.

He walked over to the Rebbe holding that tiny baby, opened the baby’s hand, and the Rebbe put a piece of lekach there.

When he did it, the Rebbe gave him such a smile. I’ve seen smiles, but this smile I lack the words to describe. It was a smile that lit up the world.