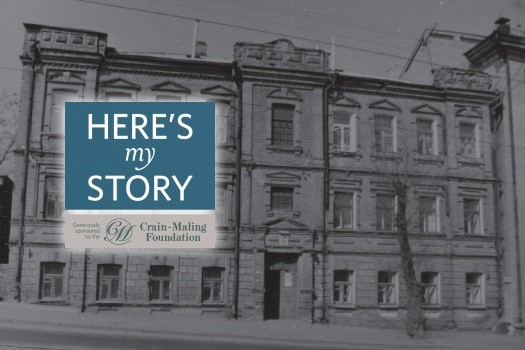 Mrs. Raizel Goldberg lives with her family in Brooklyn, New York. She was interviewed in the My Encoutner studio in Brooklyn in November of 2013.

My grandfather, Shneur Zalman Vilenkin was from Dnepropetrovsk, which in his day was called Yekaterinoslav. This was the place where the future Rebbe’s family also lived at the time. The Rebbe was just a boy then – for this was in the early 1900s – and he would come, along with his two little brothers, to my grandfather’s house to learn.

My mother remembers that these three boys always came very well dressed, and that they were very clean, very neat, very polite. My grandfather would learn with them for the allotted time, and then they would leave. How long this went on, I don’t know.

One time, when the Rebbe was already a young man, he came over and asked for my grandfather. My mother had answered the door and informed him that my grandfather wasn’t available. He told my mother, “I just came to return a book that I borrowed. I want to make sure that he gets it.” So my mother took it and thanked him.

My grandfather would often tell us about the Rebbe’s wedding celebration which took place in 1928 in Yekaterinoslav. Although the Rebbe got married in Warsaw, his own parents were not there because they were not permitted to leave Russia. So they arranged a second celebration in their home. My grandfather was there, and he danced the night away and even danced on the table – this is a known story.

After the war, our family – my grandfather included – left Europe and eventually moved to New York. And when we got here, my grandfather wanted to meet with the Rebbe. This was probably in 1955, though I am not sure.

At this time, my grandfather was partially paralyzed, so it was very hard for him to walk and very hard for him to stand. When he walked into the Rebbe’s office, he naturally wanted to do the respectful thing and stand, but the Rebbe insisted he sit down. He continued to stand, but the Rebbe said, “Many years ago, you and I sat across from each other on a table; we can sit across from each other at a table again.” That convinced my grandfather and he sat down.

The Rebbe just would not allow my grandfather to stand in his presence, and he later told one of my uncles that my grandfather “hut mir avek geshtelt auf de fees – put me on my feet.”

Although my grandfather lived on Lincoln Place which is very close to the Chabad Headquarters, he rarely attended the farbrengens there. Why? For one thing, because it was very hard for him to walk, but also because of what would happen when he got there.

My grandfather felt bad about making all these people stand while he came and went, so he wouldn’t go often in order not to inconvenience the Rebbe and his chasidim.

In 1963, my grandfather got sick. It was Lag B’Omer, which happened to fall on a Sunday. We notified the Rebbe that he was not well and had to be hospitalized. As soon as he heard, the Rebbe called my aunt and said, “Do you mind if I send a nurse to the hospital? I want him to have twenty-four-hour care, and I will pay for it. Also, I would like to send a certain specialist to see him.”

Of course, my aunt agreed and expressed the family’s gratitude.

At the time, I was young, a student at a school in New York, and I remember coming to the hospital and hearing how the nurses were all abuzz because this famous doctor came to see my grandfather at the request of the Rebbe.

When my grandfather passed away, it was Thursday, late at night. Friday morning we had the funeral. The Rebbe participated in the funeral and came all the way to the cemetery, but he stayed at the gate, watching the burial from there. He stood there the whole time while the funeral was going on, and he left only when it was over.

Afterwards, we got a phone call with a message from the Rebbe apologizing for not participating in the funeral. He explained that, whenever he goes to the cemetery, he always visits the resting place of his father-in-law, the Previous Rebbe, and when he does that he needs a lot of time for preparation. On this occasion, so close to Shabbos, there was not enough time for preparation, so he couldn’t come in to the cemetery. And he wanted to apologize to the family for that.

He also had two requests:

His second request was that on the headstone it be written that my grandfather had been his teacher. The Rebbe obviously knew that his teacher would be accorded the greatest honor bychasidim if they knew that he had been the Rebbe’s teacher. My uncle and my father decided on the exact wording; they showed it to the Rebbe and he approved. He also offered to pay one-third of the cost of the headstone, and it is a very large headstone.

That is how much respect he had for my grandfather, who was his childhood teacher when he was a boy. Even though it was a very long time ago, he never forgot and he showed his respect and gratitude in so very many ways to the man who, as he put it, “hut mir avek geshtelt auf de fees – put me on my feet.”