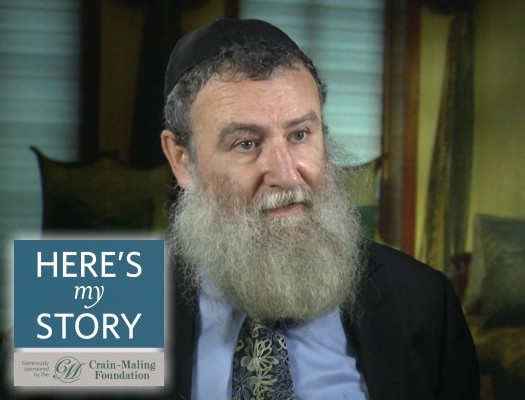 Rabbi Pinchas Woolstone, served as rabbi of the Jewish House Crisis Center in Sydney, Australia, for over twenty years. He was interviewed by JEM’s My Encounter with the Rebbe project in Brooklyn, New York, in December of 2013.

I was raised in a traditional Zionist Jewish home in Sydney, Australia. While on a visit in Israel, I became attracted to Chabad-Lubavitch and, upon return to Australia, I enrolled in a Chabad yeshiva, which eventually led me to learning in New York. That is when I found out I had Chabad ancestors – including the Tzemach Tzedek, the third Rebbe of Chabad – and I became a loyal follower of the Chabad Rebbe.

While I was in New York, I was approached by a prestigious rabbi from another chasidic group, who told me about a family that was searching for their long-lost daughter. She had been born and raised in Boro Park, and she had married there; unfortunately, the marriage ended badly, but her husband – for whatever reason – refused to agree to a divorce.

After this went on for a period of time, she “snapped” (to use a slang term), and she suddenly disappeared. Her family had learned that she had gone to Australia, but they had no idea where. Since I was from Australia, the rabbi w

approached me thought that maybe I could help them bring their daughter back to her people.ho

I said, “Australia is geographically the size of the United States. Looking for someone there without an address is like trying to find a needle in a haystack.”

Before returning to Australia I had an audience with the Rebbe, so I told him this whole story. He asked, “When are you going back?”

I said, “I’m going back Wednesday.”

He said, “Sometime after you get back, maybe the week after, you should take a trip to Brisbane.”

He didn’t explain why I should do this, but, of course, I would follow the Rebbe’s instructions without question. So, when I returned to Australia, I got on a plane to Brisbane.

Now, Brisbane is a northerly city, about an hour’s flight from Sydney, and it has a very small Jewish co

mmunity. At that time, there was no Chabad emissary in Brisbane; Rabbi Levi and Dvorah Jaffe had not yet arrived in town, so it was a desolate place, Jewishly speaking.

Flying there, I found myself sitting next to a well-dressed, non-Jewish woman who identified herself as a Greek Orthodox Christian. Seeing that I was Jewish, she began asking me theological questions concerning the Hebrew Bible. Toward the end of our conversation, she asked me something peculiar: “What is the Jewish view of a person who leaves the Jewish faith? Is such a person allowed back in, or is the door bolted?”

I answered, “Nobody can ever be separated from Almighty G-d, and if somebody has, for whatever reason, taken a vacation from commitment to Torah but then decides to come home again, the Jewish community will welcome that person with open arms.”

Then she said, “I want to tell you something – I own a chain of dress shops around Australia and, in Cairns, I have a shop which employs a Jewish girl. She came from a very religious home in New York and I can see that she’s living a very different life here from how she was brought up there. She tells me she’s happy, but I can tell that she’s not, and I believe that she would be better off back in her own community.”

At that moment, bells started ringing in my head. Here I am going to Brisbane on the Rebbe’s instructio

ns without knowing why I am going there. And on the way, I meet a Greek Orthodox Christian woman who is telling me about a Jewish girl who left home. Realizing what this could mean, I suddenly got goose pimples all over my body, and I started to shake.

I said to the woman, “You should know that I am going to Brisbane without knowing why I am going there. I am doing this because a Rebbe in New York, who is probably the greatest living sage of our time, told me to do so. He told me to do so after I asked him how I could find a lost Jewish girl.”

When I said that, the Christian woman started to shake as well. “Maybe she’s the one,” she said. “Maybe this girl working for me in Cairns is the one.”

I had to admit that she could be right. The woman immediately offered to facilitate everything and to pay all costs involved, so that I could meet this girl – though I declined her offer.

From Brisbane, I flew to Cairns, and I walked into this dress shop. She wasn’t there because the salesgirls worked in shifts and her shift had not started yet. I went off to buy myself a Coke, but I was so nervous, I bought a beer instead.

When it was time, I walked back to the store, and there she was. This was the girl I was looking for! Obviously she was not dressed like a religious girl from Boro Park, and she was clearly surprised to see me there – a chasid visiting a women’s dress shop at the end of Australia, where she thought she could get away from her people.

I said, “My name is Pinchos Woolstone, I’m a Lubavitcher…” I was trying to find the right words, how best to explain what I was doing there. I decided it was best to just tell her what happened, which is what I did. Then I asked her, “Are you willing to talk to me?”

I said, “I’ll come back when the store closes.”

She wasn’t overly enthusiastic. She said, “All I want – all I ever wanted – is a get,” referring to the Jewish divorce document.

I said, “But you are not religious; what do you need a get for?”

She said, “If you can help me with a get, that’s good. But if not, then just leave me alone.

I called the people back in New York, and they managed to finally arrange her get. While I was making these arrangements, I met with her again, and I said to her, “To be honest, your reaction to what happened to you is underst

She heard me.andable. But getting divorced from your husband doesn’t mean you must divorce yourself from your family, from your community, from Torah and G-d.”

After she received her get, she came back to America and enrolled in a university. This was, of course, a path far removed from her Boro Park roots, but at university she connected with the local Chabad emissary and began attending the Shabbat dinners he organized once a month.

Little by little, she became Torah-observant again. Today she is religious; she is married again, and a mother of a beautiful family. And that chain of events began when the Rebbe said to me, “Go to Brisbane.”