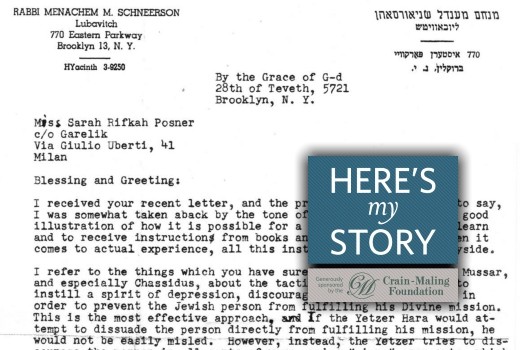 Mrs. Sara Rivka Sasonkin has been teaching in Chabad schools in Israel for the past 43 years. She was interviewed in JEM’s My Encounter studio in New York in November of 2014.

I am the daughter of Rabbi Sholom Posner who, for many years, operated a Yeshiva Day School in Pittsburgh. That’s where I was raised and that’s where I went to school until age 12, when I was sent to a Bais Yaakov seminary in Williamsburg, Brooklyn.

It is from this time that my memories of the Rebbe begin. I and another girl would walk from Williamsburg to Crown Heights to observe the Rebbe’s farbrengens. I always waited for the Rebbe to look in my direction as he was passing by, because the Rebbe’s smile would light up a room.

I had previously accompanied my parents when they went to see the Rebbe about matters dealing with theyeshiva, but my first private audience came in 1960 when I was finishing teacher’s seminary, and I was trying to decide what to do next. I had four options – to teach at my father’s school in Pittsburgh, to accept an offer from a school in New York, to travel to Eretz Yisrael, or to join my sister Bessie in Milan, where she and her husband served as Chabad emissaries. I didn’t know what to do and I made an appointment with the Rebbe to seek his advice.

I was very nervous and worried about how I would begin explaining everything. Then my turn came and the door opened. As I walked in, the Rebbe was sitting behind his desk, writing something, and he lifted his head. “Good evening, Miss Posner,” he said. I wasn’t expecting that, and I just burst out laughing. My nervousness completely left me.

The Rebbe asked me lots of questions – why I was so thin and had dark circles under my eyes – and I explained that I was studying very hard for final exams, plus also teaching in another school. So the Rebbe gave me a blessing that I should be successful in all my endeavors. He also told me not to worry about what to do next year, just to take some time off and relax.When the audience was over, I didn’t want to leave. It was so good and warm to be in his presence. His kind, fatherly smile reassured me.  When I finally walked out I felt like I was walking on a cloud.

At the end of that summer, the Rebbe told my parents that I should go to Milan to help my sister. I was thrilled. At the time, only married couples were sent as the Rebbe’s emissaries abroad, and I was just a teenage girl, seventeen years old. So this was a very big honor. I was a little concerned about not knowing the language, but the Rebbe said that it would be okay because I would be working with small children and language would not be a barrier.

I came to Milan and I taught kindergarten. I was working seven days a week, and also trying to learn Italian. After a few months of this, I began to feel quite overwhelmed by the amount of pressure I was under. And so I wrote a long, very emotional letter to the Rebbe about it.

I got back a most amazing letter – sent “Special Delivery” – some of which I would like to quote here:

“I received your recent letter and … was somewhat taken aback by the tone … You have surely learned in books of Mussar (ethical works) and especially Chassidic teachings about the tactics of the yetzer hara, the evil inclination, to instill a spirit of depression, discouragement and despondency in order to prevent a Jewish person from fulfilling his Divine mission … This is exactly what has happened in your case, and I’m surprised that you do not realize it…

“You surely know of the saying of the Baal Shem Tov that a soul comes down to live on this earth for a period of seventy to eighty years for the sole purpose to do another Jew a single favor materially or spiritually. In other words, it is worthwhile for a Jewish soul to make that tremendous journey and descend from heaven to earth in order to do something once for one fellow Jew.

“In your case the journey was only from the USA to Milan, and can in no way be compared with the journey of the soul from heaven to earth. And however pessimistic you might feel, even the yetzer hara would have to agree that you have done not only a single favor, but numerous good deeds, and even only your work with the children of the gan (kindergarten) would have justified it … Not to mention the fact that your arrival in Milan has undoubtedly considerably encouraged also your sister and brother-in-law, and has inspired other young people on similar missions.

“If it seems to you that you have been left to carry the ball yourself, it is surely only because there is confidence in you, and that since you have been sent to Milan, you undoubtedly have the ability, qualifications and initiative to do your work without outside promptings, etcetera.

“Since one is only human, it is not unusual to lapse occasionally into a mood of discouragement. But … if you do find yourself in such a frame of mind, you should not try to conceal it … For our Sages have said when a person has an anxiety he should relate it to others, for getting something off one’s chest is in itself already a relief.

“One should also bear in mind, as the Alter Rebbe has stated most emphatically in the laws of learning and teaching Torah, that a person who is engaged in teaching children should especially take care of his health since it directly affects the success of the work. I trust therefore that you are looking after yourself in matters of diet and rest, etcetera, and that you will always be in a state of cheerfulness and gladness. Hoping to hear good news from you. With blessing…”

Ever since I got this letter, it has been one of my “rechargers.” It’s a letter that I read very often and quote from.

The Rebbe was so responsive to my feelings. He knew exactly how to speak to me, how to relate to my every emotion, and how to communicate his caring to a young girl. And, of course, it made me feel very, very, very good.