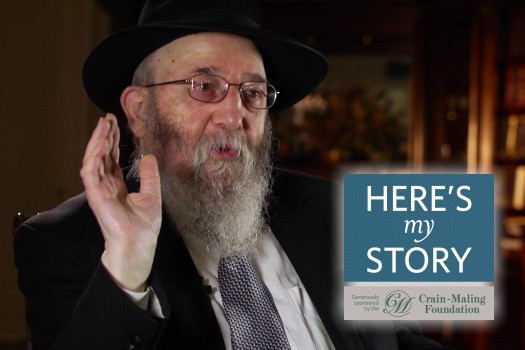 Rabbi Ephraim Rosenblum is the assistant principal of the boys’ school at the Lubavitch Center Campus in Pittsburgh. He was interviewed in JEM’s My Encounter studio in New York in February of 2012.

I was born in 1935 in Montreal, Canada. As a youngster, I went to a Jewish school where the practice was to take off one’s yarmulke for secular studies. There I learned a bit of Torah and Hebrew, and after school, I attended a Lubavitch afternoon school, and in the summers also a Lubavitch camp.

Later, when the Lubavitch school became an all-dayyeshiva, I learned there full time. I was a very good student, but after my Bar Mitzvah, I decided to leave Montreal and to learn at Yeshiva Torah Vodaas in New York. That was in 1948.

But once I landed in New York, even though I was at Torah Vodaas, I came to all the Lubavitcher farbrengensin Crown Heights that I could. And in 1951, when I was 16, I had my first audience with the Rebbe.

I was told in advance that it was not proper to sit in front of the Rebbe, but he invited me to sit down nevertheless, and even though I was just a teenager, he spoke to me like you’d speak to a respected person.

He asked me what I was learning in yeshiva, and I told him that I was learning Mesechtas Gittin which is the tractate of the Talmud that speaks about divorce. And he said to me, “You know, the concept of divorce, in a spiritual sense, applies to every single Jew. Why? Because we all have to divorce our yetzer hara, our evil inclination.”

He also told me that my yeshiva learning should include time for Mussar – that is, Jewish ethical behavior – and also time for Tanya, the seminal work of the Alter Rebbe, the 18th century founder of the Chabad Movement.That is what I remember from my first private audience with the Rebbe.

A year or so later, my parents wanted me to leave yeshiva and go to college. They were concerned that I needed a college degree in order to make a living. I didn’t want to leaveyeshiva, so I told them that I would go to college only if the Rebbe said I should go.

And this is how I came for my second audience with the Rebbe. When I asked him about going to college, he said, “Until age twenty, you should not go.” So I asked the obvious question: “And when I’m twenty, should I go?” He responded, “By then the Moshiach might come and redeem all the Jews, and you’ll be included with them, so why worry what’s going to be when you’re twenty years old?” That was his answer.

The Simchas Torah of 1953 I spent with my sister who earlier that year had married a Lubavitcher chasid. Just after Simchas Torah, my sister had an audience with the Rebbe and the Rebbe asked about me. He said to her, “Have all your guests already left? Has your brother already gone back?”

When she came home, she told me, “The Rebbe wants you to learn in the Chabadyeshiva.”

But I was concerned how I should tell my teachers at Torah Vodaas that I was leaving for the Chabad yeshiva. The Rebbe said, “You could say that you previously learned in a Chabadyeshiva in Montreal, and that you want to learn in a Chabad yeshiva again.” But I said, “I can’t say that. I am leaving because the Rebbe told me to.” And then he said, “Well then, tell them whatever you want, but don’t lie.”

From that point on, I became a chasid – totally connected to the Rebbe.

In 1954, I was part of a group of yeshiva students who went around during the summer months to different cities, disseminating Jewish literature and talking to people. Four of us were driving from Virginia to Maryland when we were in a bad car accident. The car was totaled; one of the group had a broken nose, another a fractured thigh, and I was rendered unconscious and taken to Elkton Hospital. This happened on a Thursday night. Friday morning already there was a telegram for us from the Rebbe with a blessing for a speedy recovery.

That Shabbos, the Rebbe spoke about us at a farbrengen, and he compared healing to the process of repentance, teshuvah. When Jews return to G-d in repentance, they become even better than they were before they transgressed. And then the Rebbe said, “There are a few students who need a complete healing, and I want to bless them that they should be healed to be better than before.”

Shortly thereafter, I recovered my consciousness and my parents took me home to Montreal. I couldn’t move for six weeks but then I got better. When I returned to the yeshiva, I got a message that the Rebbe wanted to see me. I went to his office, and he said, “I just want to ask you how you are.”

This is how the Rebbe looked after his chasidim.

When I was to get married in 1961, the Rebbe told my mother, “I want to participate in this happy occasion.” But by then he wasn’t officiating at weddings anymore, so my mother wanted to know how he could participate. He just said, “Don’t worry, I’ll participate.”

We were told to call the Rebbe when I was going to the chuppah, and in this way he was connected with my wedding in spirit even if he was not physically present.

After I got married I moved to Pittsburgh, but my connection to the Rebbe continued.

In one audience, the Rebbe told me that there are certain people that come to the synagogue to pray in order to say Kaddish for a departed loved one, but they don’t put on tefillin. He said, “If a person says Kaddish but they don’t put on tefillin that day, there’s a whole turmoil with the soul of the departed one.” And he instructed me to spread the word among the caretakers of the synagogues, to tell them about this, so that they should instruct the worshippers.

And I did this. I went around to all the synagogues in the vicinity and spoke with the caretakers. Because the Rebbe cared so much, as his chasid, I had to do my part.