« Photos: Simcha and Chayus at the Empire Bonfire!
Delivery Worker Injured in Collision with Police Car » 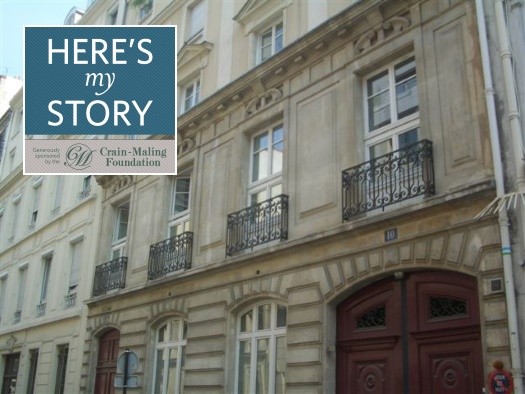 Mrs. Miryam Swerdlov has taught history in Jewish schools for more than 30 years. She directs a camp for American teenagers in Israel and conducts tours of Israel and the Former Soviet Union with a focus on Jewish history. She was interviewed in the My Encounter studio in New York in December of 2014.

In 1937, my uncle Reb Zalman Schneerson was sent to Paris by the Previous Rebbe, Rabbi Yosef Yitzchok Schneersohn, and we followed him there ten years later in 1947. At that time, Paris was full of Jewish refugees, and one of them was Rebbetzin Chana, the Rebbe’s mother who managed to get out of Russia and who stayed with us in our home.

The Rebbe – who was not the Rebbe then, but the son-in-law of the Previous Rebbe – came from America to Paris to escort his mother to New York. At that time I was two years old, and I had a favorite song which I sang while sitting on the Rebbe’s lap.

In 1954, some seven years later, when we came to New York for an audience with him,

the first thing he said to us kids was,

“Children do you remember me? I remember you!” And then he asked me, “Do you still sing the same song?” Can you imagine – after all that time?!

The other thing that stands out in my mind about that audience is my mother asking the Rebbe for a blessing for a sick woman in Paris and getting no response from the Rebbe.

Thinking that perhaps he hadn’t heard her, my mother asked again, and again the Rebbe didn’t answer her. After the audience there was a big discussion about this among the family. My mother said, “Why didn’t he answer?” And my brother said, “That was the answer – no answer is also an answer.” The woman passed away soon after that.

Subsequently, my family moved to Montreal, where I lived until I reached ninth grade. Then I came to New York to attend a Bais Yaakov school. After that I got married and ended up living in New Haven, Connecticut, which was not very far from New York. During those years, I had many encounters with the Rebbe.

Of course, for every audience with the Rebbe, I prepared as best I knew how. But for one particular audience, I remember I took extra special care. To this day, I remember what I wore, and I remember that I put on my make-up very carefully. But when I walked into the Rebbe’s room, the first thing that he said to me was, “Why are you so pale?” Now I had plenty of make-up on, so I shouldn’t have looked pale, but the Rebbe saw right through it. He said, “Maybe there is something wrong with your blood.”

There was the time – in 1967 – when I attended the convention of N’shei Chabad, the Chabad Organization for Women and Girls in Detroit. When the convention ended, I found myself with 20 other ladies waiting to board the plane for home – where my husband and the other ladies’ husbands were anxiously waiting – and hearing that the flight was cancelled. There was a snow storm and nothing was flying.

Of course, we all rushed to a payphone – this was before cell phones, remember – and we called the Chabad Headquarters in New York to ask the Rebbe what to do. The leader of the group, Mrs. Miriam Popack, spoke with the Rebbe’s secretary, Rabbi Binyomin Klein, and told him that we were stuck in Detroit. He put us on hold and a minute later came back on the line, “The

Rebbe doesn’t understand the word ‘stuck.’” Mrs. Popack then tried to explain what “stuck” means – all the while plugging more quarters into the payphone so the line wouldn’t go dead – to which Rabbi Klein replied, “The Rebbe knows what stuck means. The Rebbe says that a Jew is never stuck.”

So we got the message, and we rose to the occasion. We started running around the airport handing out Shabbos candles. And there now are women all over the United States who are lighting Shabbos candles because we got “stuck” in Detroit. As far as the Rebbe was concerned, there is no such thing as “stuck.” Wherever you are, it’s where you are supposed to be.

In 1968, I contracted rubella, a viral infection also known as German measles. I was pregnant at the time and, as a result, my son Avremi was born deaf. This was all very hard for me.

At the time, I was teaching 4th grade at the New Haven Hebrew Day School, and there was one student in my class named Eddie who drove me crazy. As soon as I would walk into class, he’d start throwing things and doing other stuff to irritate me. For some reason, he knew which buttons to push with me, and I allowed him to push them. I used to come home with my hands shaking. And I started to think that this was happening because I left Avremi at home. Maybe I should stop teaching and dedicate my life to this child. I was eaten up with guilt, and I didn’t know what to do.

So I decided to write to the Rebbe to ask his advice. In my letter, I related my issues with Eddie, and I asked if I should stay at home with Avremi.

The answer I received via Rabbi Klein was most strange: “The Rebbe says you should find an outside interest.”

So, I said to Rabbi Klein, “You have the wrong answer. That is not what I asked. My question was the exact opposite.”

I hung up the phone, not knowing what to do with this advice. And then it hit me. The Rebbe understood that if I would stay

home with Avremi full-time, he would become Eddie. The Rebbe understood that I needed something to nurture the “me” inside.

That year I started the N’shei Chabad chapter in New Haven. And that was exactly what I needed – as the Rebbe knew so well.

Because the Rebbe knew me better than I knew myself.

« Photos: Simcha and Chayus at the Empire Bonfire!
Delivery Worker Injured in Collision with Police Car »