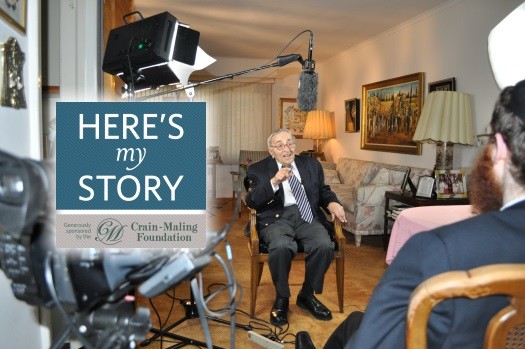 Rabbi Raphael Pelcovitz, an author of books on the Sforno’s commentaries, served Far Rockaway’s Congregation Kneseth Israel for 60 years. He was interviewed in his home JEM,’s My Encounter with the Rebbe project in October of 2010.

At the outset I would like to say that I am not a chasid. My family came from Lithuania, so my background is Litvish and Misnagdish – meaning that my forebearers were opposed to chasidicways. My mother came from Kovno, Lithuania, and my father came from Lomza, Poland, but he studied in the famed Slobodka Yeshiva, which was located before the war in the suburb of Kovno. And that’s where he met my mother.

My father came to the United States during World War One, in 1916, and eventually he brought over my mother and my three older siblings. He was offered a position as a rabbi in Canton, Ohio, and later became a rabbi in Bridgeport, Connecticut, where he stayed until he retired and made Aliyah to Eretz Yisrael.

Growing up in small towns like Canton and Bridgeport was a challenge. Obviously, we were a minority among minorities because very few of the Jewish people living there were Torah observant and, certainly, the vast majority of the people in the community were not Jewish.

I went to public school, populated mostly by Italian and Irish kids, and I had to cope as best as I could with trying to find friends. I managed to have some Jewish friends and to forge an uneasy kind of a friendship with my non-Jewish schoolmates.

In 1938, I enrolled in Yeshiva Torah Vodaas, which I attended for the next six years. I was ordained a rabbi and I started working first as a teacher in a Jewish day school and then as a rabbi – first in Hartford, Connecticut, then in Saratoga Springs, New York, and then in Far Rockaway, New York, where I have been for the past 60 years.

As a rabbi, I became involved with Iggud HaRabbonim, the Rabbinical Alliance of America, which should not be confused with the Rabbinical Council of America. The Iggud HaRabbanim is a much more conservative organization and has taken much more conservative positions on Jewish issues, such as Mi Hu Yehudi – who is a Jew according to Jewish law. This issue was of great importance to the Lubavitcher Rebbe, and it was in this context that I came to meet him in the late 1950s. It proved a very special encounter.Our appointment was for 1 a.m. as I recall. We entered the Rebbe’s office, which was a very large, well appointed room. The Rebbe sat behind a desk and he was very relaxed and very friendly and very personable. As I said, I am not achasid, but I found the experience of meeting him to be very moving and exciting. Still, because of his manner, I felt at ease, and I enjoyed being there.

The Rebbe was an extremely perceptive person, an extremely worldly person, and extremely knowledgeable. He was a Rebbe of course, but he was not isolated from the world; he was not isolated from society; he was very much – to use the vernacular – “with it.” He also had an uncanny ability to put people at ease and to make them feel very comfortable, so the exchange was not strained; there were no awkward silences – on the contrary, conversation flowed.

Though the Rebbe spent his time in his home, in his office, in his yeshiva – he had a grasp and understanding and insight into what was going on in the world, as though he’d spent all his days participating and being actually involved in all of these issues on the public stage. And this impressed me very much.

He was in agreement with Iggud HaRabbanim on the issues we came to discuss, and he encouraged us to stand firm. He also gave us a blessing for our work. But then he asked me a personal question about my father.

My father had served as a rabbi in Bridgeport, a position he held for over 30 years. During that time, Chabad came to Bridgeport and wanted to establish a Jewish day school there. Since my father was the chief rabbi of the city – overseeing five synagogues – he was the major player in town and the Chabad emissaries came to him for help. He gave it gladly. And the Rebbe was very appreciative. My father and the Rebbe had regular contact over the phone, consulting on how to proceed with this school.

Then, after 30 years, my father decided to make Aliyah to Israel. He had made the move about a year before I had this meeting with the Rebbe.

So the Rebbe said to me, “Tell me about your father. Where is he now and what is he doing?”

The Rebbe looked at me and said, “I think it’s a mistake.”

I was amazed. The Rebbe is sitting here in Brooklyn, my father is in Bnei Brak, and he tells me he thinks it’s a bad choice to live there.

I asked why. In reply, he said something that I will never forget.

“Your father was a rabbi all those years in America. He was in Ohio, he was in Connecticut; he was the spiritual leader of communities. But in Bnei Brak, nobody knows him. In Bnei Brak, he’s just another Jew with a beard.”

“Where do you think he should be?” I asked.

He said, “I think he would be better off in a city like Tel Aviv, playing a role in a neighborhood there. In Bnei Brak, no one is going to treat him the way an important rabbi should be treated, because there he is just another Jew with a beard.”

About a year later, I went to visit my father. I didn’t want to tell him directly what the Rebbe had said, but I saw that the Rebbe had been right. My father was unhappy and precisely for the reason that the Rebbeidentified . I realized what a fantastic insight the Rebbe had into the life of an individual whom he had never even met but had only spoken to over the telephone.