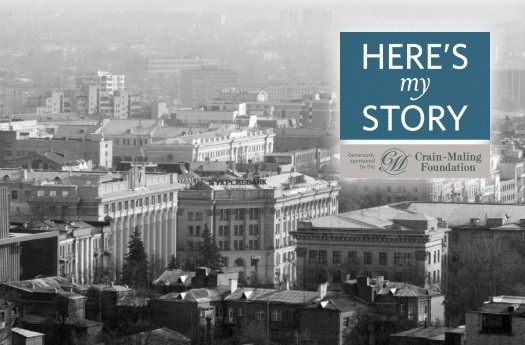 Mrs. Tziporah Edelkopf lives with her family in Kiryat Malachi, Israel. She was interviewed for JEM’s My Encounter with the Rebbe project in New York in October of 2013.

My name is Tziporah Edelkopf. I was born in 1959, in Kharkov, Ukraine, which was then in the Soviet Union. My mother came from a Chabad-Lubavitch home, but my father did not, and we were not connected to Chabad during my childhood. However, we were Torah observant, and we kept all the Torah commandments as best we could.

Because it was so hard to keep kosher, we rarely ate meat. Once a week, on a Sunday, my parents would go to the market and buy one live chicken. We’d then take it to the kosher butcher and have it slaughtered in the proper way.

My father used to bake his own matzah for Passover, and we used to give it out to the few Jews that we knew. Keeping Shabbos was also a big issue. Either I would not go to school on Saturday, or I would go with my hand wrapped in a bandage and tell the teacher I was injured so I wouldn’t have to write and violate Shabbos. Of course, the teachers knew why I was doing this.

In order to immerse in a mikvah, as a Jewish woman must once a month, my mother had to travel to Kiev. In the summer, she could immerse in the local river, but in the winter, when the temperatures were minus 25 degrees Celsius, immersing in the river, which was completely iced-over was impossible. Then, she’d have to take the train to Kiev – which was 850 kilometers from our town – just to use the kosher mikvah.

In Kiev, there was one family that had a mikvah. The water in it was black, because it was never changed, and this water, too, froze over. But when my mother came, they would light up a little kerosene stove to melt the ice. She’d do this once a month on a Sunday, and then she’d run to catch the train home, because she had to be back by Monday morning for work. If she didn’t show up, we all ran the risk of being sent to Siberia.In April of 1971, by some miracle, we got permission to immigrate to Israel. We found ourselves in the community of Nachlat Har Chabad, in Kiryat Melachi near Ashkelon. And slowly we began to fit it.

I went to school and learned Hebrew, while my mother and father were out trying to find jobs. We were very poor. Yet, having made it out of the Soviet Union, we had such a thirst to see the Rebbe – especially my mother, who had come from a Chabad-Lubavitch home. But plane tickets to the United States were so very expensive, and we had so little money.

You have to understand that we had to leave everything behind. We were allowed to take out about the value of $100. Everything else, we lost.

The Israeli government gave us an apartment, but we still had to buy bread and butter. Yet going to see the Rebbe was so important for my parents that somehow they saved up the money. It was not enough for us all. My parents went with my two little brothers, but I had just reached age 12, and an adult ticket was needed for me. There wasn’t enough money for that, so I didn’t get to go. But I sent a letter.

When my parents arrived in Crown Heights and met the Rebbe, he made a big deal out of all they had sacrificed to be Torah observant. They didn’t understand why this was so laudable, because to them it was a way of life. They never thought that they were heroes.

At that very time, a big convention of the Chabad Organization of Women and Girls was going on in Miami, and the Rebbe – who was very touched by their story – requested that my mother go there and speak about what kind of self-sacrifice was involved in being Torah observant in the Soviet Union.

The Rebbe also asked my parents why I had not come and only sent a letter. When they explained that they didn’t have enough money, the Rebbe exclaimed, “I am paying for all your tickets! I don’t understand why you didn’t bring your daughter with you!”

Of course, they had paid for the tickets themselves and had no idea that the Rebbe intended to reimburse them. So they were just astonished. And then the Rebbe said, “When you go back to Israel, I want you to send your daughter here.”

I came during the summer vacation. I was then twelve-and-a-half years old, and I traveled without my parents, accompanied only by a neighbor, to see the Rebbe in New York.

I had a private audience with the Rebbe – me, a little girl – and it was a long audience. I remember the Rebbe’s secretary opening the door six or seven times to usher me out, but each time the Rebbe held up his hand that it was not yet the time.

The Rebbe was so nice to me – I remember him like a loving grandfather. He smiled; he expressed interest; he asked me questions. “How are you doing in Israel? How are the Israeli girls treating you? Are you comfortable there?” I remember he said, “I am sure that back in the Soviet Union you were the best student in your class, because that’s how you survived. If you had not been the best, you wouldn’t be here.”

Then he asked me about my religious studies in great detail. And when I left, he gave me a prayer book as a present.

Three or four days later – when I was about to depart for Israel and I came to pray for the last time at “770” – Rabbi Hodakov, the Rebbe’s secretary, told me that the Rebbe wanted to see me again.

Just then the Rebbe walked out of his office, and he said that he wanted me to go to Camp Emunah, a religious camp for girls, to tell the other children there about what our life was like in the Soviet Union.

I was astonished – I had never been to camp before because the camps back in Ukraine had no kosher food. But I said that my parents were expecting me home, and I couldn’t go without their permission.

The Rebbe then instructed Rabbi Hodakov to call my parents. This took some time because we didn’t have a phone back in Israel, and he had to call a neighbor and wait until my mother could be summoned. All that time, while we were waiting for my mother to come on the line, the Rebbe stood there waiting with us.

My mother gave her permission, and I went to Camp Emunah. The camp counselor told me that I had made a huge impact on the other girls, and she was thrilled. But I didn’t feel like a big success; I was just a little girl doing what she was told. And I did it because the Rebbe asked me to.