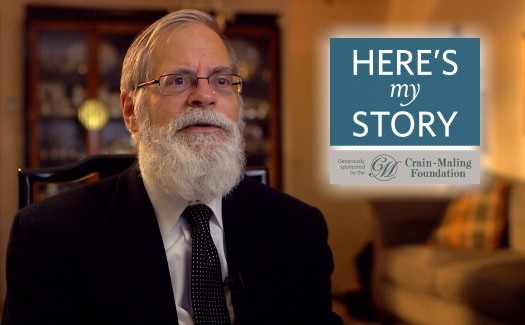 Rabbi Avrum Kowalsky learned in Ner Israel in Baltimore with Rabbi Zalman Ruderman for eleven years and presently gives Torah classes in Jerusalem where he resides. He was interviewed for JEM’s My Encounter with the Rebbe project in his home in March of 2014.

My family’s association with Chabad-Lubavitch goes back to my grandfather Rabbi Moshe Kowalsky, who, when he was a boy growing up in Warsaw, became enamored with the Chabad way. And he decided to run away from home and travel all the way from Poland to Russia, to learn at the Chabad yeshiva in Lubavitch.

His father, that is my great-grandfather, was a fierce Kotzker chasid, and he would have none of it. He went after his son to bring him back.

When my great-grandfather arrived in Lubavitch, he was invited to spend Shabbos with the Rebbe Rashab, the fifth Rebbe of Chabad, and he consented. After that Shabbos – instead of demanding that his son return immediately home to Warsaw – he declared, “I was so impressed by the spirituality I experienced over Shabbos that I consent to have my son stay here.” So my grandfather got to study with Chabad, and he received rabbinic ordination from Chabad, and he became a very big Lubavitcher chasid.

In later years, when he was living in New York, my grandfather had an apartment in the same building as the Rebbe and Rebbetzin Chaya Mushka, and he even purchased a gravesite within four cubits of the gravesite of the Previous Rebbe, which is of course where the Rebbe is now buried as well.

I visited my grandfather often and my earliest memory – from the time I was about eight years old – is the Rosh Hashanah Tashlich ceremony at the Brooklyn Botanical Gardens. The Rebbe would come marching down the street with all of his chasidim following behind him, in formation. It looked almost like a military parade.The Rebbe was very vigorous physically, and he would walk at a very rapid pace, so the chasidim, in order to keep up with him, would be at a trot. It was a remarkable thing to watch, and it made a big impression on me.

On Shavuos, my grandfather would always send a platter of first fruits – bikkurim – to the Rebbe. And he would ask his grandchildren to deliver it to Chabad Headquarters at 770 Eastern Parkway. We would carry the heavy fruit platter into the building and push our way through the tightly packed crowd of chasidim in order to reach the Rebbe. It would sometimes take 15 minutes to do this. Then we would present the bikkurim to the Rebbe who would thank us and put the platter on the table so the chasidim could partake of it.

Another fond memory I have is going with my father, Rabbi Sholom Ber Kowalsky, tofarbrengens at the close of each holiday. Barring illness we would always go. Unfortunately, when my father was in his mid 50s, he became ill with a very serious lung ailment and eventually lost one-third of his lung.  There came a time, in 1966, the doctors wanted him to undergo a risky medical procedure, but my father would not consent to this until he got a blessing from the Rebbe.

I had just gotten my driver’s license, so my mother said to me, “Take the car, drive to 770 and ask the Rebbe for a bracha for your father.”

I drove to Crown Heights, and I got there around 2 in the afternoon, but the Rebbe’s secretary said that it was impossible for me to see the Rebbe now. If I came back at 3 in the morning, he could possibly squeeze me in. But I knew that I couldn’t come back at 3 – there was no way that my mother was going to let me drive in the middle of the night from Queens to Brooklyn. So I could not go home if I wanted to fulfill my father’s request.

On the other hand, if I just sat there and waited 12 hours, my mother would panic. This was in the days before cell phones, and she would have no way of knowing what happened to me. She was sitting in the intensive care unit with my father, where there were no phones, and she would have no idea why I had disappeared. She’d go to the police for sure.

I didn’t know what to do and then I realized that the Rebbe would have to leave his office for the afternoon prayers. And I decided that I would approach the Rebbe then and tell him that I needed to speak with him.

Sure enough, the Rebbe left his office to pray, and as he was returning with his entourage, I walked up to him. Immediately, I heard a lot of angry murmuring from the people around him – the chasidim were very agitated that I was breaking protocol, and that I had the temerity to approach the Rebbe without an invitation. This was not proper respect of the Rebbe.

Some were so furious at this perceived insult to the Rebbe that they even shouted at me. But the Rebbe – who, of course, recognized me – just put his right hand on my shoulder and ushered me into his office.

He closed the door, and he said to me, “Something must really be important for you to approach me like this. Could you tell me what is the problem?”

So I explained my quandary to him. If I went home, I couldn’t come back. If I stayed, my mother would call the police. So I didn’t know what to do, and I just figured that somehow, if I spoke to the Rebbe, he would understand.

He said, “I do understand. You did the right thing. Don’t worry.”

He then inquired about the details of the medical procedure my father was to undergo. And then he said, “Go back and tell your father that he should go ahead with this procedure, and that he shouldn’t have any fear, because he will get well, G-d willing, and he will have a complete recovery.”

I thanked the Rebbe and, as I made for the door, I realized that now I would have to face that crowd again. But the Rebbe anticipated this. He opened the door and walked out in front of me. The chasidim were all gathered there, but he put up his hand, and the crowd split like the Red Sea, opening a path for me to the front door. I bolted for the street and ran as fast I could to my car. I went home and I told my father the good news – that the Rebbe had given his blessing and assurance that he would get well.

And indeed, he did. The operation was a success, and my father lived for quite a number of years after that. In fact, he lived long enough to make aliya to Israel in 1982, and he passed away only seven years ago.