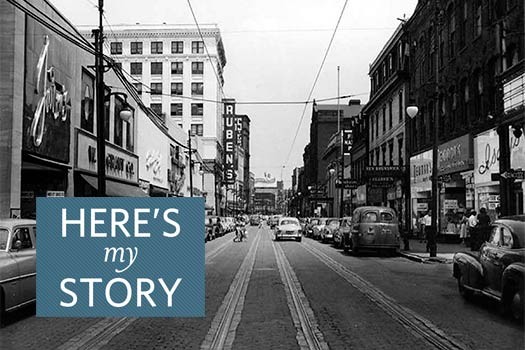 Mrs. Sarah Esther Feigelstock has been a Shlucha in Montreal since 1945 and is a teacher of chasidic thought in Montreal for over 40 years. She was interviewed in her home for JEM’s My Encounter with the Rebbe project in July of 2010.

I was born in a small town – McKeesport, Pennsylvania – in the 1930s, where I was the only Jew in my class at school, the only Jew on the block, even though our family was very religious.

My mother and father were both quite active in the Jewish community. My father taught an early morning class in the Talmud at the nearby synagogue, and afterwards he would go off to work, selling dry goods door to door. He did this because in those years – the 1930s and 1940s – that was the only way of making a living and not having to work on Shabbos.

I would sum up my home life as very vital and very beautiful religiously, but I would have to say that, as a family, we felt very isolated. And I remember my mother crying when she lit Shabbos candles and praying that all her children remain Jewish. I didn’t understand why my mother cried about that, but she was clearly aware that our environment was a breeding ground for assimilation.

In 1941, when I was ten years old, my parents brought home for Shabbos two emissaries of the Lubavitcher Rebbe – that is, the Previous Rebbe, Rabbi Yoseph Yitzchak. From that point onward, our lives changed quite dramatically, as my parents became involved in Jewish outreach.

My father started visiting the Previous Rebbe in New York quite often and he took me along to experience a Chabad farbrengen. I remember that a lot of people were crowded in the room and I couldn’t see a thing. But then Shmuel Isaac Popack – and I will be indebted to him for the rest of my life – saw little me trying to stand on my tippy-toes, and he swung me up so I could catch a glimpse of the Rebbe.At that moment, the Rebbe saw me, and he gave me the broadest, most beautiful smile. And I knew then that the Rebbe cared. after that I went to many more farbrengens – whenever my parents had a chance to take me.

Our family developed a close relationship with the Previous Rebbe – he wrote to us every few months, and he advised my parents how to do outreach in our community and how to conduct ourselves religiously.

As a peddler of dry goods, my father used to collect the money on Friday, which for most people was payday. Because of this, he would come home quite late, very close to the start of Shabbos, which upset my mother. She confided this in the Previous Rebbe, and the next time my father had an audience, the Rebbe told him that he had to have a cut off time, and whenever he reached that time, no matter what, he had to head for home.

It so happened that a tremendous tornado hit Pittsburgh one Friday. My father would have kept on with his collections were it not for the directive of the Rebbe. But as it was, he came home. There was terrible rain and wind, and I remember standing by the window and praying that he would come home in one piece. And he did. Later we heard that the place where he had been was completely wiped out. But he was saved – it was a miracle, precipitated by his listening to the Rebbe.

If there is one thing that I can’t forgive myself for is not taking advantage more of what the Previous Rebbe was offering us – not understanding his greatness. Only later did I study his teachings, such as Likkutei Dibburim, and when I did, I realized that this was my door to chasidicthought.

From the time my husband and I married, we’ve had a daily class, every single day, the whole year, in Likkutei Dibburim and I would say that our house is founded on that. The Previous Rebbe won me over as a chasid and it’s not for nothing that for the last twenty years I’ve been teaching Likkutei Dibburim in the teacher’s seminary where I instruct, chasidic thought.

The Previous Rebbe passed away in January 1950, a few months after our marriage, which he was instrumental in arranging. The news affected me very badly. I just couldn’t deal with it. I couldn’t imagine how the world could go on.

Afterwards, I remember attending a farbrengen presided over by the future Rebbe and him laying down his head on his arm and crying and crying. I’m overcome with emotion just remembering it – when the Rebbe would mention the Previous Rebbe’s name, he would just break down. I can never forget the Rebbe’s sobbing until he regained his composure and went on.

After the Rebbe assumed leadership, my husband and I came to New York for an audience, and of necessity we brought along our son, who was about five months old at the time. Unfortunately, the baby was fussy and not allowing us to converse with the Rebbe.

What did the Rebbe do? He focused on the baby. He presented him with a pencil, and as my son was playing with the pencil, we were able to talk. And I just couldn’t get over that.

Over the years, the Rebbe was very deeply involved in all the details of our everyday lives – he wanted to know how my husband’s yeshiva was doing, how we were managing with household expenses, how my (health was holding up. He would want to know what problems we might be having. One time, he asked me why I looked so pale. He asked in such an unobtrusive way that all my worries would come tumbling out. Every year I would go back for his blessing because it was what kept me going.

One time, I came for an audience with my requests written on a piece of paper. On this particular occasion I was there without my husband and I was more nervous than usual. I knew that the procedure was to hand in my written request to the Rebbe, then wait for him to read it and talk to me. But in my nervousness I forgot to give him the piece of paper which I was clutching in my hand.

The Rebbe spoke with me as if everything was as it should be. He addressed every single thing that I had written down and gave me his blessings. It was only when I went out that I found that paper still clutched in my hand. I couldn’t believe. How had he known? It was as if he had read my mind and responded to my every request. I was stunned.

Today, with the Rebbe no longer with us physically, I take comfort in reading and re-reading his letters – the Igros – which he wrote to so many people all over the world, offering advice and sending blessings. I also visit his resting place quite often. And in this way, I feel that the Rebbe is here with me, watching over me like a father