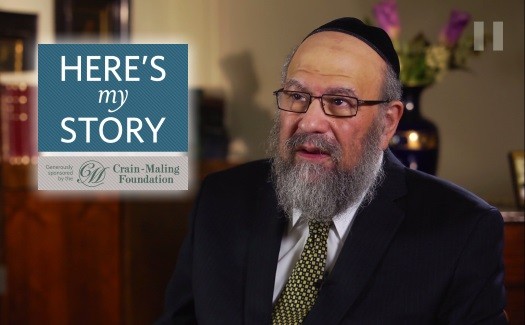 Rabbi Shlomo Besser, an activist dedicated to preserving the Jewish cemeteries of Eastern Europe, succeeded his father as the rabbi of Congregation Bnei Israel Chaim on the Upper West Side of Manhattan. He was interviewed for JEM’s My Encounter with the Rebbe project in his parents’ home in July of 2014.

I was born in Israel, but when I was six years old my parents immigrated to the United States and initially settled in the Crown Heights section of Brooklyn. At this time we were not associated with Chabad, but my father would occasionally pray at 770 Eastern Parkway, the Chabad Headquarters. And my first encounter with the Rebbe happened then – in 1951 – when he first took over the leadership of Lubavitch.

I had come with my father, and I recall that the synagogue was packed. I felt a little lost, and I was looking around for a prayer book, a siddur, but could not find one. Then I saw a siddur perched on the table where the Rebbe sat. The Rebbe motioned for me to sit next to him and pray from his siddur together with him. So I did. The chasidim didn’t like that and they started motioning to me to move away. The Rebbe looked up and said, “Vos vilt ir fun im, es davent zich zeir gut mit im!” Which means, “What do want from him? My prayers are going very well with him!”

I had many more encounters after that, some of which were quite special.

During one audience with the Rebbe in 1973 – after I was married already and had three children – I mentioned to the Rebbe that my oldest daughter would turn five on the 11th of Nissan, which happened also to be the Rebbe’s birthday. And I asked the Rebbe, “Since there is a custom among the chasidim to take on an additional mitzvah or a mitzvah upgrade on each birthday, I’d like to know if there is something I can do in conjunction with my daughter’s birthday?”

The Rebbe smiled and said, “Had you not asked me, I wouldn’t have told you, but since you did ask, I will suggest that your daughter start lighting Shabbos candles.”Now this was a full year before the Rebbe initiated his Shabbos Candle Lighting Campaign to have all girls begin lighting candles so, at this time, it was a strange idea. The Rebbe saw that I was surprised, and he said, “I can tell you this – the additional light that enters the house will bring in more joy.”

When I walked out of the Rebbe’s room, I felt that I was walking on a cloud, because the Rebbe told me something which was totally new; he had given me a new directive. Of course, my five-year-old daughter began to light Shabbos candles, and this custom has carried to the next generation.

On another occasion, the Rebbe really saved my wife from terrible agony. She was in the seventh month of pregnancy and in such painthat she literally could not get out of bed. The baby was pressing on a nerve. Very concerned, I called the Rebbe’s office. That very evening, I received an answer: “Check your tefillin.”

I immediately brought the tefillin to Rabbi Yosef Silverman, the world-renowned scribe in Montreal, to be checked. A few hours later, he called me, “I would like you to come over here.” I said, “Did you find anything wrong?” He answered, “The writing is nice, but these scrolls were not intended for these containers. So the scrolls fell over and, instead of standing vertically, they were in a horizontal position. However, I fixed the problem by supporting them, so now they can stand as they should.”

After I picked up the tefillin, I went home. This was about three or four o’clock in the afternoon. And what do I see, but my wife standing in the kitchen. I was shocked because she had been in such pain she could not get up. I asked her, “When did you start feeling better?” She said, ‘I don’t know, about an hour-and-a-half ago.”

Then I told her the story. We both realized that just at the moment the fallen tefillin had been placed upright, she was able to stand up from her sickbed.

Another story that I would like to tell – this happened around Chanukah time in 1977 – concerns my business. At that time I owned a travel agency in Montreal, and I had an offer to move it to a better location but at considerably higher rent. I didn’t know what to do so, of course, I wrote a letter to the Rebbe.

Absorbed with my concerns, I had forgotten that people had been asked to refrain from writing to the Rebbe at this time – this was two months after his heart attack – and, when I realized that, I kicked myself for sending that letter. The Rebbe had said many times already: “When you have a question, first ask advice of your friends.” Letters to the Rebbe were only for matters of life or death.

In any case, I was glad when I received no answer. I had hoped that the letter never arrived, or if it did, that a secretary had put it away. As it was, I made the decision myself, and I moved my office.

Some months later, come Passover time, I was visiting my parents in New York, and I went to Crown Heights the night after the holiday. The Rebbe was handing out wine from his cup, and I was one of the people who went up to him to receive it. When he handed me the wine, he said, “This is for your new office.”

So, you see, he kept everyone in his mind! It amazed me that he remembered my little request so many months later! I was truly shocked.

On another occasion – in 1988 – my brother Naftali went up to receive the wine from the Rebbe’s cup. This was Shavous time. And when the Rebbe gave it to him, he asked my brother, “What’s new with you?”  Naftali was taken aback. He hadn’t expected the Rebbe to speak to him, and he suddenly felt tongue-tied.

Now, my brother had been married for four years already and he had no children. He had written to the Rebbe asking for a blessing, but at that moment he didn’t have the wherewithal to repeat his request. But the Rebbe said in Yiddish, “Zol zain besser un besser” – which means “it should be better and better,” except that he used our last name Besser and said “besser un besser.”

The Rebbe had said “besser un besser” on the 7th of Sivan, and the baby was born on the 6th of Adar – so exactly nine months later there was one Besser and another Besser – the next generation of Bessers was born.