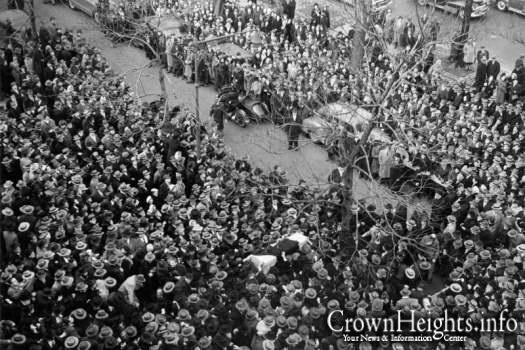 From Days Gone By: Previous Rebbe’s Funeral in the News

In honor of Yud Shvat, the Yahrtzeit of the previous Lubavitcher Rebbe, we present a news clipping from a local paper reporting on the historic Levaya that took place in front of 770, in which the Rayatz is (inaccurately) referred to as the former “chief rabbi of Russia and Poland.”

More than 3,000 mourners tied up traffic for 15 minutes in Eastern Parkway Yesterday at the funeral of world-famous Chief Rabbi Joseph I. Schneersohn, 69, once chief rabbi of Russia and of Poland and for 15 years head of United Lubavitcher Yeshivoth, who died Saturday of a heart attack.

Sad-faced men, women and children began gathering in front of the rabbi’s home at 770 Eastern Parkway around 11 a. m. At 12:30, as the plain pine casket was carried from the home by eight rabbi pallbearers the crowd surged forward to touch it. In the excitement, Hyman Trotter, 71, of 562 Bedford Ave., suffered a heart attack and was taken to Kings County Hospital.

The rabbi’s body was taken to Lubavitcher Yeshivoth, 1352 Bedford Ave., of which he was founder and president, before burial in Montefiore Cemetery, Springfield, Queens.

Rabbi Schneersohn, whose great-grandfather founded the Chabad movement 170 years ago, was spiritual head of it when he came here as a refuge in 1940. He was welcomed at the time by more than 1,000 persons and a large delegation of city officials, He became an American citizen last year in ceremonies at his home, when illness prevented him going to court. In 1920, in Ruasia he was ordered executed. The late Sen. Borah interceded and he was exiled.

As Chief Rabbi, Schneersohn was head of all the Yeshivahs in the world. He leaves a wife and two married daughters.