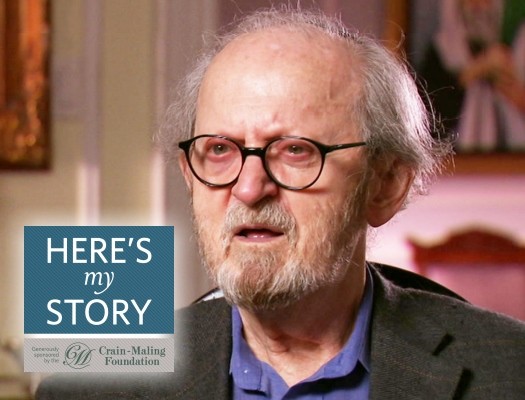 Charles Roth served as the executive director of the National Jewish Post for 29 years and also worked as a broadcaster for ABC News. He was interviewed for JEM’s My Encounter with the Rebbe project in August of 2009.

In the early 1940s, when I was about fifteen or sixteen, my family moved from Coney Island to Crown Heights. We didn’t move to Crown Heights because it was the seat of Chabad-Lubavitch – we were not Lubavitch, so that did not attract us at all. As a matter of fact, there were very few Lubavitchers in Crown Heights at that time, but the Lubavitcher Rebbe – the Previous Rebbe, Rabbi Yosef Yitzchak – lived there, and he had just established his headquarters at 770 Eastern Parkway.

Once we were living in the neighborhood, for one reason or another, my father took a liking to the Lubavitchers, and he began to attend prayer services at 770. At that time, I was enrolled in Yeshiva Torah Vodaas, but when I heard that a yeshiva for my age group was about to open at Lubavitch, I decided that I wanted to enroll.

But my father had misgivings about this. He said, “You’re an American kid, you’re not going to succeed in a chasidic yeshiva. It’s not like the yeshivas you’re used to – it’s a European yeshiva, not an American yeshiva.”

Meanwhile, my father’s minyan in the Lubavitch shul had expanded to include other men who were not chasidim. My father came to know these people because they would all sit down to make a kiddush together after Shabbos prayers. This was not a Lubavitch custom – the Lubavitchers went home, but these men stayed behind.

And that brings me to a story I want to tell about Rabbi Yosef Yitzchak, the Previous Rebbe, and also about the future Rebbe, who was then the Rebbe’s son-in-law. We knew him as Ramash – an acronym for Rabbi Menachem Mendel Schneerson.

In the summer of 1945, the Previous Rebbe was vacationing in Morristown, New Jersey, and my father – because he had a car – was asked to drive some chasidim there. When they arrived, my father stayed in the car waiting for them to complete their business, but the Previous Rebbe asked if he might like to come in.

My father said, “I’m not going to pass up an audience with the Rebbe,” and he went in.

When the Previous Rebbe asked him, “What can I do for you?” my father took that opportunity to voice a complaint. He said, “Please tell your chasidim to stop ostracizing us.”

The Rebbe was shocked. “My chasidim do that?!  How so?”

“Well, after Shabbos prayers we make a kiddush,” my father replied. “But your chasidim don’t participate, they just go home, and that makes us feel like we’re outsiders.”

When he heard that, the Rebbe laughed and he gave my father three dollars. He said, “Tell my chasidim that I gave you money for vodka and they’ll make a kiddush with you.”

Having arranged everything, my father then asked Ramash – the future Rebbe – to please say a few words of Torah at the kiddush. But he refused.  My father didn’t let go. He said, “You must do it. The Rebbe gave us three dollars, and he said this will bring us cooperation from all the chasidim, so you have to cooperate too.”

Finally, Ramash agreed to teach Torah once a month, on Shabbos Mevarchim, the Shabbos before the new month.

The first time he did it, he taught a Mishna of Rabbi Meir. I think he may have done it in honor of my father whose name was Meir. He spoke for two hours without stopping. He cried twice during his talk, though we didn’t understand why.

Some years later, after Ramash became the Rebbe, he asked me, “Why don’t I see you at the Farbrengens anymore?” So I said, “Because I’m more concerned with how the Rebbe is going to respond to my l’chaim than I am with anything else. And I don’t think that is a good reason to go to a Farbrengen.”

I was owning up that, when I did come to the Farbrengens, I didn’t come for the Rebbe’s blessings, but to be able to brag about what he said to me, because he had a clever way of responding to each person.

My admission brought a big smile to his face and he said, “It’s nice that you’re being honest and open, but you should come to the Farbrengens anyway.”

On another occasion – this was in the mid-1950s when I was in my thirties already – he asked me why I hadn’t gotten married yet.

“I haven’t found the right lady yet,” I replied. But he must have sensed that I was being very choosy and passing up many appropriate marriage partners. So he said to me, “Getting married is pretty much like learning how to swim. You don’t learn how to swim by reading a book on swimming – you learn to swim by jumping in the water. And that’s how you should go about getting married. If you want to get married, don’t think about it too much – just find  a lady and do it.”

And I’d just like to say that whenever he gave me advice – even though I, personally, was not observant – he always made me feel that he was concerned about me. He was always caring, and he never admonished me in any way or made demands. He was just very, very warm to me, and I shall never forget it.