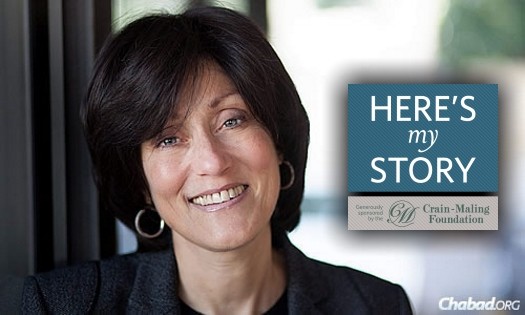 Mrs. Masha Lispkar has served as a Chabad emissary in Johannesburg since 1972. She was interviewed for JEM’s My Encounter with the Rebbe project in July of 2014.

My name is Masha Lipskar. I was born in 1949 in Brooklyn. When I was four, my parents moved to Philadelphia, Pennsylvania, where my father, Rabbi Aaron Popack, took a job – at the behest of the Previous Rebbe – as the director of the Bais Yaakov seminary.

When I was growing up in Philadelphia, after the war, it was a brave new world –where all that Jews really wanted was to be American. When I completed high school, my dream was to go to university and become a journalist. I thought that as a journalist out in the world I could best help spread the message of the Chabad Movement. But my parents felt that this was no occupation for an observant girl and that I should go to Bais Yaakov seminary instead.

My father consulted the Rebbe who suggested that, instead of Bais Yaakov, I should come to Crown Heights and attend Bais Rivkah. And this is what I did.

Bais Rivkah was a sorry sight – the school had no money for electricity and we were freezing; when it rained, the rain came in. I would call my parents crying my eyes out. My father advised me, “The Rebbe told you to go there, so you have to tell the Rebbe about this.” I wrote to the Rebbe and, after the mid-term break, Bais Rivkah reopened in a better location. I realized then how much the Rebbe listened to everyone, how much he cared about individuals and their needs.

I studied in Bais Rivkah for two years, and then my parents asked me to return home. I got a job teaching second grade, and it was a year of tremendous growth and learning, but I was very, very lonely. I spent all my time at home preparing my lessons and going to work, and I couldn’t wait for the summer when I could join my friends at camp.

I had attended Camp Gan Israel in Detroit as a camper for five years, and now I wanted to work there as camp counselor. When I applied in the spring, I heard, “We’re not organizing yet.” But when I tried again a month later, I was told, “Sorry, but we filled all the places.” I was quite heartbroken.

That’s when I decided to appeal to the Rebbe to return to Crown Heights, because I couldn’t imagine another year of loneliness in Philadelphia. I came to 770 and waited in line with all the ladies, clutching my written request. When it was my turn, the Rebbe read what I had written and asked, “But you say here that you’ve had great success as a teacher in Philadelphia. Why would you want to leave?”

“Because I don’t have any friends,” I blurted out. The Rebbe looked at me thoughtfully and said, “You can come back to Crown Heights and teach here in September. But what will you do for the summer?”

When I informed the head of staff that the Rebbe wanted me to come to Gan Israel, I was told again, “There’s no place.” And I remember saying, “Well, it’s the Rebbe’s camp.” And that was that. I was offered a job that nobody wanted to do. You see, the Rebbe had suggested that, at every meal in camp, there should be a teaching of Jewish law – halacha – but during meals it’s hard to keep the campers quiet and paying attention. So they asked me, “Do you want to do this?” I said, “I’ll take it.”

That’s when I learned that the best way to get across a dry teaching is to couch it inside a story.

I came equipped with stories, and I had no problem. When I stood up, they listened, and I was successful. And I feel that, although I didn’t want to be teacher, the Rebbe saw the potential in me, and he found a way to bring it out. He didn’t just issue a command, “You should do this!” He said, “Let me take you there.” This was an incredible kindness on his part. And his guidance has continued to carry me and support me throughout my life. To this day, I draw on it.

The speaking skills that I developed back then helped me enormously later, when my husband and I became the Rebbe’s emissaries in South Africa. Today I actually have a weekly radio show in Johannesburg.

Before we got married, we had an audience with the Rebbe, when we requested his blessings for our life together. I asked my husband to include a request for a blessing “to have a warm home.” He dutifully wrote it down but afterwards he said that he thought it an odd request – how could we not have a warm home?

I guess in the back of my mind was the fear that I didn’t have what it takes to create a warm home. I was a very bookish person – I could develop a teaching curriculum, prepare worksheets, speak to groups. But I wasn’t a hostess. I didn’t know how to welcome guests – this was something that was never developed in me.

When we came before the Rebbe, he gave us many blessings and then, suddenly, he said, “Now about having a warm home…” I perked up. The Rebbe went on, “If you want to have a warm home, see to it that you make it warm for the other, and then it will naturally be warm for you. As it says in Proverbs, ‘For the lamp is a mitzvah, and the Torah is light.’”

It took me a while to process that blessing. But, with time, I began to see this as the Rebbe’s guidance for my interpersonal life, as if the Rebbe was giving me kind fatherly advice, saying in a nutshell: “You are going to have to learn to see the other. You are going to have to learn to see what the other wants and needs in order for you to feel fulfilled – that has to do with your children, your husband, your siblings and your parents, whoever comes into your space. Of course, the same applies to G-d – seeing and understanding what G-d wants from you. To continue your cycle of blessings, seek to make it warm for G-d, and you will feel warm.”

I realize now that this is a teaching with endless layers to it, endless applications, and that the Rebbe gave me and my husband a gift which we could unpack forever.