« Photos: Tefilin at the Taj Mahal
Video: Asara B’Teves with the Rebbe » 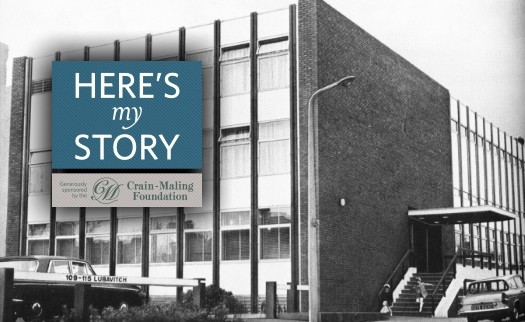 Mrs. Leah Arkush has been a Shlucha in Birmingham, England, since 1974. She was interviewed in JEM’s My Encounter studio in Brooklyn, New York, in April of 2014.

My name is Leah Rivka Arkush. I come from England, where I grew up in Stamford Hill, in a non-religious home just two streets away from Beis Lubavitch – Lubavitch House.

When we first moved to Stamford Hill, I pointed out the Beis Lubavitch to my mother and I said to her, “Look, this is a place where I could go to school.” My mother agreed to check it out, but she didn’t. I had to nudge her a few times until, finally, she found out – and, yes, it was a place that would be good for me, so I started going to school there.

During those years, my father was badly injured in a car crash. The recuperation took a very long time, and while he was in the hospital, my mother struggled very much because we didn’t have any money.

One day, then the headmaster of the Chabad school, Rabbi A. D. Sufrin, got a phone call from the Rebbe’s office inquiring about us. How did the Rebbe know we were in trouble? I have no idea. But when Rabbi Sufrin related that we were not doing so well, he was told, “You must make sure that they have food and whatever they need.”

Even when my father came home from the hospital, he still wasn’t really well enough to go and work at a full-time job. So Lubavitch employed him at the Montefiore Home in Ramsgate, to get it ready for summer camp. He helped in building the Nissan House, and he stayed there until he was better.

It was right around this time that my parents decided it was best for me to change to a different school. When the Rebbe learned that I was leaving, however, he sent a message to Rabbi Sufrin: “She’s got to stay. You’ve got to sort out what has to be, but I want her in that school. I do not want her to leave.”

From then on, the school looked after me. Since my parents’ home was not kosher, the school arranged for me to eat at the Shagalovs and the Sufrins. My mother was not happy about this because I was twelve years old, but she went along with it.

This went on until I graduated elementary school and went to seminary. I was there for three years. Only later did I find out that the Rebbe actually paid my tuition! The checks he sent didn’t come from any Chabad organization – they seemed to be his own personal checks – just his name, and that’s all. .  They didn’t want to cash them, but they were told that they had to.

He was keeping an eye on my education, seeing that I was learning well and was happy. All the time I was always receiving blessings from him not knowing why. I hadn’t asked for anything, yet I would get a message, “The Rebbe sends you regards.” I didn’t understand why – I just thought he was being polite.

When I completed seminary, I was given a teaching position with Lubavitch and, around that time, I was also given the opportunity to come to New York and meet the Rebbe. I travelled with Mrs. Shagalov, but when the time came for the audience, I went in to see the Rebbe alone. He was seated behind a desk piled with stacks of letters, and I was amazed that he immediately plucked my letter from that huge pile. My letter was in the middle of a stack and yet he knew which one was mine.

He said to me, “I’ve read your letter, but you didn’t write all the things that you do.” And he started to list the various activities I took part in – my teaching, and the groups, camps and clubs I was involved with. I had not written to him about that. Then he said, “…There’s a lot of quantity. But not only do you have quantity, you also have quality, because all the teaching that you’re giving the children is quality. That’s good.”

During that audience, the Rebbe gave me advice about my health – I’d had a lot of problems with my hearing, so that I’m completely deaf in one ear – and he inquired after my parents and how things were at home.

After that, I went out and Mrs. Shagalov went in. She told me later that he also asked her about my parents – if they were being good to me, and let me go on the path of Judaism. And Mrs. Shagalov assured him that all was fine.

A strange thing happened when Mrs. Shagalov was with the Rebbe. She had written out her issues and requests and had handed this note to the Rebbe. And the Rebbe responded to her questions one by one.

Only when she came out of his office, did she realize that she still had with her the note that she had written to the Rebbe. She had not handed it in at all. What she had handed in was her shopping list.

She was just mortified by what she had done. But she was also amazed that, nevertheless, the Rebbe knew all her issues and requests and had responded as if she had handed in the correct piece of paper.

When I returned to England, people began to press me to start dating for marriage. But I felt I was not ready yet. Still, a match was proposed, and I and the boy each wrote in to the Rebbe to ask if he approved. The Rebbe’s secretary, Rabbi Leibel Groner, called with the reply – the boy got an answer “yes,” but I got an answer “no.” The people involved felt I must have misunderstood and told me to phone New York again to clarify the issue.

When I called and explained the problem to Rabbi Groner, he said, “Hold on a moment.” Then another man’s voice came on the line and he said, “To the boy I said ‘yes,’ to indicate that your character is acceptable and that he should look for someone similar. But to you I said ‘no’ because he is not for you.”

And then I said, “Who am I talking to?” He replied, “Rabbi Schneerson.”

I said, “Do you mean the Rebbe?” After a few second pause, which felt like forever, he said, “Yes, the Rebbe.” It took me a while to absorb that.

Then he said: “Another thing I want to tell you is that you shouldn’t worry about dating yet. Just think about it for now, and G-d willing, you will meet the right person at the right time, and you will get married. But for now, don’t worry about it.” I said, thank you, and that was it.

At the time I didn’t make a big deal of what had happened. But I realize now that I was very privileged to have had the Rebbe’s personal attention. I was a poor girl from a non-religious family, and he made sure that my life followed the right path. He personally made sure. And I shall forever be grateful for his kindness and his care.

« Photos: Tefilin at the Taj Mahal
Video: Asara B’Teves with the Rebbe »