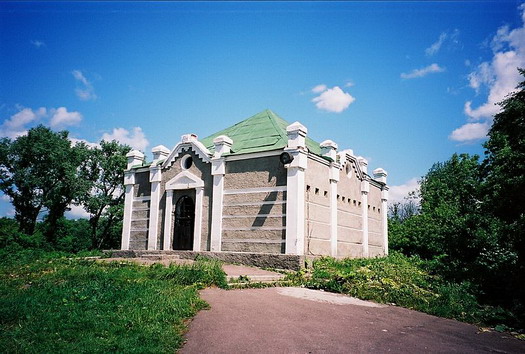 The gravesite of Reb Levi Yitzchok in Berdichev, Ukraine.

Story: Saved By His Faith

On the occasion of Reb Levi Yitzchok of Berditchov’s yahrzeit on the 25th of Tishrei, we present the following amazing personal story as related by a survivor of the holocaust, written by Rabbi Sholom Dovber Avtzon:

Shortly after the German beasts entered my city of Krasna, they ordered me and a many other strong men to go to the outskirts of the town. Obviously we were apprehensive of what this meant, but we hoped for the best. However, our hopes were diminished as we were ordered to begin digging a large pit, and from rumors that we had heard we understood we were digging our own grave.

I was in the prime of my life and desperately wanted to survive, but there were soldiers with machine guns all around us and any one who stopped digging for more than a minute was shot. Escape seemed impossible.

As tears were running down my cheeks, I suddenly recalled a story that my father told me that happened with his father.

As with many successful people, one time he was in an extremely precarious situation, that potentially could be disastrous and can completely wipe him out. He would be ruined forever.

He was a chossid of the great tzaddik, the Tchorkover Rov, (who was the oldest son of the Heilike Ruzhiner), so despite the lengthy trip, he immediately set out to ask the Rebbe for a brocha.

Arriving Friday morning he anticipated that the Rebbe will hold “tisch” on Friday night, and there he will ask for a brocha. However, he was horrified to hear that the Rebbe wasn’t feeling good and there will be no “tisch’. The Rebbe will be eating in the privacy of his house, with his family and no one but no one is to come.

As every chossid, he was saddened that the Rebbe was not feeling well and gave tzedokah for the Rebbe’s well-being, but he was also devastated that this meant that he can’t ask the Rebbe for a brocha.

However, a chossid doesn’t wallow in sadness, his and his family’s future was dependant upon the Rebbe’s brocha, so he has to figure out a way to enter be by the Rebbe’s “tisch”. The other chassidim might chastise him for his chutzpah but he has no choice; enter he must.

So after he went to the mikva early Friday afternoon and put on his Shabbos clothing, he went to the Rebbe’s house. Seeing the hustle bustle, he made believe that he was delivering something and seeing that no one was watching, he slipped into the dining room and hid under the table. He would wait until the Rebbe entered and then at the opportune time, he would ask the Rebbe for a brocha. The Rebbe, with his ruach hakodesh, will understand his actions and won’t be upset.

After some time, people came into the room to set the table and the Rebbetzin then lit her Shabbos candles and said a tefillah. Every time some one moved in the room he was petrified that he would be noticed and chased out, but Boruch Hashem everyone was busy doing their own thing that nobody noticed him.

The minutes went by so slowly, his heart was pounding, his mind was wondering was he doing the right thing, invading into the Rebbe’s private house. His needs are important, indeed he his desperate, but still is it proper to do what he was doing? So many questions, so many fears and the time is stretching on for what felt like hours.

Finally he hears footsteps and the moving of the chairs. Evidently the seudah is about to begin. So now his question is when should he pop out from under the table?

He hears the Rebbe singing Sholom Aleichem, how sweet it is but his mind is in turmoil. Should he ask immediately after Kiddush or should he wait until the end of the meal and hopefully no one’s feet will feel him.  Oy, he is in such a quandary.

He hears the wine being poured for Kiddush and then to his amazement instead of hearing the words Yom Hashishi… , he hears the Tchorkover speaking. The Rebbe said, “We were taught that when a person is in a terrible predicament he should say ‘Levi Yitzchok ben Sarah Sasha help (raitiveh)” and he would be helped.

After saying this the Rebbe then began saying Kiddush.

My grandfather understood that these words were being spoken to him and immediately after the Rebbe concluded Kiddush, he came out from under the table, and sheepishly said gut Shabbos and then thanked the Rebbe for the brocha and yeshuah (salvation).

When he came home the situation already cleared up and everything remained good.

He then told all of his children, my father included about this wonderful segulah, reminding them to pass it down to their children; that whenever they are in a terrible situation they should rely on this segulah.

Remembering this story and without realizing it, I suddenly shouted from the depths of my heart Levi Yitzchok ben Sarah Sasha raitiveh.

One of the guards came rushing over to me and demanded to know what I just said and to whom I was talking?

I innocently replied that I cried out that I want to go home to my family.

The guard gave me a sinister smile and said, “Your request is granted. You have thirty seconds to run.”

I understood that he meant that he was going to shoot at me, but the chance of surviving as slim as it was better than standing in front of this tremendous pit that was destined to become the final burial place of hundreds if not thousands of my brothers and sisters.

So I began to run and luckily there was a river some thirty feet away so I ran towards the river and dived into it. As soon as I dived, I heard a bullet swishing passed me. I was a good swimmer, but never did I swim under water for such a long time and in such a zig zag way. Bullets landed on either side of me, but in the zechus of the great tzaddik Reb Levi Yitzchok of Berditchov, I wasn’t touched. When I finally came out of the river, I hid in the forest and then through many miracles of Hashem I survived the war.