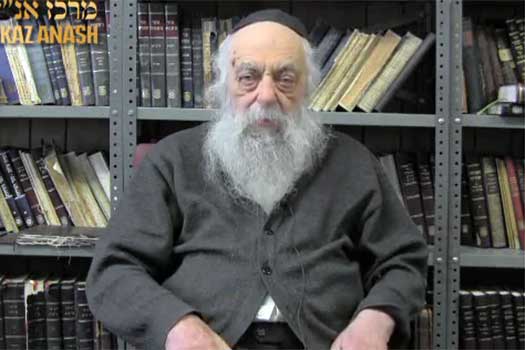 Due to the overwhelming response and demand from the community, Reb Yoel Kahn agreed to present a weekly webcast on topics that are timely and relevant. This week’s topic is titled ‘Preparing for Matan Torah‘.

Reb Yoel Kahn, known to his thousands of students as “Reb Yoel,” serves as the head mashpia at the Central Tomchei Temimim Yeshivah in 770. For over forty years he served as the chief ‘chozer’ (transcriber) of all the Rebbe’s sichos and ma’amorim. He is also the editor-in-chief of Sefer HoErchim Chabad, an encyclopedia of Chabad Chassidus.

In response to the growing thirst of Anash for Chassidus guidance in day-to-day life, Reb Yoel has agreed to the request of Merkaz Anash to begin a series of short video talks on Yomei d’Pagra and special topics.

In honor of the month of Sivan which we’re ushering in this Shabbos, our focus here will be on Shavuos. There’s a famous Midrash to the effect that the Jews slept the night preceding Matan Torah; it states: “The sleep of Atzeres (Shavuos) is sweet, the night is short, and the insects didn’t bite.” It further reports that when Hashem arrived in the morning for the giving of the Torah, He was dismayed, and proceeded to wake them. This is one of the reasons for the custom of remaining awake and learning Shavuos night, known as “tikun leil Shavuos,” since we’re rectifying this very night they spent sleeping.

This story, however, seems quite odd. Considering that sefirah today is modeled after the run-up toMatan Torah then, when, upon learning once leaving Egypt that they were to receive the Torah in fifty days, the Jews eagerly tallied the elapsing days, establishing the template of sefirah, the fact that the countdown culminated in a night of sleep seems peculiar.

Additionally, they had radically refined themselves as the giving of the Torah approached. The passukinstructs us to count fifty days, yet we only count 49, and chassidus explains that while there are “fifty gates of binah,” no one, including Moshe, can comprehend more than 49, and so we advance daily from gate to gate until all 49 are completed, when our achievements are crowned by receiving the fiftieth from Heaven. This is all in reference to contemporary sefirah, we can only imagine the original! And so between their lofty level and intense anticipation, how did they end up asleep?

We must therefore conclude that the sleep was intended as a form of preparation for the Torah. Sleep is a process by which the soul partially departs from the body; it’s said to be a sixtieth of death, and that’s intended in a good way. Our souls are ordinarily confined within our bodies, no matter how refined those are; even the souls of tzaddikim gemurim are restricted by their bodies while vested there. But “when we sleep, our soul rises to Heaven and draws life.” There are numerous tales of sleeping tzadikim who absorbed Torah that would’ve otherwise demanded effort, because the soul is only capable of maximizing its potential once separated from the body.

And so the Jews reckoned that the giving of the Torah, the fiftieth level, was so sublime and beyond their reach, that the best preparation would be to sleep and enable the soul to be unfettered by the physical body, and thereby be ideally positioned for the experience of Matan Torah. Thus their sleep was spiritually “sweet,” and the night, representing darkness and concealment, was “short,” since by the time the last night of sefirah arrived the only darkness left was what was inherent to their bodies. This exalted level of sleep explains why they remained unbitten by insects in defiance of nature. Had their sleep simply been a straightforward case of apathy and carelessness, then there’d be no basis for the insects miraculously not biting them, but this was a noble, “sweet” sleep, to the extent that it affected the creatures in their vicinity.

However, no matter how much we justify their decision, Hashem ultimately was unhappy about their act and we repair it until this day. The Rebbe explains that one of Matan Torah’s accomplishments was the phenomenon of physical mitzvos. The avos who “observed the entire Torah” did so in a spiritual sense. Yaakov’s sticks which, according to the Zohar, were the equivalent of tefillin channeled the spiritual force of the mitzvah, but the sticks themselves did not become holy. Today, once the tefillinare written properly, they become sacred articles, which is something Yaakov could never produce.

The fact that a physical article like tefillin can acquire holiness and go on to affect our hand, was made possible by Hashem’s descent during Matan Torah; instead of being lifted off to Heaven, we have been granted the Torah down here. Yaakov’s efforts would be worthless today, since gashmiyus is now crucial, and what we can achieve overshadows anything he accomplished. This is why the Jews shouldn’t have prepared by sleeping and escaping the world, since staying up and learning would have been a more appropriate choice for the occasion, and that is why Hashem was displeased then.

We therefore engage every year in “tikun,” rectifying the night of Shavuos; we don’t depart this world and opt to learn higher, deeper things, we don’t forget this world in favor of “sweet sleep” and a “short night,” like ‘a tzaddik in his coat,’ who doesn’t care as long as he’s warm. Hashem descended duringMatan Torah, and likewise we must engage other Jews and empower them to observe Torah andmitzvos. Even if we believe ourselves to be unworthy, our humility is misplaced, we must take the little that we know (and deep down we’re convinced we know a lot), and share it with others. We shouldn’t leave our bodies; we must receive the Torah in them.