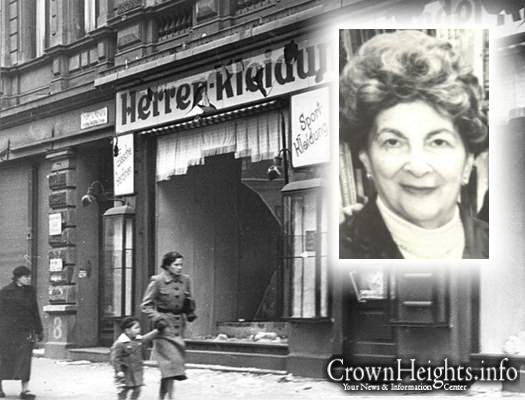 To commemorate the coming 82nd anniversary of Kristallnacht (November 9,1938), we present to our readers a first-person account of Kristallnacht, written by Mrs. Hanna Tennenhaus, OBM. This account was published in the Canadian Jewish News in November, 1998:

That fateful night, Nov. 9, 1938, I studied late. After finishing my homework, I took a piece of paper from a notebook, wrote Ich hasse Hitler (I hate Hitler), then quickly burned it in the dying embers remaining in the red tiled stove and went to bed.

At 2 a.m. there was a great commotion in the street. “Juden raus, Juden raus” (Jews out, Jews out) went the awful shouts. Our bell rang incessantly. My mother, in a long white nightgown, went from room to room in great agitation, while my father prayed silently.

Finally, I opened the door to our apartment. The front door had already been opened by the deputy mayor of our town, who lived on the second floor and was obviously aware of all the horrors to follow.

In front of me stood three machine- gun toting SA men, who told us to get dressed quickly and come with them. I was not quite 15, my anger was greater than my fear, and I told those thugs, “You’ll have to wait while I brush my teeth.”

They obeyed, dumfounded by my defiance, which could have cost me my life.

We crossed the park, small but lovely, where I had spent many happy hours playing or reading, and we were led to a large square where the whole Jewish community was being herded together.

Mrs. Einstein, our paralyzed neighbor in her 80s, was dragged there, suffering shock and numerous bruises as a consequence. The square was surrounded by armed Nazis. Someone asked to go to the bathroom and was scornfully told: “Jews don’t need that!”

Men, women and children were ordered to stand apart. Not wanting to leave my trembling mother. I disobeyed. Our usually awe-inspiring principal and physics teacher arrived in pyjamas with his family, including twin baby girls in a carriage.

The November night was exceptionally cold. We were standing there shivering and dazed, in shock and fear. Suddenly, the sky turned pink. The synagogues, not far away, were burning, together with the community centre, the library and and the mikvah. Some people were screaming, “They are going to burn us alive!”

Around 7 a.m. they led us through the streets to a hall once donated by a Jewish philanthropist. We were jeered by emerging townspeople. Then the women and children were sent home, the men incarcerated in the hall. Some beatings and sadism took place, but none of the fathers ever spoke about it.

A few hours after the release of the women and children, a neighbor came to our apartment asking me to accompany her to the hall to give her imprisoned husband his heart medicine. When we arrived there, an armed Nazi guard sneeringly told the poor lady: “Your husband won’t need his pills. We are going to burn you all, together with your swinish Torah scrolls.”

Soon after we arrived home, the bell rang once again: more armed Brown Shirts looking for men. I trembled for two hours. Later in the day, news spread that we could bring food to our captive men. I hardboiled two eggs, added some bread and set out once more into the hostile streets.

A solitary figure was walking towards me – it was my father, who was the only man released. The others would be sent to the Dachau concentration camp.

To this day I remember the incredible joy I felt, comparable only to my overflowing gratitude when my brother Joseph came home from Dachau, eight long weeks later.

Meanwhile I had witnessed the disintegration of my home and school life, the premature end to my childhood and the decimation of my ancient community.

I was sent to England with the Kindertransport; my brother and sister also escaped to England. Sadly, my parents with 900 others from our community (almost half) perished in concentration camps. May their martyrdom never be forgotten.