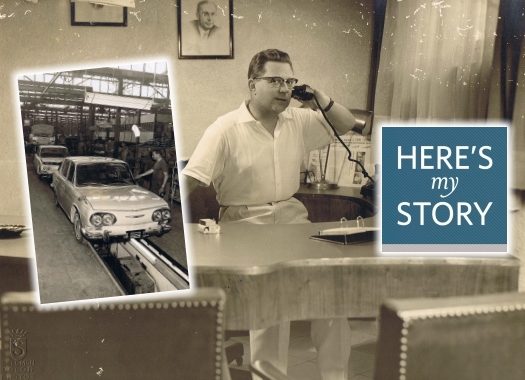 Here’s My Story: Turning the Wheels

With the founding of the State of Israel in 1948, the Henry Ford Motor Company realized that the new state would need a huge number of vehicles for the military and the government, and it announced plans to build a car assembly plant in Israel.

This made news all around the world. The Jewish State was just founded, and the Henry Ford Motor Company would be the first to build a factory there!

Our joy didn’t last long. As soon as the Arabs heard about Ford’s plans, they announced that if Ford didn’t back down, they’d boycott it by putting the company on the Arab League’s blacklist.

So, of course, Ford pulled out.

For the Israeli government it was a moment of crisis. With Ford capitulating to the Arabs, who would invest in Israel?

While the government was searching for alternatives, out of the blue, my friend, Lord Israel Ziev of London, called me up and told me, “There’s a man you must talk to. His name is Hickman Price. He is with the Kaiser-Frazer Export Corporation. His company built an automobile plant in Holland, and it was a great success. Now they want to build one in Greece. I suggested to him that he should meet with you first.”

The arrangements were made, and we met. And from the very first moment, we knew we were going to do business. But this project required $2.5 million. That would be equivalent to $250 million today, perhaps $300 million – so a lot of money.

I asked Kaiser-Frazer to invest half a million, and I would form a group that would invest two million. I thought I’d have no trouble putting together such a group. There was no shortage of potential candidates!

But when the lawyers got down to drafting the contracts, where was the money? Nowhere to be seen!

The time came to sign the contracts, but I didn’t have the courage to do it…I couldn’t sleep … It was then that I recalled an incident involving my late father. He couldn’t decide whether to move his family to Israel, so he went to the Previous Lubavitcher Rebbe for advice. And here I was in New York. So, I said to myself: I can go ask the Rebbe right now!