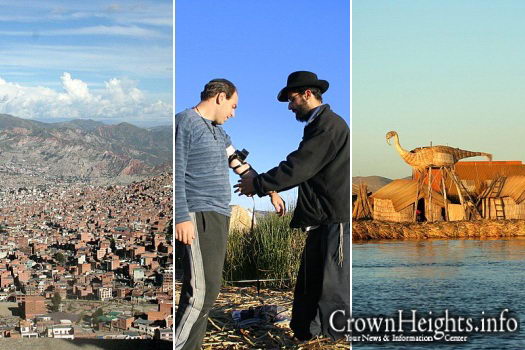 When we think of traveling on vacation to far distances in today’s day and age, the mere thought of an uncomfortable journey almost seems unfathomable. We are used to the highest level of service and, thanks to technology, the world at our fingertips. From kosher mountaintop resorts to kosher cruises in the Mediterranean, the discerning frum traveler can experience luxurious vacations. But for those who would rather get away from it all to hike and climb on foot through uncommercialized trails in South America, backpacking is the adventure of choice. Faced with a daunting trek through remote wilderness, how does a frum backpacker keep kosher in the South American wilderness?

Deep in the heart of Peru, during a tumultuous and invigorating week long trek up to Machu Picchu, a group of frum backpackers stop to set up camp for the night. The weary travelers have been removed from the world outside of their camp for days. They have lived without electronics, running water or ‘normal’ food for almost an entire week. Having just traveled for days on end, these weary backpackers are ready for a nice, warm kosher meal. You may ask: How can a group of amateur travelers prepare a hearty, healthy kosher meal to energize them during their journey? Their belongings, strapped to their backs, some weighing over 40 pounds, consist of tallis and tefillin and very few articles of clothing, in order to make room for the food they’ve brought along: filtered water, instant noodles, dried salami, eggs, avocados, apples, bananas, among other locally grown fruits or vegetables. A gas can, a small pot or two and a couple of matches, and within twenty minutes, dinner is served.

Meanwhile, over in Costa Rica, a small group of travelers have just returned to their hostel following a day of touring. Their purchases of the day include a whole red snapper and some locally grown vegetables. They cover the food in tin foil and stick it over an open flame, and within a mere matter of minutes, they have a delicious kosher meal ready. Other food in their possession include cans of tuna, rice cakes and beans, as well as American products purchased in local markets near their hostel. They have enough food to last them four more days. The real challenge comes if they run out of food. Many backpackers survive mainly on local fruits and vegetables, while considering other food such as carbohydrates and protein as a delicacy. Though it is not ideal to live solely on fruits and vegetables while traveling, in such remote locations, sometimes there is no choice. For frum backpackers who find themselves in bigger, well populated cities, many local markets carry American products such as chips, rice, and beans. However, these particular travelers are quite lucky when it comes to food. As they head south towards San Jose for Shabbos, they come across several kosher markets and even a deli, where they purchase kosher food for the rest of their journey

A trip for the adventurous type, a backpacking escapade through South America offers surprises and fascination for one and all. For backpackers who keep kosher, the surprises and delights make the journey all the more exciting. Accessibility to kosher food in these remote locations can be sparse, though it has become more attainable in recent years. “My biggest recommendation,” said Chani Chein, daughter of Rabbi Chein, Chabad Shliach in Buenos Aires, “is for tourists to buy a Kosher Map before they arrive in South America. That way, they’ll be able to plan their meals accordingly.” Buenos Aires is highly populated with Jews. Certain areas have kosher supermarkets, pizza and sushi restaurants, and two kosher hotels.

A group of frum backpackers backpacked to Machu Picchu last winter, an off season for the Chabad shluchim in that area. “We had salami hanging in our apartment for two weeks before the trip,” a woman explained. “I’m a vegetarian, but the salami was my husband’s main source of protein during the trip. I ate eggs mostly.” They carried a small pot, filtered water and matches with them, so that they could prepare food whenever they stopped for a break or for the night. When asked what they did for Shabbos meals, she answered with a hint of laughter in her voice: “Well, the shluchim from that area are only around during tourist season, and we were there in January. The shluchim from Lima, Rabbi and Rebbeztin Blumenfeld, actually shipped a container full of Shabbos food for us Erev Shabbos. We called them on Thursday night, and on Friday afternoon we went to pick up a container full of food from the airport for Shabbos. We were very grateful.” Their later arrival in Lima greeted them with more options than they had seen anywhere else throughout their travels. The Chabad shluchim have a restaurant working out of their house, as well as a small kosher supermarket where you can buy specialty items that are flown in from Israel and the United States.

A second group of young, frum backpacking connoisseurs, who have collectively backpacked in over sixty countries, had other words of wisdom when asked how they stayed well fed during their epic journeys. They ventured away from highly populated areas and focused instead on the rural, unknown areas where kosher resources were sparse.

“One of the biggest mistakes people make is assuming that products that are kosher in the United States are automatically kosher in South America,” explained the leader in the group, one of the few who, on his own, has backpacked through more than fifty countries. “Food is processed differently in say, Peru or Venezuela than they are in the US. Examples would include cans of tuna, even prepared fruits and vegetables. Keeping kosher while packing isn’t difficult, you just have to be aware of what you buy and where you buy it.

On one occasion, while one group member was traveling in Peru, he spent time in the Chabad House in Cusco. It was there that he learned how to milk a cow and pasteurize the milk. “There’s an art to buying milk there,” he explained. “We could walk down into the village, and look for the healthiest looking cows, because they tend to be very scrawny in those areas. We would pay the cow owners for the milk and either watch them milk the cows, or we would milk them ourselves. We used the Chabad House kitchen to pasteurize the milk so that it would be safe to use. The milk was too thick to be used in coffee, and the milk had a tendency to spoil within a few hours, so we usually used the milk in ice cream or milkshakes.”

Frum backpackers of today experience firsthand what it means to connect with Hashem in strange and remote locations like the Chassidim of old, who used the stillness and beauty of nature to connect to Hashem on different levels. Their most important pieces of advice: “Embrace the unknown! The best things in life happen outside of your comfort zone… And the single most important item to have with you throughout your trip is not food, its baby wipes.”

Reprinted with permission from the OK Kosher Spirit Magazine.