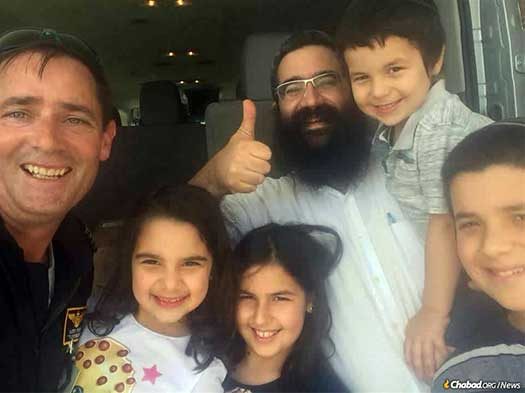 Rabbi Moshe Lieblich and children with the helicopter pilot who delivered much-needed supplies to Wilmington, N.C., just before Yom Kippur.

“We were a bedraggled group,” said Fred Myers, a longtime congregant of Chabad of Wilmington, N.C. “But as the day went on, our energy grew.”

Myers is one of the few members of the city’s Jewish community who stayed behind and weathered the torrential rain and powerful winds of Hurricane Florence. He describes a community reeling after bearing the brunt of the storm, yet optimistic, energetic and grateful they had a place to pray on Yom Kippur.

“As we were praying, we heard the trucks outside working to restore power,” he said. “And inside the synagogue, it was like the electricity was going back on for us.”

While Yom Kippur attendance was sparser than usual, with many congregants having evacuated, those who remained gathered in the home of Rabbi Moshe and Chana Lieblich, co-directors of Chabad of Wilmington, for a chance to reflect, energize and move forwards.

“Many congregants spoke about their experiences,” said Chana Liebich. “One person expressed gratitude that we’re all alive and able to come together. Another emphasized how the storm brought neighbors and friends together. A third said that the storm reminded her of G‑d’s power.”

While many left in advance of the storm, the Lieblichs stayed behind to be there for the community, knowing that if they evacuated, they likely would not have been able to make it back in time for Yom Kippur. With their home located on high ground and in no danger of flooding, it is serving as a gathering point for many community members. “We’ve already invited people for Sukkot,” says Chana, “although we’re not sure what food we will have to serve them.”

Roads aren’t expected to reopen until this weekend at the earliest, and shortages mean that people are waiting 30 to 40 minutes in line to enter supermarkets with largely empty shelves. On Tuesday, just a few hours before Yom Kippur began, Chabad of Charlotte airlifted 150 pounds of kosher food to Wilmington aboard a helicopter. Rabbi Lieblich met the helicopter and within hours, he had distributed dozens of ready-to-eat kosher meals, as well as challahs and honey cakes to locals Jews, many of whom had no power and little food.

For Sukkot, the rabbi hopes to be able to make the four-hour roundtrip drive to Raleigh to buy fresh produce to augment their supplies of frozen food and dry goods. One thing that is in no shortage is sechach—the branches used to cover the sukkah, as the city is strewn with fallen trees and branches.

“Compared to what we’ve gone through,” said Myers, “putting a sukkah up will be easy.”