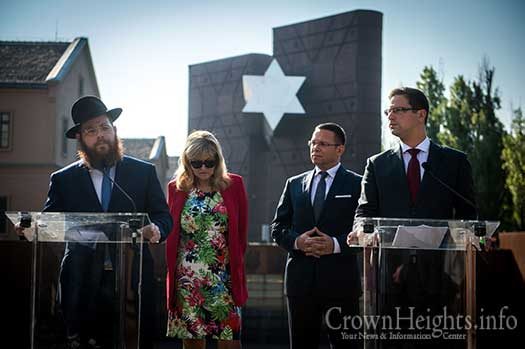 Announcing the transfer of the museum ownership at a joint press conference with Minister heading the Prime Minister’s Office and Rabbi Koves. Photo: Gergely Botar/Kormany

The Hungarian government announced last week that the ownership and management of the new Holocaust museum, scheduled to open in Budapest next year, will be transferred to EMIH – Hungarian Jewish Federation in Hungary, affiliated with Chabad. The decision aims to resolve a years-long dispute between the Hungarian government and Mazsihisz, the Federation of Jewish communities in Hungary, associated with the ‘Neolog’ community. (the Hungarian equivalent of Reform Judaism)

Mazsihisz had opposed the appointment of a historian responsible for the content displayed in the museum. Rabbi Shlomo Koves, the chief rabbi of the EMIH – Hungarian Jewish Federation and a local Chabad Shaliach, noted that “transferring ownership to the Jewish community is intended to end the dispute by delegating responsibility for the content in the museum, as well as how it is displayed. This is very good news and we commend it.”

The government decision on the matter, preceding an official statement, states: “The government agrees to transfer the ownership of the House of Fates to the United Hungarian Jewish Congregation – Statusquo Ante (EMIH–which stands for Egységes Magyarországi Izraelita Hitközség,) and to its owner, EMIH, or to a museum institution established by the owner of EMIH as its appointed operator, as being the operator and manager of the House of Fates.”

The construction of the main part of the new museum was completed three years ago, but the finishing touches were delayed due to the dispute with the local Mazsihisz community. Its members have been, over the past few years, on a collision course with Hungarian Prime Minister Viktor Orban, due to the left-leaning bent of the community, who are opposed to Orban’s right-wing views. The community accused Orban of being soft on anti-Semitism – but the Israeli government of Prime Minister Benjamin Netanyahu has decided to strengthen ties with the Orban administration.

To finish the project, the Hungarian government announced an additional investment of 6.1 million euros, in addition to the 22 million euros already invested in the site. The government also announced plans to fund the entire cost of operating the new museum, including additional exhibitions to be curated by the community, as well as an educational center and research facilities.

In a joint press conference between the Minister heading the Prime Minister’s Office, Gergely Gulyas, and the Chief Rabbi of EMIH – Hungarian Jewish Federation, Rabbi Shlomo Koves, Gulyas said, “The House of Fates will open its gates next year, on the 75th anniversary of the Holocaust. “The government decision also includes the fact that the owner of the Holocaust museum will be the Jewish Community, something which is unique in Europe. (…) The fact that in Hungary the organized, mass transportation of Jews to death camps only occurred following the German occupation on 19 March 1944 does not mask the responsibility and guilt with relation to the fact that following this the state did not protect its citizens. There is no collective guilt, but there is the state responsibility.”

Rabbi Koves said in the press conference, “the most important mission regarding the memory of the Holocaust is not only to pass on historical knowledge, but also to develop a personal and emotional connection with the story. The Holocaust is not only an internal Jewish issue but an important issue for all of society; it affects human morality and the deepest layers of the human soul. We also must speak of the victims of the Holocaust: who they were, what is the heritage and culture they bequeathed to Hungary and the world, and who carries their legacy in the Jewish communities in Hungary and Israel.”