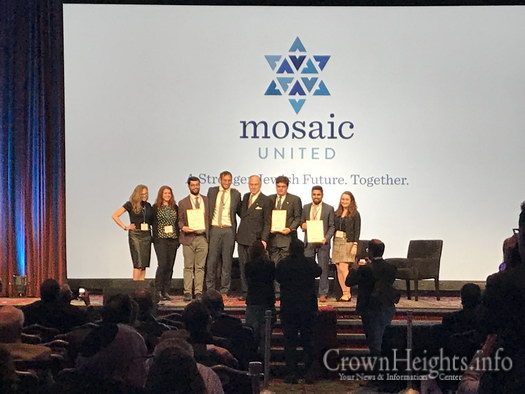 Gabriel Kaufmann, a Jewish collage student who serves as President of Student Chabad at the University of Pittsburgh, directed by Rabbi Shmuel and Sara Weinstein, was honored for his commitment to Jewish life and Israel during the 7th Annual Jerusalem Post Conference in New York on April 30.

The award was presented by Rabbi Benji Levy, Chief Executive Officer of Mosaic United, who paid tribute to Kaufmann’s kindness and bravery, praising him for making Jewish students feel at home on campus by “inviting them to Shabbat dinner or Pizza and Parsha.” He also highlighted how Kaufmann “once encountered an anti-Israel professor, stood up to her and convinced the leadership of the university to change the entire class curriculum.”

Kaufmann’s involvement in campus Jewish life began when he joined Sinai Scholars as a freshman. He will graduate in 2019 and plans to go to law school. Eventually he hopes to run for public office.

Also during the conference, Ohio State University student Devon Smith wowed the crowd as part of a panel where three young Jewish women spoke about their connection to Judaism and Israel. Smith explained that she feels “confident in saying I’m a Jew” thanks to her experiences with Ohio State’s Chabad and Sinai Scholars programs, directed by Rabbi Zalman and Sarah Deitsch.

“I’m not part of the majority and that’s OK,” she said. “I feel pride and I feel joy in singing Shema Yisrael. This is who I am … I feel like I’ve really found a home in my faith.”

The Sinai Scholars leadership and education program is a joint project of Chabad on Campus International and the Rohr Jewish Learning Institute.

Mosaic United, a US based foundation, has partnered with Israel’s Diaspora Affairs Ministry, in an effort to support Jewish and Israel education on American campuses. Chabad is one of the three major partner organizations of Mosaic United, together with Olami and Hillel International.

“I’m proud to see two of our star activists honored by Mosaic United,” said Rabbi Yossy Gordon,  Executive Vice President of the Chabad on Campus International. “Both Gabriel and Devon are inspirational Jewish leaders on campus. I’m delighted that Chabad had such an impact on them and that now other Jewish students are able to benefit from their volunteer work.”