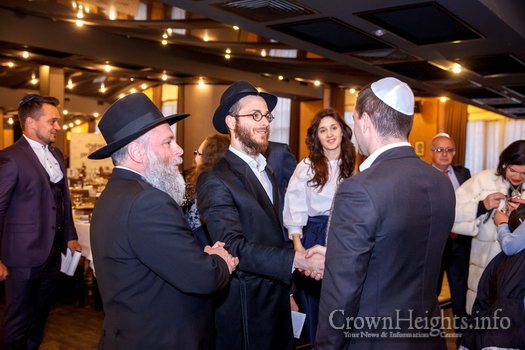 On Erev Pesach, Rabbi Yonathan Markovitch, head Shliach and rabbi of Kiev met with the President of Ukraine, Mr Petro Poroshenko, in the Presindent’s personal office.

The President was interested in knowing how the Jewish communities in the country were doing and was very proud that Ukraine is currently the country in Europe with the least antisemitism. Rabbi Markovitch let him know about the situation of the communities and that the Kiev community distributed over 9,000 Matzot Shmurot to Jews all over Ukraine.

The President congratulated the Rabbi for his work on behalf of Ukrainian Jewry and said that his government would help with the development of Jewish communities in Ukraine.

In addition, like every year, in honor of Pesach, Prime Minister of Ukraine Mr. Vladimir Gruysman and the Mayor of Kiev, Mr. Vitaly Kliczko, sent a letter of greeting to the Jewish community of Ukraine.

The Seder itself was celebrated in all its glory by about 350 people in Kiev and it was made sure that no Jew, in the city, remained without a piece of matzah for the Seder.

In addition, the new Shluchim Ariel and Cherry Markovitch organized for the first time a special Seder night for Young Professionals.