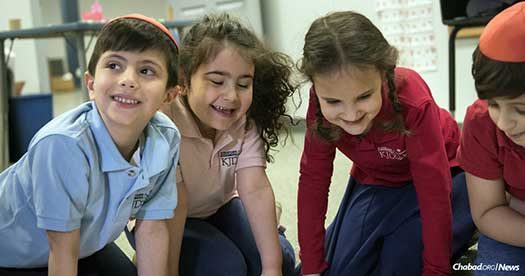 As far as Sara Zemel is concerned, her school is the perfect size. “I know every single person,” says the 11-year-old. “And it’s better that way.”

With nearly three-dozen students, the Stanford Eisenberg Knoxville Jewish Day School—a kindergarten through fifth-grade elementary school—is admittedly small, but it has been making a name for itself in terms of scholarly achievement and a lasting impact on Jewish identity.

According to Sara’s parents, Michael and Siri Zemel, the school is “phenomenal.”

“It hits all of the right notes academically,” Michael Zemel tells Chabad.org. “Jewishly, it’s helping my daughter become a strong, independent Jewish woman who is knowledgeable about herself as a Jew and about her role in the world. What more can I ask for?”

Head of school Miriam Esther Wilhelm, who also co-directs Chabad of Knoxville, Tenn., with her husband, Rabbi Yossi Wilhelm, explains that their theory is simple: Give kids the absolute best education in the most nurturing environment possible.

These days, that means an emphasis on STEAM: science, technology, engineering, art and math.

“We apply this idea to everything,” explains the rabbi, “from holiday projects to lessons about the weekly Torah portion.” (In fact, it’s been dubbed “the lab school” by local media.)

Students take on active roles as project managers at school, which veers from the standard, lecture-based learning system. There is an emphasis on caring for the environment and others, the latter as part of a “Kavod Code,” stressing respectful and honorable behavior.

“It’s such a happy place to walk into,” says Wilhelm. “It’s all about personal attention—children are the focus. They’re not just another backpack hanging on the wall.”

An estimated 2,500 Jews live in the greater Knoxville area among a general population of nearly 600,000. Jewish students in public schools are often the only ones in their class, according to Wilhelm, and that can make it tough to develop their Jewish identity.

The issue initially came into play years ago while Wilhelm was facilitating a “Mommy & Me” class, and some of the mothers expressed concern that as their children approached kindergarten, that they would be the “token Jew” in their public-school class. That core group expressed a strong interest in a school committed to both Jewish education and a top-notch general-studies program.

Around the same time, a woman named Ann Friedlander lived in Knoxville and was an active member of the Jewish community. She eventually moved away, but on a visit to the Wilhelms back in 2005, she heard them talking about plans to open a Jewish day school. She mentioned that her mother, Helen Eisenberg, was interested in giving seed money for Jewish project and naming it in memory of her husband, Stanford Eisenberg.

“It was hasgachah pratis [Divine providence],” says the rabbi, “turning a dream of a school into a reality.”

The Stanford Eisenberg Knoxville Jewish Day School opened its door in August 2006 with a combined kindergarten/first-grade class—and a grand total of eight students. Today, the K-5 school enrolls 30 children; most live in Knoxville proper, though some come in from the surrounding suburbs. (The next Jewish day school is about a three-hour drive in any direction.)

“Our goal over next few years is to grow our numbers,” says Esther Miriam Wilhelm. “We would be full if we reached 45 students; that’s what we are currently set up to accommodate. One challenge is that a number of young families come to the city as a stepping stone for their careers. When they move out of Knoxville, it affects enrollment.”

Because of the size of the community, she says people have to be proactive there in making Jewish connections. “Your child isn’t just going to have a Jewish friend in school; you have to give them opportunities to meet. That’s why we have families who send their kids here who might not consider a Jewish day school if they lived in a larger city.”

The Wilhelms, parents of five children, are both from cities with large, tight-knit Jewish communities themselves (he is from Brooklyn, N.Y.; she’s from Chicago). As such, they understand the difference between urban and more suburban lifestyles—and how families in Knoxville need to commit and drive to programs and activities that are more accessible in larger Jewish communities.

To keep students connected with Judaism and each other after graduation, the school held several alumni events that led to the creation of a CTeen program where they can socialize, continue their Hebrew skills and Jewish education, and get involved in projects that benefit the community. The group is open to all area Jewish teens, not just those from the day school.

“Our alumni have done amazingly well as they go on to middle and high school,” explains Wilhelm. “They leave with a strong Jewish identity, and answers to questions typically asked here about Jews and Judaism. In that sense, they are well-equipped to be ambassadors of Jewry, who can teach others. They know Jewish customs, traditions, knowledge and information.

“More than 70 percent of our graduates are in honors classes, and our very first graduating class is just started college,” she explains. “Our students leave knowing how to learn; more than that, they have a joy of learning. They have strong self-identities and social skills gained from working with kids they may not have chosen as friends in a larger school.”

Sara will be among this year’s graduates, and her father notes that finding a middle school has been a little tough since the bar has already been set so high.

“We have to make hard choices about where she is going next year,” acknowledges Michael Zemel. “This [school] is going to be very difficult to surpass.”