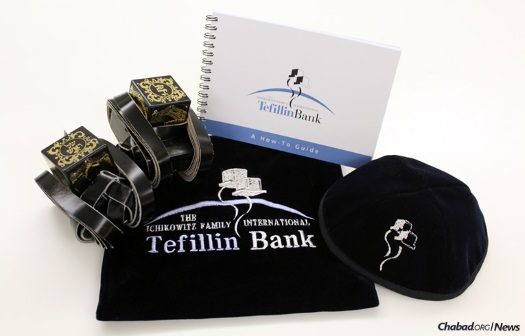 Jewish men in a group of countries around the world, including Azerbaijan, Brazil, China, Hungary, Mauritius, Mexico, Morocco, Portugal and Puerto Rico, will now have access to an affordable pair of tefillin, timed to the 50th anniversary of the Rebbe’s Tefillin Campaign.

Ruby Ichikowitz, 23, takes putting on tefillin seriously. He also makes it a practice to take “tefillin selfies” (or what he dubs, “telfies”) when he travels to exciting places in the world, aspiring one day to be able to say that he’s put them on in all seven continents.

“I can recount so many times in the last decade that it’s helped or guided me in many different ways,” says the South African native, who is currently living in Israel for the year and working on an MBA. “From a personal point of view, I can only wish that it has the same effect on other people.”

To that end, his family has sponsored a tefillin bank in South Africa for the past decade, and this year, they have joined with the Shluchim Office—the central Chabad-Lubavitch resource center based in Brooklyn, N.Y.—in going global.

The project started when he and his family were congregants in Rabbi Dovid Wineberg’s synagogue; the Chabad-Lubavitch rabbi was helping Ichikowitz prepare for his bar mitzvahat the time. The community was concurrently facing challenges around the topic—both because it was difficult (and expensive) to get a good set of kosher tefillin in South Africa and because many men had become distanced from the mitzvah.

So Ichikowitz’s extended family started up the South African tefillin bank, which this year is slated to expand to communities around the world facing similar challenges. The expansion comes in the 50th year since the Rebbe—Rabbi Menachem M. Schneerson, of righteous memory—launched the Tefillin Campaign to encourage Jewish males over the age of 13 to perform the mitzvah.

It’s a mitzvah that connects the head and the heart, stresses Ichikowitz, adding that the two phylacteries having implications far beyond the physical binding of the tefillin. “On a larger scale, what this bank has achieved is that we are now seeing [more] unity among Jews in South Africa,” he says, explaining how the bank has played a role in bringing people back to the religion. “It has connected them with G‑d and connected us all together through this mitzvah.”

Joining with the Shluchim Office has allowed Wineberg to help facilitate the relaunch of the global tefillin bank initiative in September with a limited number of countries, including Azerbaijan, Brazil, China, Hungary, Mauritius, Mexico, Morocco, Portugal and Puerto Rico, which is still in desperate shape after Hurricane Maria. The plan is to reach more and more places to get tefillin into the hands of Jewish males committed to putting them on daily, he says. In partnership with sponsors from the local regions, an approved applicant, who pays a nominal fee of $50, will get his own set of tefillin.

“In this way, it’s sustainable,” says Wineberg. “Each location will be invested. They’ll have local people invested, and it will continue in the long term.”

Applications have been steadily rolling in, he notes, with about 10 new ones in the past few weeks alone. Wineberg is part of a small committee that reviews the applications. Once a candidate is confirmed, the tefillin are shipped to the associated area rabbi, who gives them to the recipient.

“There’s been great excitement as the word has spread,” he says, adding that even more countries are hoping to get involved down the road, as the program continues to grow.

Meanwhile, representatives from the program’s affiliate countries will gather this weekend at the International Conference of Chabad-Lubavitch Emissaries (Kinus Hashluchim) for a breakfast meeting that will offer a chance to learn from others’ experiences.

“Tefillin has the power to change people’s lives,” says Rabbi Mendy Shemtov, one of the project’s organizers. The very first global tefillin bank, launched in 2005 by the Shluchim Office in conjunction with The Shul of Bal Harbour, Fla., distributed more than 5,000 pairs over the course of eight years. It serves as a model of how such a program could make an impact, says Shemtov, adding that this current effort intends to duplicate such previous success.

“A lot of Jews can find it hard to pay for tefillin,” states Shemtov. “The tefillin bank makes it easier for someone to say, ‘It doesn’t cost me that much money. I’m ready to commit. This will be my pair, and I’ll put it on daily.’ ”