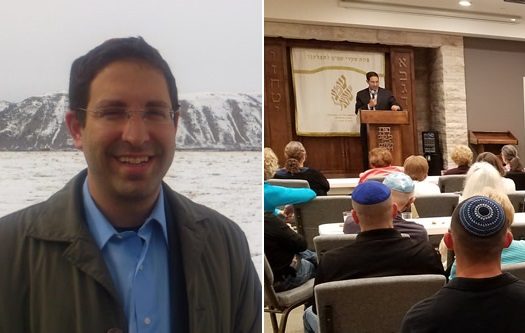 JPost Journalist Makes it to All 50 States

From Chabad.org by Ariel Dominique Hendelman:

Around the world in 80 days? How about around the U.S. in 50 states? On Nov. 5, Jerusalem Post chief political correspondent Gil Hoffman made history as the first paid lecturer to speak about Israel in all 50 states.

Hoffman’s talk in Honolulu on peace and politics in Israel marked the conclusion of a tour that began back in 2002.

Over the years, he has lectured on behalf of AIPAC, the Anti-Defamation League, American Friends of Magen David Adom, the Jewish National Fund and Chabad-Lubavitch.

“Chabad holds a special place in my heart,” says Hoffman. “There’s no way I could have gotten to all 50 states without Chabad.”

At a certain point in the early days of his speaking tour, Hoffman set a goal for himself of lecturing in all 50 states. He was introduced to rabbis who run Chabad Houses in Montana, Utah, Idaho and Wyoming. As a result of these connections, Hoffman embarked on a four-day speaking tour in the spring of 2013 with the help of Rabbi Chaim Bruk in Montana, Rabbi Benny Zippel in Utah, Rabbi Mendel Lifshitz in Idaho and Rabbi Zalman Mendelsohn in Wyoming.

Shortly afterwards, Hoffman wrote an article titled “Frum in the Fly-Over States” about the experiences of these four rabbis and families. “It’s very challenging to raise children in that kind of isolated environment. They’ve handled it in different ways,” explains Hoffman. “Rabbi Bruk built a mikvah. I told a story about a lady in Wyoming who took a woman to a mikvah in a stream and was confronted by a moose. I have a tremendous amount of respect for the shluchim [emissaries] for bringing Yiddishkeit to the middle of nowhere.”

Herein lies the connecting thread. Hoffman has been delivering a message about Israel through his lectures of making “the desert bloom”—that is to say, on Israel’s accomplishments as a start-up nation. He found that the message of the emissaries was very similar—making the Jewish desert bloom all over the world by bringing a love of Judaism and the Jewish people everywhere. Hoffman cites that his speaking tour—and specifically, his effort to cross America—has given him a greater respect for Chabad: “They’ve beaten me by about a year to all 50 states. But I was in South Dakota first.” (A Chabad House opened in South Dakota in the fall of 2016.)

Hoffman’s lecture tour has brought him to varied locations, including all kinds of synagogues and even churches. Audiences ranged from 10 to 300 people. The smallest audience, he notes, was at the Chabad House in Fargo, N.D., where Rabbi Yonah Grossman had only just started out. Hoffman emphasizes that audience size fluctuated depending on location, but regardless, the message was always one of connection: to the listeners and Israel, and more often than not, to Hoffman and the Chabad of a particular locale.

“Other speakers go to New York, L.A., Miami and Chicago,” says Hoffman. “It’s so much easier in those four cities. But I’ve made it a point to reach out to people who could potentially love Israel all around America. In that regard, I think I’ve really modeled myself after Chabad.”

One of the first Chabad Houses that Hoffman ever spoke in was in Yorba Linda, Calif., directed by Rabbi David Eliezrie. The rabbi subsequently opened doors for Hoffman by recommending him as a speaker to other emissaries.

But Hoffman’s connection to Chabad goes all the way back to his college days, where he connected with Rabbi Dov Hillel Klein of Chabad on Campus at Northwestern University in Evanston, Ill. “He gave me a proud Chabad perspective in my time there; my fondness for Chabad really started with him,” relates Hoffman. “He’s a wonderful man—one of the earliest Chabad on Campus rabbis.” Hoffman enjoyed many Shabbat meals with Klein and helped him make a minyan every day. Such was their close relationship.

Hoffman’s story is interwoven with Chabad. He has been both inspired and supported by the many shluchim he has met along the way. As someone who talks to so many different audiences on a regular basis, he notes a commonality that he shares with Chabad, one that may seem counterintuitive—that “we are not political.”

“It’s funny,” says Hoffman, “because I’m the political correspondent of the Jerusalem Post, but when I’m speaking I don’t present a particular point of view. I tell people what’s going on in Israel. I don’t take sides in Israel’s politics, but when it’s Israel against its enemies, I defend Israel.”

Similarly, he has seen how Chabad passes on a love of Israel and the Jewish people to their congregants and their community in a nonpartisan way: “They just care deeply about what happens here.”