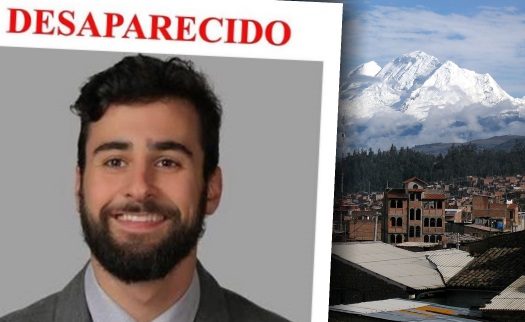 What do you do when someone you love disappears without a trace? Friends and family of Jesse Galganov, a Montreal native who was last heard from in Peru on Sept. 28, have been living that nightmare for more than a month now.

At the time, the 22-year-old told his mother, Alisa Clamen, that he would be out of reach by phone for a few days while he embarked on a multi-day trek near the Peruvian city of Huaraz.

In the days and weeks since his disappearance, family and friends have marshalled the support of the Peruvian authorities, the Canadian embassy in Peru, the FBI, as well as communication giants like Apple and T-Mobile to try to track down Galganov, who authorities suspect may have been kidnapped.

Galganov’s friends have also raised significant funds, allowing his mother to travel to the South American country, where she has been working with those on the ground who are leading the desperate struggle to locate her son. A recent graduate of Wesleyan University in Middletown, Ct., he was about to enter medical school.

Their most recent effort is to encourage Jews all over the world to keep Shabbat in the merit of Chaim Yosef ben Aliza, and for Jewish women and girls to light candles prior to its start.

“I am touched beyond words at the outpouring of community support,” writes Clamen from Peru. “From challah bakes to prayer services—and now, people who don’t necessarily observe Shabbat on a weekly basis are choosing to do so in the hopes that the power of this collective observance will help us find Jesse. While I cannot answer every message, please accept this as my personal note of thanks for all of your prayers, all of the positive vibes and all of the support.

“This helps keep me going in the search to find my son and in my determination to bring Jesse home,” continues Clamen, who concludes her message with the Hebrew words im ahavahvetikvah (“with love and hope”).

Mushky Paris, volunteer coordinator at the Montreal Friendship Circle where many of Jesse’s friends serve as volunteers, says “everyone can do something more. If you’ve never kept Shabbat before, make a small step—light candles before sunset and have a Shabbat meal. If you’re up to it, join a family for Shabbat and experience the whole thing.”

The campaign, which is trending on social media, encourages those who observe Shabbat to invite others to their homes.

Many of Galganov’s friends will gather for the Friday-night meal at the Rohr Chabad Jewish Center at McGill University. For some, it will be a first, but they say they are excited to do something positive for their friend.

“I bumped into the son of a client of mine who does not observe Shabbat, and he and his friends heard about the projects, and they will be getting together for Jesse,” reports local resident Natalie Fyon.

In the heavily Jewish Montreal suburb of Côte St.-Luc, many people will gather after their meals at home for a communitywide Torah class at the the Beth Chabad community center.

Beyond Quebec, the movement has spread to the nearby Canadian province of Ontario, where Shabbat events are being held at Chabad on Campus centers in Waterloo, London and Ottawa. There is even a Shabbat for Galganov planned in Newfoundland, where Chabad just put down roots earlier this year.

Organizers report that events are also planned in the United States and beyond.

“There have been so many people who have been doing so much for Jesse,” says Alexia Maman, who grew up in same neighborhood as Galganov and is coordinating the Shabbat campaign. “It’s now been a month, and the feeling is that if anyone can make a difference now, it is G‑d. That’s really the driving force behind why we are asking everyone to do what they can to make a difference.”

Based in Lima, Rabbi Zalman Blumenfeld of Chabad of Peru says that he has unfortunately had similar experiences with other tourists, particularly backpackers, including one who was evacuated last week by ambulance plane.

“We have been working on this search from the beginning,” says the rabbi, “and he has not yet been found, but we hope and trust that with the merit of people keeping Shabbat all over the world, he will.”