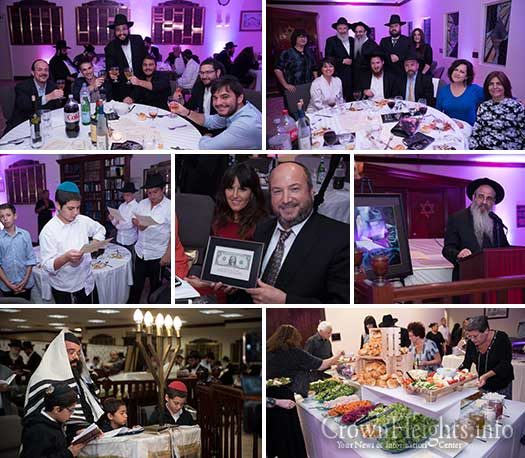 Chabad of South Broward hosted their 36th Annual Dinner this past Motzai Shabbos, with dinner proceeds benefiting those still affected by Hurricane Harvey, which has left 10,000’s still without power. Following the dinner the congregation recited the customary Slichos at 1:15am.

Proceeds of the dinner is providing hot free catered meals every Shabbos and every day of Yom Tov at Chabad of South Broward Headquarters in Hallandale Beach. There are still tens of thousands of people without power in South Florida. Hundreds are expected to attend every free communal meal in Hallandale Beach. The Dinner was a Feast of Thanksgiving – Seudas Hoda’ah, for everyone who survived Hurricane Irma.

​The ​dinner began at 9:30pm and was followed by a magnificent Selichos at 1:15am led by Cantor Rabbi Yossi Lebovics and the Lebovics Boys Choir.

All dinner ​participants received as a New Year’s gift the newly published Holocaust Memoirs of the late Chief Rabbi Pinchas Hirschprung זצ״ל from Montreal. Rabbi Hirschprung wrote these memoirs in 58 installments in Yiddish in 1944. It was recently translated and published by the Azrieli Foundation.

“This book is fascinating” said Rabbi Raphael Tennenhaus, Chabad’s Executive Vice President. “Coming from Hurricane Irma, and days before Rosh HaShanah, this riveting true story of a Torah giant​’​s self sacrifice in Poland and Lithuania during the War, is a perfect read to prepare for the Days of Awe”.

The day Mrs. Rachel Newman, Rabbi Hirschprung’s daughter from Toronto, ordered the books for the Chabad Dinner from the Azrieli Foundation, was the day Rabbi Hirschprung said Kaddish for his beloved family members who were killed Al Kiddush Hashem.

Rabbi Hirschprung was the guest speaker at the Congregation Levi Yitzchok-Lubavitch of Hallandale Dinner in the mid 1980’s.

The Annual Dinner of Congregation Levi Yitzchok – Lubavitch always received a personal letter addressed to the Dinner Participants from the Lubavitcher Rebbe (1902-1994). The letter read this year, by Rabbi Mordy Feiner, Director of Adult Education, was from 5751, with the relevant theme of the impact of holiness in a year when Rosh Hashanah is Thursday and Friday, followed by Shabbos, and therefore a Chazakah of holiness.

The last letter signed by the Rebbe hours before his first stroke in 1992, was addressed to Congregation Levi Yitzchok – Lubavitch.

All Dinner Participants were surely blessed at this Dinner as well, as the words of the righteous are eternal.

A memorial prayer was said, accompanied by Sharon’s sweet background music, in memory of Mr Max Rubenstein, z”l, who was a pillar who partnered with Chabad of South Broward for 35 years, to build the infrastructure of Torah, Chassiduth and Jewish Education, in Hallandale Beach and throughout South Broward.

For all information about Chabad of South Broward, please log on to Chabadsouthbroward.com. 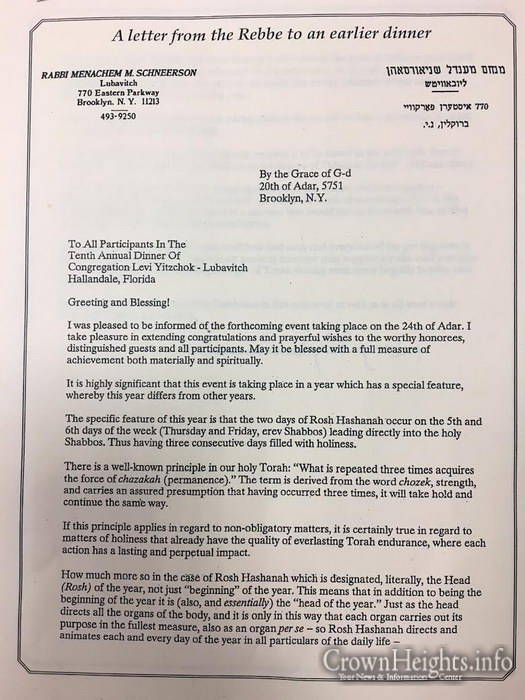 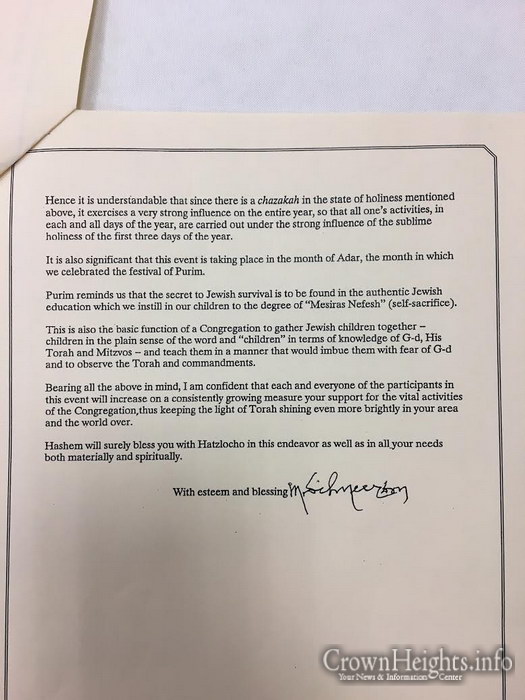