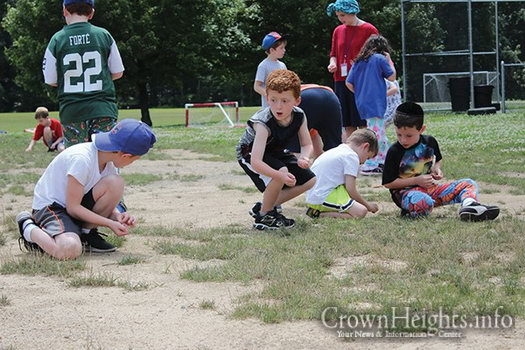 From the New Jersey Jewish News by Johanna Ginsberg:

On a recent summer afternoon, 4- and 5-year-old campers were rolling plastic rings on the field at Camp Gan Israel in Randolph under the direction of coach Michal Robinson, while their older peers were learning Krav Maga from Wendy Bergstrand. When this visitor approached, the younger campers distractedly ventured over and talked about the day’s activities.

“I like the dinosaur treasure hunt,” Maya said. “I found golden eggs,” Oren said, then clarified: “It isn’t real. It’s pretend!” Ava likes playtime, especially playing with Play-Doh. “I like to make a snowman!” Emily proudly declared, “I can swim by myself!” and Brielle pointed to the empty spot in her mouth where a tooth formerly resided. “You can see a new tooth growing underneath!”

Camp Gan Izzy, as it is known, is a spinoff of Gan Israel in Morristown, which is housed on the campus at the Rabbinical College of America (RCA). The second Gan Izzy expanded to the Gottesman RTW Academy campus in Randolph last year.

Both camps are part of a network of Gan Israel day camps in 40 countries, originally established in 1956, all affiliated with Chabad Lubavitch. The camp at the Morristown location has been around every summer since the 1970s, except for 2014, when it closed due to budgetary constraints.

Now in its second year in the new location, Gan Izzy in Randolph has almost doubled in attendance from last year, from 33 campers, ages 2-10, to 65 campers.

“We had reached capacity in the Morristown space,” said Rabbi Mendel Dubov, director of both Morris County camps.