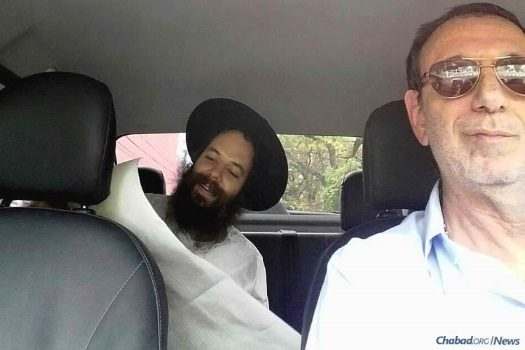 Rabbi Nachman Stulman, co-director of Beit Chabad Campinas, reads Megillah for the 63-year-old driver during a car ride this Purim.

Uber Driver Opens the Door for Rabbi After Rabbi

Milton Appelbaum has had a series of unexpected encounters that gladly have him performing the mitzvah of tefillin time and again… right after he drops off Chabad-Lubavitch rabbis at their destinations in Brazil.

Put on tefillin, of course!

At least, that’s what Milton Appelbaum, 63, a driverfrom São Paulo, Brazil, found himself doing time after time in recent years. Uber, one of several ride-sharing companies he drives for, claims it has made “1 billion connections . . . and counting.” For Applebaum, at least, it has been a connection on a decidedly deeper level.

The series of unexpected encounters began on Dec. 29, 2015, when Rabbi Mendel Begun, a 27-year-old Chabad-Lubavitch emissary at Central TiferetLubavitch in São Paulo, hailed a ride in Appelbaum’s car. Discovering that his driver was Jewish, the two started talking about Jewish life in the city. At the end of the ride, Begun asked Appelbaum if he would wrap tefillin. Appelbaum agreed.

Some 50,000 cars participate in ride-sharing programs in São Paulo, the financial center of Brazil and most populous metropolis in the Americas. The young rabbi and driver live on the opposite ends of town and the two parted ways, never expecting to meet again.

So they were both surprised this past January, a little more than a year after their first encounter, when Begun found himself once more in Appelbaum’s vehicle.

Again, the two wrapped tefillin, and then the driver asked if he could snap a selfie for posterity. “Something piqued my curiosity, “ Begun tells Chabad.org. “I asked him if he’d met any other rabbis recently.”

Appelbaum opened up his phone, showing a picture of him putting on tefillin with Rabbi Avraham Meir Berkes, a Chabad rabbi in Rio de Janeiro.

The next day, Appelbaum texted Begun a new picture: This time it was a chance wrapping with Rabbi Levi Yitschac Slonim of Beit Chabad Perdizes/Sumare.

Describing himself as a “spiritual person” (though not so close to religious practice), Appelbaum says he was deeply impressed by his rabbinical riders. “That was the first time I’d ever really spoken to a rabbi,” he says of Begun. “These meetings have been very special.”

Appelbaum has since become a fixture among São Paulo’s Chabad emissaries, meeting them practically everywhere he goes. He’s even started working as a regular driver—bringing the Slonim children back from school every day—with a customary tefillin-wrapping at the end of the trip.

At Purim time, Slonim asked him to join the community Megillahreading, but Appelbaum informed the rabbi that he had to work.

His next ride though, turned out to be chauffeuring a Chabad rabbi who was going across town. So Appelbaum was able to hear the Megillah on the way, read aloud by Rabbi Nachman Stulman, co-director of Beit Chabad Campinas.

When Begun needed to make a few trips recently, he figured that he’d call Appelbaum. But the driver informed him that he was simply too far away. When the time came to summon a new car for the return trip, who should show up? Just after their call, a ride came in for Appelbaum with a destination blocks away from Begun.

Begun snapped a photo and sent it to Slonim.

“Amazing!” was the reply. Slonim was out of town for the day, meaning their regular mitzvah would be missed. “Please put on tefillin with him,” came the response from Slonim.

In Chassidic thought, the performance of a mitzvah such as tefillin forges a connection between the one performing it and G‑d. Even a one-time mitzvah creates an everlasting connection, and tefillinis not the only mitzvah that this busy cab driver has been able to fulfill
thanks to his new connections.

“I feel this new connection to Judaism, to my roots,” says Appelbaum. “I always feel as if G‑d is with me, and now I’m being given a chance to come closer to Jewish practice.”