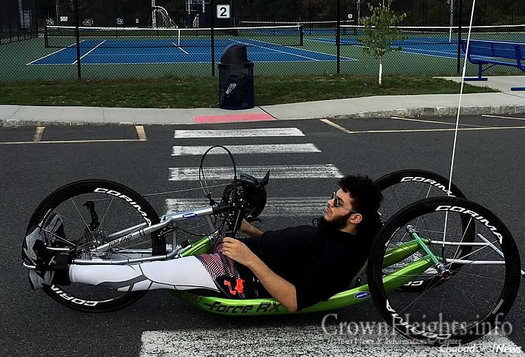 Joseph Volfman will participate in the Jan. 29 Miami Marathon using a recumbent hand-cycle. Part of “Team Friendship,” he will be raising money for Friendship Circle of New Jersey.

Joseph Volfman never believed he’d have the opportunity to experience the thrill and freedom of riding a bike. Born with cerebral palsy, cycling was just one more physical activity out of many he was unable to do. But in 2011, when he was 12 years old, he received a custom bike.

And it profoundly altered his life.

The bike was given to him thanks to 11-year-old Olivia Lefkovits, of Livingston, N.J., and her special bat mitzvah project, called Olivia’s Friendship Cycle.

Now, at age 17, Volfman competes in track-and-field, archery, swimming and mono-skiing. But cycling is his passion. He loves the peace that comes from being outside and the speeds he can reach, averaging between 20 and 25 miles per hour using his own arm strength to propel the bike. He trains three hours a day with the goal to compete against other elite athletes in the 2020 Summer Paralympics, to be held in Tokyo.

As part of his journey, Volfman, of Springfield, N.J., will join 250 members of “Team Friendship” from around the country this Sunday for the 26.2-mile Miami Marathon (and 13.1 half-marathon), where up to 30,000 other people will participate.

It’s also an opportunity for him to raise money for Friendship Circle of New Jersey, the local branch of the international Chabad-affiliated organization, which pairs teen volunteers and children with special needs, and offers a range of support services for their families. Based in Livingston, Friendship Circle of New Jersey has 850 volunteers and serves 325 families.

“I can finally give back to the organization that gave me my independence and freedom—freedom that came from receiving my first bike,” says Volfman.”

He wasn’t the only recipient. Together with the community, Lefkovits and her family raised a little more than $80,000 so that 100 children would receive a custom bike.

Lefkovits, now 17, explains that early on, “I thought I was the one giving. But in the end, I was the one who received so much. The overwhelming joy that came from seeing children—some whose doctors hadn’t believed that it would be possible for them to ride a bike—was beyond anything I could have imagined. It not only inspired me, but gave me an appreciation for life and the ability to notice the beauty in everyone.”

She says she is grateful, humbled and overjoyed that her bat mitzvah project continues to have a profound impact on Volfman’s life and others. She credits her parents and grandparents, who taught her the importance of giving and chesed—loving kindness and compassion. “They taught me to think big, to never stop or place limits on giving—not just financially, but with time and with my heart.”

Olivia’s Friendship Cycle became the inspiration for Friendship Circle of Michigan to host “The Great Bike Giveaway,” an annual national giveaway they started in 2012, providing adaptive bicycles to children with special needs around the country.

‘G‑d Made Me Complete’

Volfman, who now uses a recumbent hand-cycle, says he feels connected with “all the people who have helped me in the past and continue to assist me in my journey. It’s people who have enabled me to pursue what I love.” Two of them are Rabbi Zalman and Toba Grossbaum, executive directors of Friendship Circle New Jersey.

The rabbi says that he, in turn, admires Lefkovits and Volfman for their determination and leadership. He compares their ability to affect community with the theme of last week’s Torah portion, Shemot, which describes the actions of Moses—of how important it is for a leader to stop, turn and notice the miracles around them, as he did with the burning bush. Taking notice is a quality Grossbaum believes these young adults possess.

When Volfman rides for Team Friendship on Jan. 29, he’ll have in mind those still struggling to see themselves as whole.

Before he received his first bike at the age of 12, he relates, “I was a loner and didn’t have high self-esteem. Every day, I knew I was different from other kids, those who could participate in any sport. But I now see and understand that G‑d made me complete—my 100 percent is just distributed in a different way.”

“My goal,” he says, “is to raise awareness and shatter stereotypes society places on those with disabilities. I want others not to see the ‘dis’ in disability, but the ability. Everyone has challenges. Mine are physical. Though I use a wheelchair, I now know never to set limits. Take what you love and use it to bring positivity into this world. This is my purpose.”