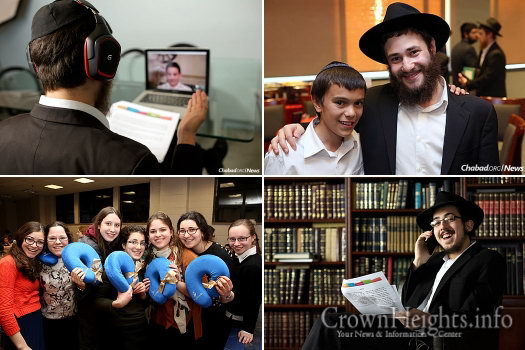 When Yeruchem Engel recently became a mentor for MyShliach, he didn’t need much training. The 17-year-old from Colorado was one of a number of boys at the receiving end of the “Big Brother/Big Sister” program at its inception 10 years ago.

“I looked forward as a 7-year-old to the time on the phone with my mentor each week,” recalls the Denver native. “Although I was fortunate enough to live in a city where I went to a Jewish school and had Jewish friends, having an older yeshivah student take time out of his schedule to learn and speak with me was very exciting.”

Now, says Engel, “I am grateful to have the opportunity to pay it forward through learning and chatting with my young buddy, Mendel Kantor—knowing how important this is to him, as it was to me when I was a child.”

This month marks 10 years of MyShliach. Established in 2007, its goal is to provide resources that augment formal education to further spiritually nourish and nurture the children of Chabad emissaries worldwide. It is a project of Suite 302, a division of Merkos L’Inyonei Chinuch, the educational arm of the Chabad-Lubavitch movement.

The organization offers an array of programs to benefit these young boys and girls living in locations that dot the globe. Among them is the “Birthday Zone,” in which a birthday package arrives right to their door. It includes two birthday gift certificates for the child to redeem on his or her next visit to the Crown Heights neighborhood of Brooklyn, N.Y. (one for ice-cream and one for a toy). Another popular service is the “Book Library,” where children, for a small monthly fee, can borrow up to six books at once from a Jewish library based in Brooklyn and have the books sent to them to enjoy.

For these kids—often the only Chassidic or observant child in town—such services offer an invaluable sense of connection.

Still, the most popular initiative of MyShliach remains its flagship “Big Brother/Big Sister” program. Introduced a decade ago with a pilot group of 30 boys, it provides the child with a mentor who contacts them on a weekly basis. The phone calls—or nowadays, the wide-ranging modes of connecting online through voice, video and text—are typically structured around a shared study session. But more importantly, they provide an opportunity for the two to share news, and for the young child to seek advice and gain encouragement from his or her mentor, mostly likely a teenager themselves, though some are in their early 20s.

In 2008, a parallel program was rolled out for girls.

To date, 232 boys and 181 girls look forward to their time each week with their “Big Brother” or “Big Sister.” Since its founding, some 2,600 children have participated.

“Our goal is to create and facilitate cherished friendships for young boys and girls who may be living in a city without Jewish infrastructure and friends their own age,” explains Rabbi Mendy Shanowitz, director of MyShliach. “It is our hope that the hours spent talking, learning and laughing prove beneficial for both the children and their mentors, as they enjoy meaningful and heartfelt discussions, growing in their Yiddishkeit together.”

Mentors in the MyShliach program learn best practices during their training session and have a curriculum available to them for following. They are keenly attuned to the importance of this friendship to their mentees.

Mendel V., who grew up Rotterdam, Netherlands, a city without a Jewish school or many friends to play with, is now in his second year as a mentor. On the phone, he marvels about how much the “Big Brother/Big Sister” program has evolved in the last 10 years since he himself benefited from it as a child.

“I remember waiting every Wednesday evening for that phone call from Morristown, N.J., to come from across the world,” he remembers. “My mentor and I would learn together, and chat for a few minutes. Now, there is an incredible curriculum available for me to teach my young friend in Davenport, Iowa, as I sit here in Pittsburgh, Pa. It’s really amazing!”

The weekly conversations—ranging from 45 minutes to more than an hour—are just the beginning for some pairs. A commitment is suggested for two years from the mentors, so that real ties can be made between them and their mentees.

Sometimes, those friendships can last a lifetime.

Engel speaks fondly of his mentor, Levi Shaw. When they occasionally run into each other these days in Crown Heights, where Engel is a rabbinical student, they catch up—and it’s like old times again.

For his part, Shaw says: “I really enjoyed learning with Yeruchem. His attentive participation motivated me to prepare a sichah—a discourse of the Rebbe [Rabbi Menachem M. Schneerson, of righteous memory]—to learn together week after week.”

He has since moved to London with his wife, Shaina Bracha, as Chabad emissaries.

As for 10-year-old Mendel Kantor, learning long distance with Yeruchem, he says, is the highlight of his week: “He always takes my hard questions and will even look it up for me if he doesn’t know the answer.”

“We appreciate all that MyShliach does for our children,” says his mother, Chanie Kantor, co-director of Chabad at Temple University in Philadelphia with her husband, Rabbi Baruch Sholom Kantor. “It’s the small things, like a library book, birthday gift or a special phone call, that make all the difference.”