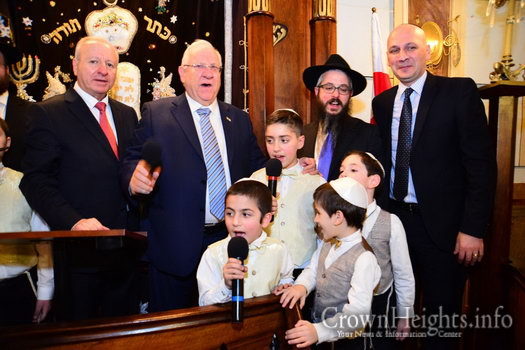 Israeli President Reuven “Ruvi” Rivlin met with representatives of the Georgian Jewish community, including Chabad shliach Rabbi Meir Kozlovsky, in the Great Synagogue in Tbilisi Tuesday before he finished his official visit in Georgia and flew back to Israel. The event was attended by the president of the Jewish community, bureau chief Ms. Rebecca Ravitz, Israel’s ambassador to Armenia, and attorney Mordechai Tzivin.

The children’s choir of Chabad’s Ohr Avner school performed at the event, with President Rivlin joining in to the singing.

The President opened his speech by giving condolences to the families of the soldiers who were killed in Sunday’s terror attack in Jerusalem. “From here, from a distance, I send my concern and prayers for the welfare of the wounded, some of whom are fighting for their lives,” he said. “We cannot give terrorism the power to weaken us. We must stand strong together.”

“Relations between Israel and Georgia are good, but we need to do more to keep them strong,” the president said to the community, stressing, “Mutual responsibility is the secret behind the strength of Israel, both in the past and today. The Jewish world and Israel are responsible for one another. We will do everything that we can to continue to maintain the warm relationship with you and with and Georgia, and I am sure that we will succeed.”