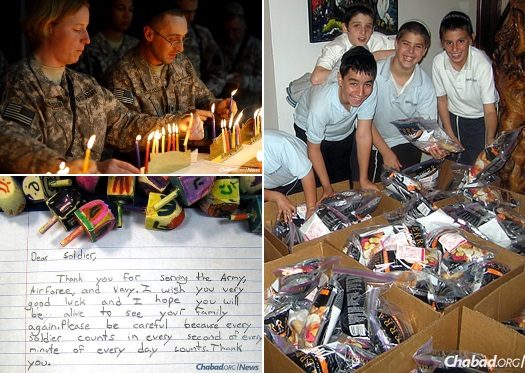 Call it the mitzvah-multiplier effect.

Over the course of the past decade, the Florida-based, Chabad-affiliated Aleph Institute has sent thousands of Chanukah gifts to children whose parents were in the military or serving time in prison.

Now, it is looking to get many others into the giving spirit as well.

On Veterans Day, which fell on Nov. 11, Aleph officially launched an effort asking Jewish day schools and community organizations across the United States to collect Chanukah gifts for children of those serving in the U.S. military, and/or send menorahs, candles, dreidels and chocolate Chanukah gelt directly to military personnel. The toy drive also applies to children of incarcerated Jewish men and women throughout the United States.

The project offers a timely occasion for educators to teach young people about the importance of remembering members of the Jewish community who are all too often forgotten.

“This provides the children with an opportunity to learn about giving back,” says Rochel Katz, assistant to Rabbi Aaron Lipskar, executive director of the Aleph Institute. “They learn to give to kids who don’t have it as good as they do. They learn to ask, ‘Why should these kids not get to celebrate Chanukah?’”

As long as the organization has been sending Chanukah gifts, Aleph has been collecting the presents—or the money that goes towards purchasing them—and handling the wrapping and distribution of them. Wherever possible, gifts arrive with a note written by the loved one who couldn’t be with the child during the holiday; there’s never any mention of Aleph. As far as the child knows, that is who the present came from.

According to organizers, this act certainly ranks high on Maimonides’ levels of charity: “ . . . when one knows to whom one gives, but the recipient does not know his benefactor.”

Aleph has worked with small groups of children in the past to wrap and pack presents, and it has created many joyful and educational experiences for kids, according to Bassie Lieder, who runs social media and marketing for the organization. By opening up this experience to schools throughout the country, Aleph hopes to replicate the acts of tzedakah—and the teaching of the concept in principle and in practice—on a much bigger scale.

Lieder notes that some schools have signed on to the project since it launched, though they hope to interest even more.

“For these children, to be able to get this gift from their loved one is very special,” she affirms. “Chanukah is supposed to be a joyous time. No one should be alone.”

‘It Makes a Big Difference’

For Baila Stern, one concern is that her three children, ages 6, 8 and 10, sometimes feel a bit isolated. For the past five years, her husband, Capt. Rabbi Mendy Stern, has served as a U.S. Army Chaplain, twice performing tours of duty in Afghanistan. Currently, the rabbi is with his family at the U.S. Army base in Fort Hood, Texas.

His wife explains that the whole family sacrifices for the good of the country, and she sometimes dwells upon the fact that her children live cut off from a vibrant Jewish community. For them, receiving packages of any kind is a rare treat—let alone one coming from their father.

Aleph, she notes, has greatly impacted their lives. (Aleph assisted Rabbi Stern with a legal battle to get an exemption from U.S. Army rules regarding his beard.) The organization sends gifts to her children whether or not Stern is abroad. The board games, LEGO building blocks and other toys come with a note from their father.

“It makes a big difference,” she says. “To get something in the mail with their name on it like that is huge.”

Throughout the year, the organization helps the family maintain a vibrant household by sending menorahs at Chanukah time, matzah at Passover time, cheesecake for Shavuot and other holiday items. She was gratified to learn that schoolchildren will be helping to collect toys for other kids. Such acts, says Stern, can only strengthen Jewish pride for all involved.

Especially for those on the receiving end, the Chanukah gifts mean so much.

“My children,” she stresses, “love them and cherish them.”

Schools, organizations, communities and the general public can get involved in the Aleph Institute’s Chanukah toy drive by clicking here.