« Picture of the Day: Young Shluchim Group Photo
Photos: The Faces that Make Up the Kinus Group Photo » 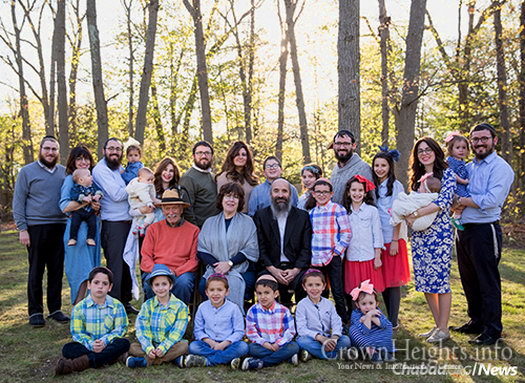 Members of the extended Teldon family, with grandfather Gerald Teldon, middle row, seated at left, and his son and daughter-in-law, Rabbi Tuvia and Chaya Teldon next to him.

Like many retired businessmen who now live abroad, Gerald Teldon, 92, makes a few trips back to the United States each year to visit his grandchildren and great-grandchildren—the 18th of which is due to be born this winter.

But unlike most, Teldon has a son, three grandsons and a grandson-in-law who are Chabad-Lubavitch rabbis, and this week’s visit will be a special one. He will be celebrating with them all at his first trip to the grand banquet of the International Conference of Chabad-Lubavitch Emissaries (Kinus Hashluchim), to take place on Sunday, Nov. 27, in Brooklyn, N.Y.

“I watched the conference live online a few years ago, and it is quite a gathering—quite interesting,” says Teldon, who retired 15 years ago with his wife, Carol, who passed away eight years ago, to San Miguel de Allende, Mexico, from St. Louis. The family is originally from Staten Island, N.Y. “These Chabad Houses do so much good for the Jewish community. Devoting yourself to something like that, to such a cause, really helps remove the pressures of life today for others.”

His son, Rabbi Tuvia Teldon, who has served as director of Lubavitch of Long Island, N.Y., for the past 40 years, says “for my father, this will be an opportunity to immerse himself in Chabad for a day. I’m hopeful that he will have a positive experience. There is so much here for him to discover.”

Gerald Teldon will be joining his family members to form a rather remarkable intergenerational table at the banquet (Table J21, for those who want to stop by and meet him). Included will be Rabbi Mendy Teldon of Commack, N.Y.; Rabbi Moshe Teldon of Wilmette, Ill.; Rabbi Levi Teldon of San Antonio, Texas; Zalmy Teldon of Chicago; and Rabbi Yossi Kamman of Stamford, Conn.

Since his retirement from serving as vice president of international sales and marketing at Angelica Corporation—he worked at the company for 50 years—Gerald Teldon has taken to traveling and enjoys visiting Chabad outposts along the way, in such locations as Prague, Barcelona, Bucharest and Rome.

“It’s nice to meet people in different countries and find out what’s happening in their communities,” notes the nonagenarian. “It’s amazing to see young people who have such an interest in doing good things for others. And I look forward to seeing many of these rabbis at the banquet that I have met throughout my travels.”

He has already spent a week in Illinois and a week in San Antonio with some of his grandchildren. This week, he’ll spend time with his son in New York, which will culminate with the banquet.

“We enjoy his company. He’s the patriarch of the family, and we’re excited to have him in town,” says Rabbi Tuvia Teldon, who just hired the 48th Chabad emissary to Long Island this month. “He has seen our organization grow over the years, and he always gives me good advice. He loves to see our successes and gets a lot of nachas from it.”

‘Apples From His Tree’

Time spent with everyone allows Gerald Teldon to reflect on the direction in which his family has grown.

“It’s interesting to be a great-grandfather to so many people who are involved in this work of Chabad. I’ll be sitting at the banquet with six rabbis!” he declares. “I’m so lucky that they have this positive outlook and the confidence to share it with others. It’s not an easy life, but the commitment makes it worthwhile.”

And for Mendy Teldon, director of Chabad of Mid-Suffolk in Commack, N.Y., his grandfather’s presence at the banquet is a testament to a life dedicated to goodness and kindness.

“My grandfather, in his 90s, is now able to sit and watch and enjoy the fruits of his labor,” says Rabbi Mendy Teldon, 37, who describes him as an energetic, excitable, happy person. “My father went his own way in becoming a Chabad rabbi; he was committed to a cause and didn’t go into business like his father did. In such a situation, you never know how it will turn out. But now, 40 years later, there’s such nachas from this man who went out on his own. Not only was my father successful, but he raised a family who believed in the same cause and followed in his footsteps. Now my grandfather can enjoy the apples that have grown from his tree.

“He loves to travel the world, and now part of that traveling includes visiting his grandchildren at Chabad centers in the United States as well.”

« Picture of the Day: Young Shluchim Group Photo
Photos: The Faces that Make Up the Kinus Group Photo »