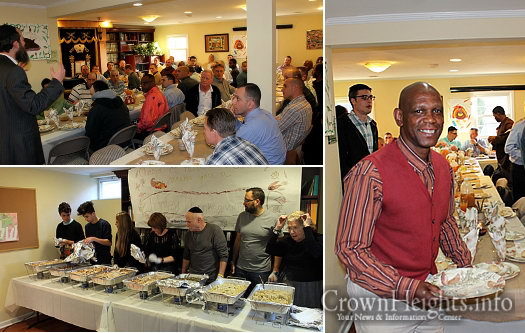 Traci Jacob is looking forward to Thanksgiving, even though she grapples with two autoimmune diseases and has neck surgery scheduled for right after the holiday. Fortunately, the 47-year-old will be able to host a meal with her parents and a friend on Thursday because of Chabad of Hunterdon County in Clinton, N.J. Rabbi Eli Kornfeld, his wife Rachel and volunteers will prepare and deliver a cooked kosher turkey—along with the usual sides of stuffing, mashed potatoes and green beans—to Jacob and others who are homebound.

Jacob, who is on disability and also received a meal last year, says “it makes it a lot easier to bring everyone together. You don’t have to worry about cooking. You don’t have that worry of going out to buy food for the meal, spending money. You have the rabbi and everyone helping you.”

Kornfeld delivered 125 meals last year. He also hosted a Thanksgiving meal at the Chabad House for residents of Freedom House—a local residential treatment facility for men struggling with addiction issues. And he again plans to do so again this week.

It makes no difference whether the recipients are Jewish, emphasizes the rabbi.

“We want everyone to feel part of this day. If it’s meaningful for them, it’s important for an organization like ours to make sure that those who are less fortunate can be lifted up. They should be able to be lifted up in the joys of their community,” says the Chabad rabbi and father of six.

This will be the fourth year that Kornfeld and volunteers deliver meals. On Nov. 24, about 30 volunteers will gather in the morning at the Chabad House to help prepare and organize the food. Then they will start driving the meals around western New Jersey until about 3 p.m., when they will return to the Chabad House to help with the meal for the men who are in treatment. Kornfeld expects to host about 100 people and deliver about 200 meals.

“People come out in droves to get their hands dirty—to cook, to prepare, to cut, to peel, to donate—and I think that’s a big part of this. Bringing the community together, [bringing] those that can offer help with those that need it,” says the rabbi.

‘Unite People With Acts of Goodness’

Kornfeld, 39, adds that the program also boosts the significant number of area residents who have been affected by a current heroin epidemic.

Glenn King was at the peak of his heroin addiction when he entered Freedom House in 1991. He got sober and then started working as a driver for the organization, eventually becoming the executive director.

The nonprofit organization sometimes has “difficulty keeping our doors open,” acknowledges the 58-year-old King. Assistance in the form of the Thanksgiving meal allows the organization to use money that would have gone towards food into requisite treatment.

More importantly, King says, is the joining of various communities—Jews, Christians, African-Americans and Hispanics, among others. This will be the second time that Chabad has hosted the meal. People around the table last year were so appreciative that they stood up and said what they were thankful for; interestingly, reports King, “there was not a disparity [between residents and volunteers] in the expression of gratitude. People seeyortmed to be grateful for some of the same things.”

King notes another important factor: that neither the rabbi nor the volunteers seem to judge residents of Freedom House, which puts everyone at ease.

Kornfeld notes that this year’s meal will be especially important in the midst of concerns about racism and anti-Semitism in the United States. “The desperate hunger for positivity, for kindness, for respect for others is so needed in our country right now, to bridge divides and to unite people with acts of goodness,” he says.

And then there are the benefits to people like Jacob, who in addition to her health problems, which include multiple sclerosis and three herniated disks, lost custody of her children during a divorce when she was struggling with addiction. Still, she awaits Thanksgiving dinner, and then three days later will undergo surgery. She says she has already informed the hospital staff that she would like to see the rabbi afterwards.

As to what she’s grateful for: “I’m very blessed to have the rabbi and Chabad in my life.”

To request a Thanksgiving dinner for someone in need or make a contribution for the meals, contact Chabad of Southeast Morris County.