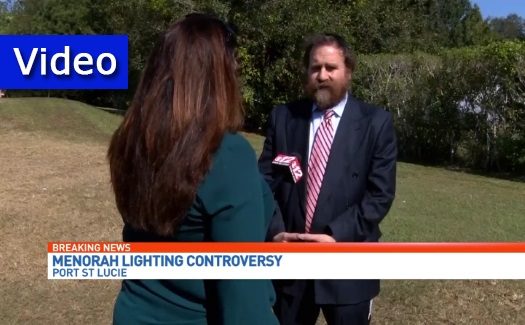 Chanukah Ceremony Back On After Public Outcry

A Florida homeowner’s association reversed its earlier decision to cancel an annual Chanukah event organized by the local Chabad Shliach, after a public outcry claiming unfair discrimination – being that they would be erecting an X-mas tree.

Now Tradition property managers will allow a menorah lighting to continue after coming to a compromise with local rabbis.

Protests from those all over our area showed up on social media, with many claiming the move to cancel the menorah-lighting was discriminatory action, albeit on private property.

For now, a Christmas Tree may stand tall in Tradition Square, but there will be no menorah there until after December 25th.

“I asked them to reconsider,” Rabbi Schlomo Uminer with the Chabad Jewish Center said, “they decided before they are just not having anything religious, but one thing that came up is they are having a tree lighting.”

For several weeks the Rabbi at the Martin St. Lucie Chabad Jewish Center, who supplies the menorah for the lighting of the candles, says he was informed by the community leaders at Tradition last month they would no longer allow religious symbols here. But the property managers today met with local rabbis and came to a different agreement.