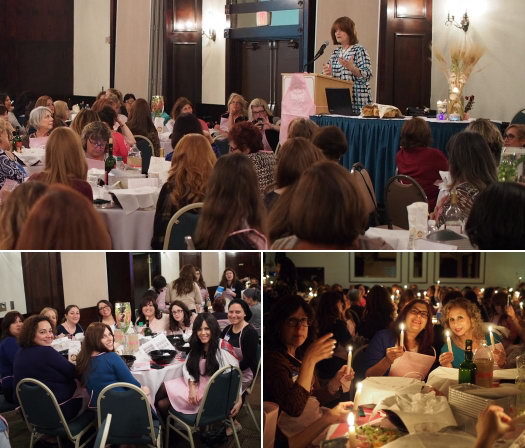 Exactly 24 hours after the Florida polls closed on the most divisive presidential election our generation has witnessed, the doors of the Coral Springs La Quinta Inn ballroom opened on a vastly different scene.

Divested of the voting stations of the previous day, the ballroom was festively decorated with ornately set round tables from wall to wall, flowery centerpieces, candles, and buffets of refreshments.  And, incongruously, black, plastic bowls containing precisely measured ingredients for making challah, the traditional Jewish bread eaten each Shabbat, graced each setting.

The Chabad Centers of Coral Springs partnered with Hadassah in hosting a Mega Challah Bake which included 260 Jewish women, Republican and Democrat alike, joining in the age-old ritual.   It was an evening celebrating Jewish femininity –  where women mix and knead dough by hand, separate and designate a small piece of the dough as sacred to G-d, and carefully braid their own challah loaves.  It’s was also an evening for women to reflect on the power Judaism entrusts to them to shape not only bread, but the fabric and tone of their families, homes, and the entire nation, as centuries of female ancestors have done before them.  But more significantly, it’s an evening of bonding and unity.

Our country now looks back on a season of strife and discord and  like other Americans, the women joining the Mega Challah Bake had followed the candidates, shared opinions on debates and areas of national concern along with evaluating campaign platforms.  Some had even voted in that very same room the day before.  But on this night, they reached deeper within themselves, and in doing so, reached out to others.  These women did not simply put aside their differences; they transcended them.

Chana Denburg, Rebbetzin and co-founder of Chabad of Coral Springs explained Shabbat and how the ritual of challah represented the sanctification of time and space and was an affirmation that the first of all we have is dedicated to G-d, elevating our homes and those within it.

More importantly than our political affiliations is our connection to G-d; in the light of that higher drive, the issues that divide us simply fade.  And that is why women across the political spectrum –  many complete strangers to each other, came together in one room for one goal, each emerging with 259 newfound sisters.