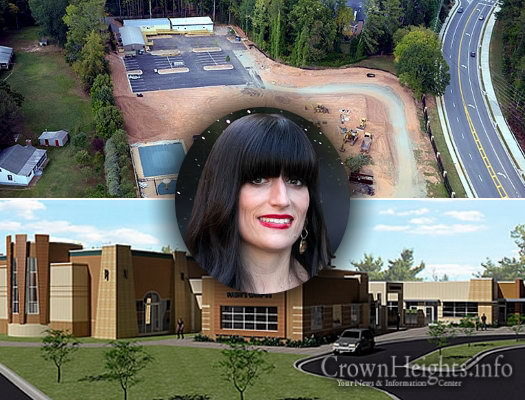 For the past 18 years, the Minkowicz family has served as a beacon of light to Jews living in the tranquil Atlanta suburbs of Alpharetta, Johns Creek and other nearby areas. It’s also now been more than two years now since Rashi Minkowicz—the wife of Rabbi Hirshy Minkowicz and a mother of eight—passed away suddenly at the age of 37.

While she ran many programs, she is perhaps best known for one called “Torah & Tea.” As it grew, she shared her friendship and guidance with women locally and around the world; and after her passing, thousands of those same women, and many more, took it upon themselves to do mitzvahs, good deeds, in her honor. They also began their own local study sessions, bringing together family, friends and community members in intimate settings to learn and grow, and to sit and enjoy kosher refreshments—“food for thought”—as Rashi always provided.

Now, as Chabad of North Fulton in Alpharetta, Ga., prepares to mark a milestone of 18 years (its chai celebration) at a Nov. 13 dinner event, hundreds will gather to toast to the past, present and future of this community.

One of them is Jeannette Sinasohn, who moved her family to Alpharetta nine years ago, and says “the shul has been our second home since day one.”

“I love that everyone can be involved as much or as little as they want,” she says. “As our lives change, our needs change. There is something for everyone, and everyone is important.”

Plans are also moving forward with “Rashi’s Campus,” an expanded new facility that will include a larger synagogue, a social hall, classrooms, space for the Hebrew school, a kosher kitchen and a facility for the Gan Israel summer day camp. Much of the construction work has been done for the foundation, and about 75 percent of the funds needed for the building have been raised.

“Somehow, over the past two years, we have been able to hold our heads high,” says Rabbi Minkowicz. “The community really rallied around us.”

“After the first year, there was a renewed energy and strength,” he continues, “and we’ve been able to keep the mood positive and move forward. . . . I’m very grateful to Hashem.”

Johns Creek Mayor Mike Bodker, who frequents the Chabad center, thinks the world of the rabbi and his family: “I was fortunate enough to meet him when I moved [here] not long after they started. I have seen Chabad grow from an idea to the wonderful community that it is today.”

The Minkowiczes settled in Georgia shortly after they married, like thousands of other emissaries of the Rebbe—Rabbi Menachem M. Schneerson, of righteous memory—who set up homes and Chabad Houses all over the world. The couple went on to have eight children, and as a family, turned their fledgling home-based synagogue into a thriving center for residents and visitors, bringing together Jews of all backgrounds and observance levels.

The goal has been to draw Jewish people in for services, classes, events and programs—sometimes easing an initial reticence for those who have never experienced Chabad. Once exposed to the wealth of Yiddishkeit, says the rabbi, the usual response tends to be: “Wow, my family gets spiritual nourishment here!”

With the loss of Rashi, he adds, there has been a new kind of connection as well—of people feeling comfortable, and offering comfort, because of what they have gone through.

Of the current anniversary, he explains that “the number 18 signifies life. The experience we had makes us appreciate life much more. Now, we have this moment to celebrate the life of our community. To feel and experience a Jewish community that thrives.”

Organizers expect as many as 300 attendees at the upcoming gala at the Alpharetta Marriot.

Event planner Melissa Miller has been friends with the Minkowiczes for a long time. Her children—she now has two in college and one in high school—attended their preschool and the summer camp, and the family has been to many Chabad holiday programs over the years. As there is no local Jewish Community Center, she says “Chabad fills that void.”

Miller notes that the rabbi has long provided counsel to her and her family. “He’s always there for everyone, and he’s always welcoming to anyone. He’s the pulse of the community.”

She adds that he inspires people from other communities to help, physically and financially, which is no small feat.

“I met him a long time ago shortly after they arrived,” said Mike Leven, chairman and chief executive officer of the Georgia Aquarium in Atlanta. “I’ve been a friend of his for many years. I’ve admired his tenacity and what he’s accomplished.”

Leven was an early supporter of the day camp, bought part of the land for the new campus and is a major donor of the synagogue. He states something many think but don’t say out loud—something relevant and practical in the world of building and monetary contributions. “He’s very good and intelligent with the way he handles funding. There’s no waste when you donate to Hirshy.”

“I think the rabbi has done an extraordinary job,” says Leven, reaching out to include others who “would not be involved Jewishly without his efforts and those of his family.”