« Chabad at Wisconsin U. Wins Motion to Expand
Suspect Captured After Bolting from Police Custody » 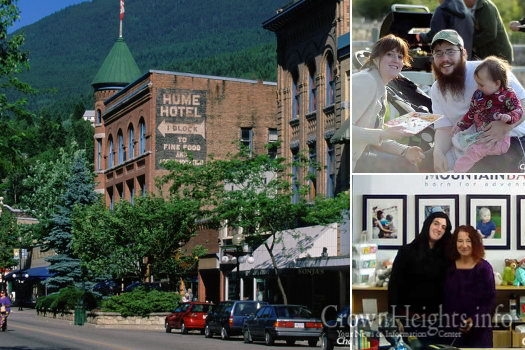 Nestled within Canada’s Selkirk Mountains, the city of Nelson, British Columbia, has neither synagogue nor rabbi. But there are Jews there, according to Judy Banfield, a resident since 1990.

With a long history of counterculture and individualism—tied to the Doukhobor (Russian pacifists) who settled the region at the turn of the 20th century—the beautifully restored town is home to dozens of yoga studios and organic markets, and even has a thriving marijuana industry. (There has been an explosion of legal marijuana production and consumption in Canada in recent years.)

“This is a small town far from everything,” says Banfield. “We are 400 miles east of Vancouver and 400 miles west of Calgary. When some of us had children at home, we would get together more often, but now, it is rare that we gather to celebrate Shabbat.”

However, a recent Shabbat saw nearly two dozen local Jews congregating in Banfield’s home to eat, sing, celebrate and share the weekly holiday together with Rabbi Shmuly and Fraidy Hecht, co-directors of Chabad-Lubavitch Okanagan in Kelowna, 200 miles to the northwest.

Some members had been to Kelowna to celebrate Jewish holidays with the Hechts and their congregation, but this was the first time that most of the people shared the Friday night and Shabbat day meals, which drew 20 participants, some of whom Banfield had never met before.

“It was a wonderful experience for our community,” she says. “The rabbi spoke beautifully, and one acquaintance of mine, who is into Buddhism, was there listening. Suddenly, she falls into my arms, weeping. The emotions were so powerful and strong.”

Banfield, who own an eco-friendly baby and toddler outdoor gear shop, says the rabbi had discussed the possibility of one day holding a communal Shabbat celebration. But she was surprised when he and his wife were ready to do it so soon.

The rabbi says they were inspired to arrange the Shabbat program, despite the significant logistical hurdles, as part of commemorating Hakhel—the yearlong celebration of Jewish unity, Torah study and prayer, which will end with the arrival of Rosh Hashanah.

“We have been holding Hakhel events all over the region,” says Hecht, who has lived with his family in Kelowna since 2010, and has hosted other Hakhel events there, as well as in Penticton, an hour to the south. “The message is very powerful. Each and every one of us is a king or queen, and we must do what we can to influence others to live a better, more G‑dly life.”

The Wisdom of Torah

According to Banfield, the rabbi did just that. “He speaks with such wisdom and humor. We were able to listen to him for hours,” notes the Bronx native, who grew up in a home that was “very Jewish, but very secular.”

“I asked him, ‘How can you be so young and speak so wisely?’ And he told me that it was not his own wisdom, but the wisdom of the Torah.”

Since there are no kosher catering facilities in Kelowna or Nelson, Fraidy Hecht prepared the food for the Shabbat meals at home and then packed it into their van, where the aroma of kugel and chicken soup plied the family’s senses for the duration of their four-hour drive on Friday morning.

Aside from the formal prayers and meals, Banfield say the community enjoyed interacting with the four Hecht children and observing the family dynamic. “We keep on talking about how beautifully they raise their kids,” says Banfield, the mother of two grown children. “The way they teach them, the way they play, the way they clean up their toys.”

Looking ahead, Banfield says the weekend inspired her to lead an effort to explore the possibility of inviting a rabbi to live in the town, where Jewish events are often led by Anat Grebler, who has lived in the former Soviet Union and Israel, and is steeped in Jewish mysticism and Torah.

“We are a small and very individualist community,” notes Banfield, “but we would be delighted if we could find just the right rabbi to match this off-beat town in the middle of the wilderness.”

« Chabad at Wisconsin U. Wins Motion to Expand
Suspect Captured After Bolting from Police Custody »