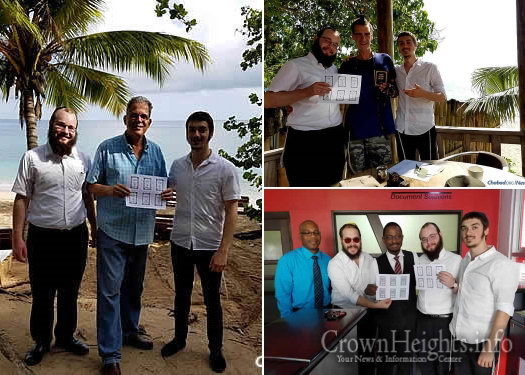 Waves crashed on the shore and palms trees swayed in the wind as the Jamaican sun baked down on two rabbinical students standing in dress pants and starched white shirts. They were fiddling with a portable printer, with neat stacks of paper meant be bound into Tanyas, the slim but significant volume penned by Rabbi Schneur Zalman of Liadi, the first Rebbe of Chabad.

The young men were Shmuel Butler and Aryeh Herson, who had come to the Caribbean country to assist Chabad-Lubavitch emissaries Rabbi Yaakov and Mushkee Raskin, who arrived there in 2014 to serve the Jewish community.

In addition to traveling the island in search of Jews with whom to connect, study Torah and perform mitzvahs (as “Roving Rabbis” have been doing since the late 1940s), the duo was on a mission to print Tanyas in six cities: Negril, Falmouth, Ocho Rios, Montego Bay, Kingston and Port Antonio.

It’s a tradition that began in 1978, when the Lubavitcher Rebbe—Rabbi Menachem M. Schneerson, of righteous memory—called for the printing Tanyas all over the world. Since then, more than 6,700 editions have been printed, with thousands of people touched by the wide-reaching and never-ending endeavor.

The Rebbe specified that at least 100 copies should be printed wherever Jews may find themselves, and that those local Jews actually learn from the freshly imprinted pages. But it was more than just a learning campaign, he explained. For if the goal was simply that everyone should study Tanya, it would have been sufficient to simply send copies to the Jews of each city and encourage them to study. Rather, the Rebbe said the fact that the Tanya was printed in their own hometown would encourage them to study and explore the text on a much deeper level.

Additionally, the very act that the Tanya (a foundational Chassidic text) was to be printed in so many locations would further the goal of having the wellsprings of Chassidism “flow” from every part of the earth, which theMoshiach himself had told the Baal Shem Tov in a prophetic dream would usher in the Final Redemption.

And so began a campaign to print Tanyas in every place where Jews live.

“While country after country was being covered, there were some locations that needed unique attention due to their delicate circumstances,” relates Rabbi Sholom Jacobson, who has coordinated the campaign for decades. “In the case of Communist China, the government censors refused to allow the Tanya’s publication without their review. Upon the Rebbe’s instruction to Rabbi Fishel Katz [a traveling businessman who printed many editions of Tanya at the Rebbe’s behest], they were given an English translation of the Tanya, and after a significant wait, the printing was approved and allowed to move forward.”

In an in-depth discussion with theDerher magazine, Jacobson recalled the discussion about printing a Tanya in Iran, which was then ruled by the pro-Western Shah. The Rebbe initially counseled against printing a Tanya there. When the government was about to fall to Islamist revolutionaries, the Rebbe consented to theTanya’s publishing, and Rabbi Sholom Ber Hecht—who was in the country at the time directing Lubavitch efforts to spirit Iranian Jewish youth out of the country—moved quickly to complete the project before it would be too late.

After they concluded the printing and exited the building with the fresh copies, a shell landed on the printing press and destroyed the entire facility.

In 1982, the Israel Defense Forces entered Lebanon in what was called the “Peace in the Galilee” campaign to arrest the advances of the PLO in the area.

At that time, a small group of Chassidim—led by Rabbis Leibel Kaplan and Rabbi Aharon Eliezer Ceitlin of Safed in Israel’s north—worked tirelessly to print the Tanyain the cities throughout Lebanon, in a project that provided the Rebbe much satisfaction. The Rebbe instructed them to print the Tanya in the capital city of Beirut and even to attempt a printing within the Presidential Palace.

In a public address, the Rebbe spoke about the Israeli military presence in Lebanon, pointing to the Tanyas as “evidence” of the IDF’s presence in the city.

“Here on the table lies a Tanya that was printed in Beirut a few days ago, with enough time for it to arrive here so that it can be on the table during this gathering!” said the Rebbe, lifting one up for all to see.

By the time Butler and Herson landed in Jamaica, some 6,787 editions of the Tanyahad been printed all over the world. (Each printing is issued a unique edition number and includes the location of its printing on the front page.)

Butler procured the rights to print editions 6,788 to 6,793, and even brought along a small, high-speed laser printer to assist in the process (he had previously printed many Tanyas in a number of New England towns and islands, including Martha’s Vineyard and Nantucket). He says that the customs officials initially gave him a hard time, suspecting that he was importing electronics into Jamaica, but when the official saw a copy of the Tanya that he had placed atop the printer, “he just put down the book and waved me respectfully past.”

Coordinating with Raskin, the pair planned a careful itinerary for printing and study in each of the six cities they had selected.

But nothing goes exactly as planned, which was why the students and a few local Jews found themselves standing over an overheating printer on a beach in Ocho Rios. But as the Yiddishsaying goes: “Man plans and G‑dlaughs.” Seeing their operational woes, a Jewish man who had recently arrived in Jamaica to manage a local hotel ambled over to see if he could help, and another Jewish connection was made on the island.

Through the efforts of a number of very accommodating (non-Jewish) technicians who worked overtime on a Sunday—and with the special delivery of extra toner—the Tanya was printed on time in all six locations.

“The trip was phenomenally successful,” notes Raskin. “Many people in the community who we do not even see on the holidays reached out and asked to be part of this endeavor, coming to learn from the Tanyas. The rabbinical students also visited many Jewish people and even found several new contacts we had not known about. They brought a great awareness to the local Jewish community, as well as to hundreds of visitors. There is no doubt in my mind that this was a very special summer for the Jamaican Jewish community.”