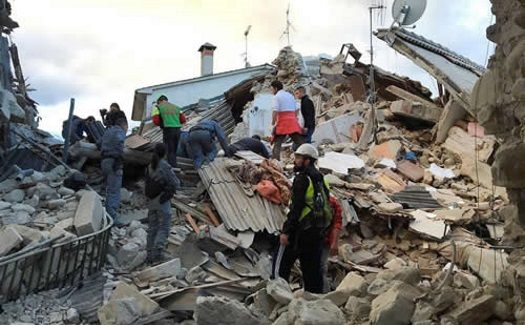 Neighbors, friends and rescuers spent the day Wednesday digging through rubble in the desperate hopes of finding people alive after a 6.2 magnitude earthquake rocked central Italy at about 3:30 a.m., killing more than 120 people. The epicenter was centered near the town of Norcia, Italy, about 100 miles from Rome, where buildings also reportedly swayed from the resulting tremors.

Rabbi Menachem Lazar, co-director of Chabad Piazza Bologna, Rome, with his wife, Rivka, took to social media to help coordinate relief efforts among members of the Jewish community, as well as with earthquake specialists inIsrael. In an early-morning posting, he wrote: “Chabad has received requests for help and of people asking to help. We are trying to coordinate. If you need help, please contact us.”

He also used to Twitter to let people know that Zaka, an Israeli search-and-rescue team, was ready to join in the search for survivors and was awaiting the green light from Italian authorities to enter the country.

Strong aftershocks measuring as high as 5.5 on the Richter scale continue to shake the ground there.

Italy has a history of severe earthquakes, including a quake in 2009 that killed 300 people.