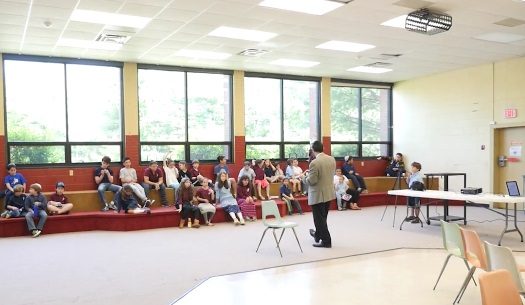 The Jewish Academy of Suffolk County is creating an exciting and innovative new chapter in education for the local Jewish Community, under the guidance of renowned Crown Heights educator Shimon Waronker, which was featured in Newsday today.

Shimon Waronker, who has sought to transform education in several New York City public schools with a combination of private school practices and his own techniques, is bringing his self-styled “revolution” to a small academy in Suffolk County.

As the new head of school for The Jewish Academy in Commack, Waronker plans to eliminate the traditional model of teachers talking to rows of students and fully implement his program with the start of the 2016-17 school year.

His method includes a focus on team teaching in open classrooms where educators share a large space with several classes of students, as well as techniques that foster discussion — such as the “Harkness table,” the time-tested approach at Phillips Exeter Academy in New Hampshire advanced by philanthropist Edward Harkness in the 1930s.

He also keeps students with the same teacher for several years, as Waldorf schools do, and designates master teachers to mentor less-experienced colleagues, as well as increasing salaries and instituting merit pay.