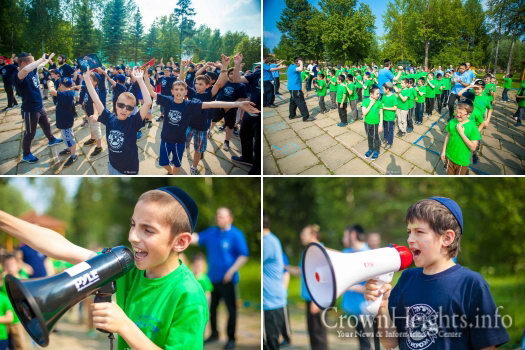 There are a few different camps for boys, of different ages and levels, going on in Moscow this summer. The camps were initiated by the Chief Rabbi of Russia, Berel Lazar, in order to enhance the pure Yiddishe chinuch of Jewish children in Moscow and in all of Russia.

The camps are run by a dedicated team of directors, generals and counselors, many of whom are students from the Moscow Yeshivos.  They are located in the community’s various educational campuses.

In honor of Shnas Hakhel, the camps came together in a powerful display of unity, for a day of learning and davening together.

Camp Tzeirei HaShluchim arrived at Camp Gan Yisroel in Istra for a Hakhel Day that surely made the Rebbe proud! It began with a hearty line-up, with the children reciting the 12 Psukim, and continued with chassidishe niggunim and and songs of yearning for the geulah and Moshiach.

The camps would like to thank Rabbi Y.Y. Lipsker and Rabbi Moshe Elkin for their dedication to making the camps in Moscow such a success.