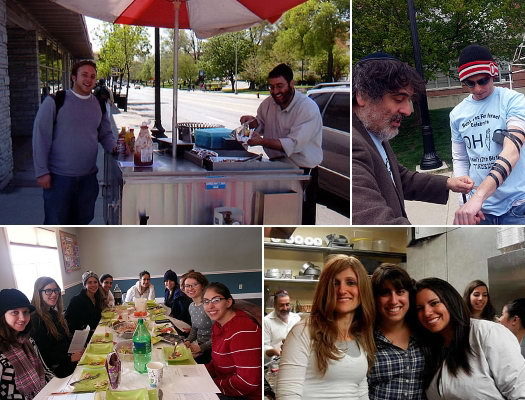 Students at Ohio State University have become accustomed to seeing a rabbi push a hot-dog cart around campus; in fact, they look forward to it.

For the past 20 years, Rabbi Zalman Deitsch, director of the Schottenstein Chabad House at OSU in Columbus, has made his rounds around the Oval—the main grassy area on campus—to dormitories and university buildings, meeting new students and connecting with familiar faces.

Call it a little food for thought.

“We started the hot-dog cart as soon as we got here,” says the rabbi. “It was an excellent avenue to meet students who would otherwise not come into the Chabad House. We met many Jews, of all walks of life, because of this cart. These days, it is usually parked on the main intersection of campus, and thousands of students pass by between classes, asking questions and enjoying delicious kosher hot dogs with all the fixings.

“We cater to the students intellectually, spiritually and even through food.”

Deitsch and his wife, Sarah, moved to the campus in Columbus, Ohio, in 1996, when their second child was just 5 weeks old (they now have seven children). Setting up shop on one of the country’s largest universities—nearly 65,000 students attend—they were excited to take on such a challenge and moved into a location right on fraternity row, with their personal home just next to campus.

“There was obviously no Facebook in those times, so just we had a list of Jewish students and started personally calling them,” recounts Sarah Deitsch, co-director of the Chabad center. “It was a challenge at first to find students to invite.”

Jake Lowenkamp remembers the fall he started school, when Rabbi Deitsch pulled out a shofar for Rosh Hashanah and blew it for students, wherever they were. It made a powerful impression, such Jewish pride on campus. Since then, the English major and upcoming senior hasn’t missed a Shabbat, and is now even a member of the Chabad student board.

“Chabad has allowed me to be more comfortable and proud of being Jewish,” says the Cleveland native. “I pay more attention to Israel-related topics and am more aware of Jewish issues.”

Many of the standard Chabad on Campus programs now found across the country were instituted at OSU, among them “Kabba-lates” (Kabbalah meets Pilates), “Pizza and Parsha,” Friday-night meals in the dormitories and their famous midnight breakfasts (once a month on Saturday nights), where together the Deitsches cook made-to-order omelets, pancakes, French toast and grilled cheese for students who eagerly wait in line.

“The way to draw students in was to learn about them and find out what they were really looking for,” says Sarah Deitsch. “We had to cater to what interested them, including food—kosher food.”

For the sports and fraternity-oriented campus of OSU, this has also translated into a hot-dog eating contest between OSU football players and Jewish college students.

More academic involvement includes the “Ambassadors for Israel” program that encourages Israel advocacy and education among students. And this past year, OSU had the most Sinai Scholars of any campus, with 49 students enrolled among three classes, and has led 10 different Birthright Israel trips.

“We are always guided by the Rebbe’s vision and dream in whatever we do,” says the rabbi. “It’s a labor of love. It has been a long, challenging, loving journey, and we really owe it to the Rebbe. It’s all because of his blessings.”

Aaron Evenchik, a student from 1994-2001, says “the impact that they’ve had on me has been tremendous.” His wife, Courtney, also attended OSU Chabad. “They were always willing to try anything and go anywhere at any time to meet with students. They have a willingness to do things. We always knew that their house was always open to anybody. These are reasons for their success.”

Evenchik expresses amazement at the number of students who were connected to the Deitsches, even if they never attended a Shabbat meal. The rabbi has been known to seek out students on campus, in their dormitories, fraternities, the dining hall. He spends time with them, makes connections, and encourages them to find meaning in Jewish life and practice.

“He uses creativity to reach out to people,” says Evenchik, now a lawyer in Cleveland. “I haven’t seen much change from the early years; I have just seen it get better. We admire them, and they have truly set the standard for what Chabad on Campus looks like today. And for us, whatever we saw being done in the Chabad House, that’s how we run our own home now.”

In 2014, David and Eda Schottenstein and Joey and Lindsay Schottenstein renovated the Chabad House to update the aging building. It includes a large living room and kitchen, with front and back yards, and, of course, a synagogue, where Shabbat and weekly services are held. When their children were young, the Deitsches would settle into the Chabad House every Shabbat, but now, students fill up the bedrooms to enjoy a full Shabbat experience.

In their first year on campus, 40 students could be found around the Deitches’ Shabbat table; these days, it’s more like 140 students. The growth has been exponential, to the extent that another Chabad couple, Rabbi Levi and Aviva Andrusier, has moved on campus to direct operations there.

“When we started out, we were the same age as the students,” recalls Sarah Deitsch. “Now we could be their parents. But we still have a young energy that keeps us going.”

An Integral Part of Their Lives

For Jake Chevlen, who graduated from OSU in 2014 and is a medical student at nearby Ohio University, the Deitsches have met their unique challenge of accommodating the broad spectrum of Jewish life at the university. “They work hard to connect to students at their own level. For example, they go around the Shabbat table every week—no matter how many guests are there—and encouraging each person to share a Torah insight, story or pick a song.”

And for Michael Glauberman (’12), the Deitsches have been a support system on which he can rely during difficult times.

“They have helped me through a lot of things and were really there for me,” attests Glauberman, a golf professional in Chicago. “They taught me that everything happens for a reason, and that we can grow from our experiences. They helped me re-establish my faith in G‑d and understand the importance of being a Jew.”

Alumni Ellie and Jeff Berlin (’08) met at OSU Chabad. Ever since, they say, the Deitsches have been an integral part of their lives—visiting them, for example, a few days after the birth of their first baby. Ellie Berlin, who works as a photographer, says: “Sarah is always there for me. I know I can call on her when confronting any life issue.”

She goes on to say that “they want Jewish students to meet each other and to experience that Judaism is full of joy, to see the beauty in it. There’s never any pressure to do more than you’re comfortable with. They just want you to be aware of your heritage and what it means to be a Jew. They educate in a way that’s not condescending.”

For Berlin—and many other students and alumni—it’s the Deitsches themselves who have had the most profound effect during their time on campus. “It’s their relationship with each other, their kids and the students that exemplify what a Jewish family can be,” states Berlin.

Alumna Sarah Friedman (’08), who runs an organic skin-care company out of Cleveland, echoes this sentiment.

“The most special part of the Deitsches’ Chabad House is them. They draw people in by being who they are,” says Friedman, who speaks to Sarah Deitsch on a regular basis, and whose wedding was officiated by Rabbi Deitsch.

“They are creative, unique, inspiring individuals who really take the time to get to know students on a personal level. They become your family when you’re on campus. They open their Chabad House and their personal home to students, and it’s like having a separate set of parents on campus. Watching them in their daily lives and in their relationships is very inspiring.”