« Picture of the Day: Tefilin in the Traffic Jam
Gan Yisroel-NY Campers Treated to Hypnotist Show » 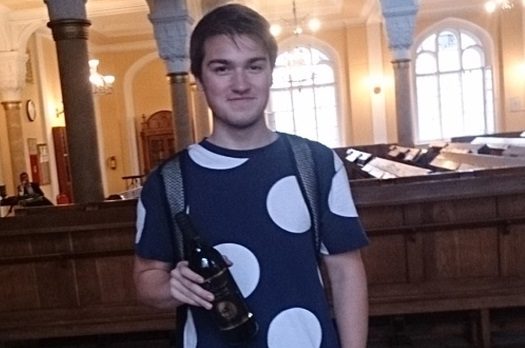 Daniel Gurevich holding a bottle of wine he won for catching a Pokemon at the Grand Choral Synagogue of St. Petersburg, July 2016. Photo courtesy of Jewish News Petersburg.

As the ‘Pokemon Go’ phenomenon grows, some institutions connected to European Jewry’s darkest hour – such as concentration camps and Holocaust museums – have taken precautions against it, citing the need to respect the memory of the dead. But in Russia, one Jewish institution with a troubled past is taking the opposite approach.

From the JTA by Cnaan Liphshiz:

In St. Petersburg, the Russian city’s main synagogue and Jewish community center is doing its best to lure players to the building’s majestic interior — by offering a bottle of kosher wine to anyone who catches a Pokemon there.

The first winner was Daniel Gurevich, a local Jew whose Pokemon hunt last week at the Grand Choral Synagogue of St. Petersburg was the second time he ever visited the place, according to a report Monday by Jewish News Petersburg. Shuttered by communists in 1930 and destroyed almost completely by Nazi artillery during the vicious fight for Leningrad during World War II, it was rebuilt in the 1940s but was allowed to function only as a sham shul — a prop in the Soviet Union’s propaganda about its citizens nonexistent freedoms.

Gurevich told the news site that he came to the synagogue after its staff posted an invitation to Pokemon hunters on the synagogue’s Facebook page, which local media quickly reported. “I was rollerblading nearby, I opened the news [on the smartphone] and saw that the synagogue wants me to come and look for Pokemons. Immediately I went and caught one. It’s great that our synagogue is on the crest of fashion,” he said.

Click here to read more at the Associated Press.

« Picture of the Day: Tefilin in the Traffic Jam
Gan Yisroel-NY Campers Treated to Hypnotist Show »