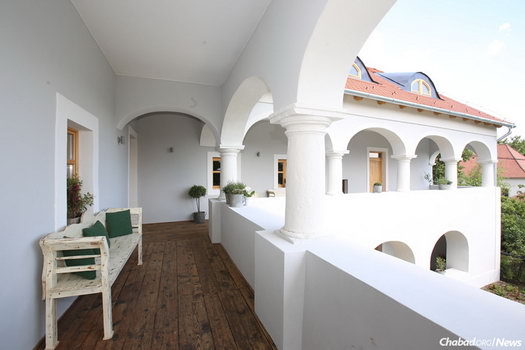 For almost 150 years, the hum of Torah study was constant in the three-story complex that housed the rabbi’s home and yeshivah in Mád, a village in northeastern Hungary in the heart of the Tokaj wine-making region.

Then came the spring of 1944, when the area’s Jewish population was herded into the synagogue next to the yeshivah and kept for three days before being sent to the ghetto in Sátoraljaújhely (Uyhel in Yiddish), and then to Auschwitz.

For years, the building sat silent, abandoned and crumbling. It was used as government housing for several years, but its denizens all left by the 1990s, leaving the halls that had seen generations of Torah students to gather dust. Nearby, the grand synagogue, built in Baroque style at the end of the 18th century, crumbled as well, its grand arches and gables sagging.

The synagogue was restored in 2004, and the rabbi’s residence and yeshivah followed suit this year through the efforts of Lubavitchof Hungary.

And on July 13, the new campus, which includes a museum detailing the area’s rich Jewish history, will open with an official ceremony presided over by the minister of the Hungarian prime minister’s office, János Lázár.

The building now includes a commercialkosher kitchen, guest rooms, lounge areas and a dining hall. The furnishings blend sleek modern functionality with unique vintage pieces culled from the Hungarian countryside. And the rabbi’s study has been outfitted with some 500 books on Judaism, along with various exhibitions on Jewish life and worship.

Just weeks after the grand opening, the premises will once again be filled with the sound of children learning Torah and celebrating Judaism.

They will be there under the rubric of Alef Kids, a Chabad-sponsored organization in Budapest that provides education, entertainment and a host of programs to hundreds of Jewish children.

“Camp is an especially powerful experience,” says Devora Hurwitz, who directs Alef Kids. “This is an opportunity for the children to just enjoy being Jewish, and to express pride and excitement in their Jewish heritage.”

Hurwitz notes that for the past four years, Camp Gan Israel there—which attracts as many as 60 children from Budapest each summer—has been running out of a resort near Lake Balaton, about 90 miles southwest from the country’s capital.

While two staff members will fly in from Israel, Hurwitz points out that the other nine counselors are Hungarian-born, many of whom received their own Jewish education through the Alef Kids Hebrew school, Shabbatons, camps and other programs.

“There are groups of Chassidim from the U.S. and Israel who come here to visit the resting places of the rabbis buried here,” explains Frank, who moved to the region from Budapest five years ago. “Now they are able to sleep here, cook their meals in the kosher kitchen and even pray in the synagogue.”

Some of the noted Jewish leaders buried in the area include Rabbi MosheTeitelbaum (the forbearer of the Satmar Rebbes, who is buried in Uyhel) and Rabbi Shayale of Kerestir.

Frank says the newly refurbished complex and museum are vital to the local population as well. In addition to helping residents understand the manifold contributions of the Jewish communities that once flourished in their midst, the facility draws tourists to the area, which boosts the economy.

Still, the fact that Hungarian-born Jewish children will once again be studying Torah and praying in the long-abandoned yeshivah is something that Frank calls “exceptional.”

“It will be just wonderful to hear the children sing Jewish songs, learn Jewish traditions and celebrate Shabbat here in Mád,” she enthuses. “This is something no one could have ever imagined.”